The Return of Dolson 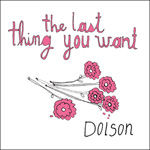 Those who became fans of Andy Dolson’s rocked-up singer-songwriter music when he released his debut EP Tide in December in 2005 and wonder where he’s been for the past two years, rejoice.

The Akron-based musician celebrates the release of a new five-song EP, The Last Thing You Want, at 8:30 p.m. tomorrow at Musica in Akron. He’ll be sharing the bill with fellow Akron singer-songwriter Pete Nischt. Tickets are $10.

Shortly after the release of his last effort, the EP Whisper, in November 2007, and shortly before graduating from college, Dolson took a break from music to get his bearings on real life. But music drew him back, and he’s been working in his home studio with Akron guitarist Jonathan Penn on material for a new album, Eightynine.

That album is scheduled for release in the fall, but to reconnect with his fans, Dolson’s put five of those songs on this EP. They include the title track — whose anthemic melody, surging piano and urgent vocal suggest Bruce Springsteen — and “I’ll Never Be,” which has a pop-funkier vibe and showcases Dolson’s plaintive, heartfelt singing.

You can preview the music or get more information here and here. —Anastasia Pantsios