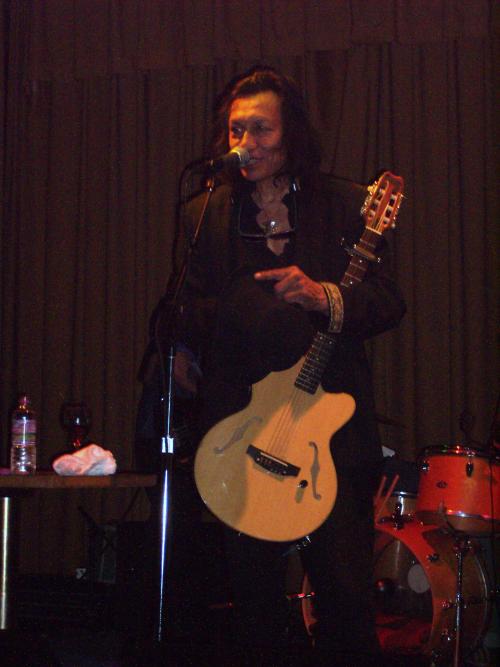 “I’m honored and pleased and privileged to be here,” Sixto Rodriguez said at the beginning of his hour-long set at the Beachland Ballroom on Friday night. Rodriguez, the 66-year-old Detroit-based singer-songwriter whose career has gotten a second look thanks to a pair of reissues on the indie Light in the Attic label, adjusted his black hat and sunglasses and then added, “I love this place.”

Maybe so, but the soft-spoken Rodriguez appeared to be barely holding it together when his show began, his slight voice recalling Bob Dylan's, as he essentially whispered his way through a few songs. Four songs into the set, however, Rodriguez relaxed a bit, delivering “Can’t Get Away” with more confidence, thanks in part to a three-piece backing band of younger dudes who gave him plenty of direction and provided the songs with the appropriate amount of garage-rock grit.

From that point on, the set was mesmerizing. “Sugar Man,” a tune that wouldn’t be out of place in a David Lynch film, was delivered with a series of twisted guitar riffs that made it every bit as brittle as its studio version. The ballad “I Think of You” was a little tepid but worked in an Elliott Smith/Daniel Johnston sort of way.

None of this came off as pretentious, however. Instead, Rodriguez’s banter charmed the audience while he sipped from a glass of red wine. The set came to a strange, awkward end (it really wasn’t clear that the show was over), before Rodriguez returned for a two-song encore — though it took some encouragement from the sparse crowd to get him back onstage.

“You can see I’m developing as an artist,” Rodriguez said at the start of the encore. “Consider this gig a big step in the right direction.” That's an appropriate summation of his performance. —Jeff Niesel