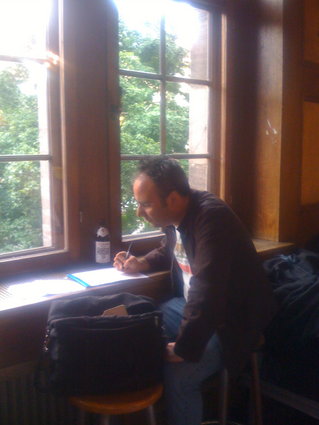 It’s a long drive to St Etienne France, a town no one seems to know about. We drive basically across Switzerland, and the landscape is always impressive. At a truck stop we buy an epoisses cheese and some other really stinky cheese from a cheese shop located in the complex. There’s something you don’t see at the Flying J at Breezewood! A friggin’ gourmet cheese shop! Fuck yes! With the aid of The Squirrel’s secret bread cache, we feast on the cheese while a Swiss Air Force jet steaks across the clear blue sky. (I didn’t even know Switzerland had an Air Force. As far as I knew, they just made those Swiss Army knives with spoons and toothpicks in ‘em.)

St Etienne is kind of a dirty little town located within rolling hills of Southern France. It feels like the whole place could use a good spray with a hose. The Thunderbird Café is located on a tiny rue that is more like an alley. It is owned by an American expat named James that tells me he’s from Corpus Cristi, Texas. And St Louis. And San Francisco. And Indiana. He’s drifted around a lot, then hooked up with a French girl in San Francisco, and then moved here. He’s a good guy that combines the frankness of a New Yorker with the shrug of the shoulders of a French peasant.

The club itself has the worst load in I have ever seen or heard about. Let me repeat this… This is the worst load-in in the entire history of rock. The small upstairs bar is a wooden room with a small circular bar. A few wooden benches are placed around for some seating away from the 10 or so stools at the bar. The performance space is downstairs in a space that feels like a basement in a 1970’s suburb house. It’s really tiny.

The best part of the whole deal is the dark wooden circular staircase that is used to get to the basement. It’s incredibly steep and tight, like a lighthouse. We physically can’t get Ken’s bass cabinet down there, and Gary’s Marshall is total overkill. It’s like loading gear into a WWII German submarine.

James opens a bottle of local rose and a white wine. He tells us, “If ya want anything, just ask for it. I ain’t gonna guess what you want.” He is running the rigged up sound downstairs, tending bar upstairs, bar backing, and talking to the locals who must have been sent by some Hollywood casting agency as “French people”. He is really busting his ass.

We share gear and dinner with our opener, a band called The Original Haircuts. James produces a couple rotisserie chickens with green beans, and the bands attack them like raccoons. As showtime approaches, it’s a really weird scene. People drift in and out of the bar, and the women make all make eye contact with me. It’s very odd after being in Switzerland and Germany where everyone pretends everyone else doesn’t exist, like you do if a homeless person walks by you mumbling in NYC. We go to the now hot basement of the club and try to dial in the sound to the totally empty room. No, you didn’t read this wrong. We start to play to not a single person in the tiny basement room. After the first 30 seconds of the first song, about 20 people walk downstairs. Incredibly, they actually fill the room to a respectable level.

When you stop to think about it, it is almost inconceivable that 4 grown men flew across the Atlantic Ocean to play a basement in an obscure French town on a Monday night. Yet, there we were. Most people stand almost motionless, bobbing their heads depending on if they like the roots stuff or the garage rock stuff. I wind up focusing on a cute brunette that is dancing unselfconsciously in front of us. Sweat pours off of all of us, as the air is completely motionless and dead.

After the show, many of the people stop to offer compliments in very rudimentary English, or a stream of unintelligible French. We sell exclusively vinyl records at the merch table. It’s old school all the way tonight.

I sit down on one of the prison benches and gulp down water. Out of nowhere an Arab looking guy with an impressive looking gap in his front teeth sits down next to me. If he wanted to, he could floss with his pinkie. Seriously. He starts speaking rapid fire French at me. No parlay vous Francois. Not a problem to this guy as he continues to try and plow ahead with communication by repeating the same thing over and over again. It sounds like this…“Say fwa?” I don’t know what you are saying. “Say fwa?” Huh? “Say fwa?” I don’t speak French. “Say fwa?”

Christina, the dancing brunette, sits down across from us, and Arab guy asks her to translate. She speaks just enough English to tell me, “I can’t understand him.” Is it his dialect? “No?” He’s speaking French, right? “Yes.” Why can’t you understand him? “I don’t know.” Oh…OK then… She tells me how much she loved the band, and kisses me on both cheeks just like a French movie. Leo has befriended the town drunk, who looks like an extra from a Truffaut film. He gestures wildly and drunkenly slurs what sounds like, “Ze tu fat u za she zu za fwa!”. Hey man, keep partying. Leo turns to me and says, “We are so in France right now!”

The plan is to stay at the owner’s place. He has repeatedly warned us that our gear will not be safe in the van. Great. We have to wait for him to toss the last of the town drunks out of his place, and then load all the gear into his house when we finally get there. We watch all kinds of folks stagger out, and Leo’s buddy zeros in on us to say goodbye about 17 times, repeatedly hugging everyone.

We follow James through twisting and turning roads all over town. There is no way we could have possibly found his place with written directions. We load in everything but the cabinets inside his haphazard house, with darkness obscuring the sketchy neighborhood around us. Krusty and I find an abandoned bedroom upstairs. I brush my teeth in the bathroom and find Ken uncharacteristically snoring loudly when I get back.