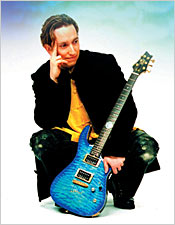 Guitarist Neil Zaza has announced the return of his Christmas extravaganza "One Silent Night" to PlayhouseSquare. The instrumental-oriented holiday show combining Zaza’s rock band with an orchestra will take place at the Palace Theatre on December 11.

Zaza launched "One Silent Night" in 2002 and reprised it (with variations in musicians, repertoire and staging each year) from 2004-2007. The show features rocked-up versions of holiday favorites and traditional carols, as well as some surprises each year (in the past, they’ve included guest vocalists, a gospel choir and an appearance by the Singing Angels), set to theatrical lighting and special effects. Zaza’s dazzling technique and the emotionalism of his playing provide the anchor for the entire production. Zaza also released a double-live CD recorded at the 2006 show.

It caps a busy year for Zaza which has found him continuing to tour, giving clinics and participating in “Rock Boot Camps” — intensive training weekends for aspiring musicians, held around the country. He’s contributed guitar tracks to recent releases by Ripper Owens, Chuck Mosley and Fabio Colella, an Italian musician who has played drums in Zaza’s band. He’s also revamped and updated his website.

Tickets for "One Silent Night" start at $30 and range up to $75 for “rock star seating.” There are also group and family discounts. Tickets ordered by September 30 will also get an unreleased demo with a download code. For more information and to order tickets, go here or call 440.655.9436. —Anastasia Pantsios