Out Today: Alice in Chains 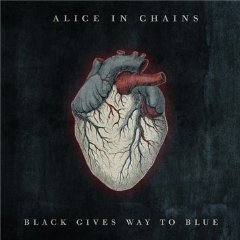 It’s funny that one of the first lines on Alice in Chains’ first album in 14 years claims, “There’s no going back to the place we started from.” Because for the next 54 minutes, that’s precisely what these ’90s Seattle rockers attempt to do on Black Gives Way to Blue. The point is clear: After singer Layne Staley died of a drug overdose in 2002, the band was inactive until recruiting Staley sound-alike William DuVall to help pick up the pieces. And with guitarist, singer and songwriter Jerry Cantrell stepping up, Black Gives Way to Blue sounds like vintage Alice in Chains, right down to the druggy murk that coats the album. In other words, they’re going back exactly to the place they started from. Which is a cool thing for fans of the band’s thick sludge of grunge-metal guitar riffage and droning lyrics about death, drugs and hell. Everyone else will have to sift through a set of tuneless songs to get to the good stuff: Cantrell’s awesomely warped guitar on “Check My Brain” and the title tune, a tribute to Staley featuring Elton John on piano. —Michael Gallucci