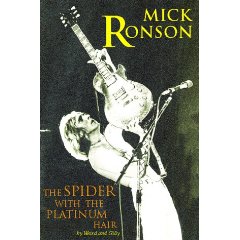 Local authors Karen Laney and Eric Demattio (aka Weird and Gilly) recently celebrated the publication of a revised and updated version of their 2003 book Mick Ronson: The Spider With the Platinum Hair, on England’s Independent Music Press.

They’ll be hosting a book-release party from 6-9 p.m. tomorrow at Blue Arrow Records & Books, where they’ll read from the book and sign copies. There will be snacks and drinks, and Dave Swanson (DJ Slider) will spin tunes that pay tribute to the late guitarist, who came to fame as a member of David Bowie’s Spiders From Mars band in the early ’70s.

Laney and Demattio interviewed dozens of people, including Ronson’s wife Suzi and daughter Lisa, friends, fellow band members and artists he produced and/or were influenced by him, reaching back to local bands he performed with in his native Hull in the early ’60s. Ian Hunter, Lou Reed, Chrissie Hynde, Joe Elliott of Def Leppard and the Clash’s Mick Jones are some of the people who spoke with the authors about Ronson.

The book makes a convincing case for Ronson’s under-recognized impact as a multi-instrumentalist, arranger, songwriter and producer, in addition to his more obvious skills as a guitarist. Laney and Demattio emphasize how well-liked he was and his reputation for being a calm, easygoing, friendly person.

But they skim over his well-known problems with alcohol, which likely contributed to his way-too-early 1993 death at 46 of liver cancer.

In addition, the book contains an extensive discography, useful in tracking the many often obscure projects he contributed to, and a list of his personal record collection, which seems to combine albums he was passionate about and those that probably got passed on to him by management and record labels.

So far, this is the only book about the musician whose guitar sound was a key part of Bowie’s most influential era, a sound that continues to countless influence young musicians today. —Anastasia Pantsios