What to Do Tonight: Ugly Radio Rebellion 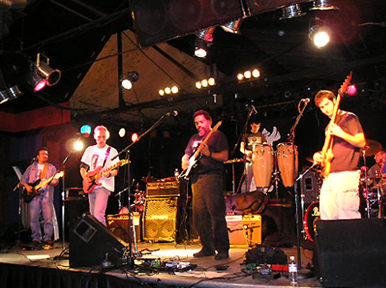 Ike Willis had been Frank Zappa’s guitarist and right-hand man for more than a decade and a half when he made a promise to Zappa just prior to the legend’s passing in 1993. Willis vowed to keep Zappa’s music alive for subsequent generations — an oath he’s kept through his work with Zappa cover bands like New Jersey’s Project/Object and Italy’s Ossi Duri, as well as his own Zappa-inflected music. The next phase of Willis’ career found him moving in both directions at once through his affiliation with Detroit’s Ugly Radio Rebellion. Willis accompanies the Zappa cover band on a deep and diverse set list devised by Ugly Radio Rebellion frontman Scott Schroen. Going forward, Ugly Radio Rebellion will also serve as Willis’ backing band in a configuration known for the time being as the Ike Willis Project. In an interesting twist, the Detroit lineup remained intact after Schroen’s relocation to Atlanta, but he’s now in the process of putting together a second Ugly Radio Rebellion consisting of regional players. Eventually, the plan is to offer both Ugly Radio Rebellion and the Ike Willis Project in tandem, playing a combination of Zappa covers and Willis originals. For now, you can check out Ugly Radio Rebellion when they return to the Winchester (12112 Madison Ave., 216.226.5681, thewinchester.net) at 9 p.m. Tickets: $15. — Brian Baker

Tags: what to do tonight, ugly radio rebellion

Speaking of What To Do Tonight, ugly Radio Rebellion