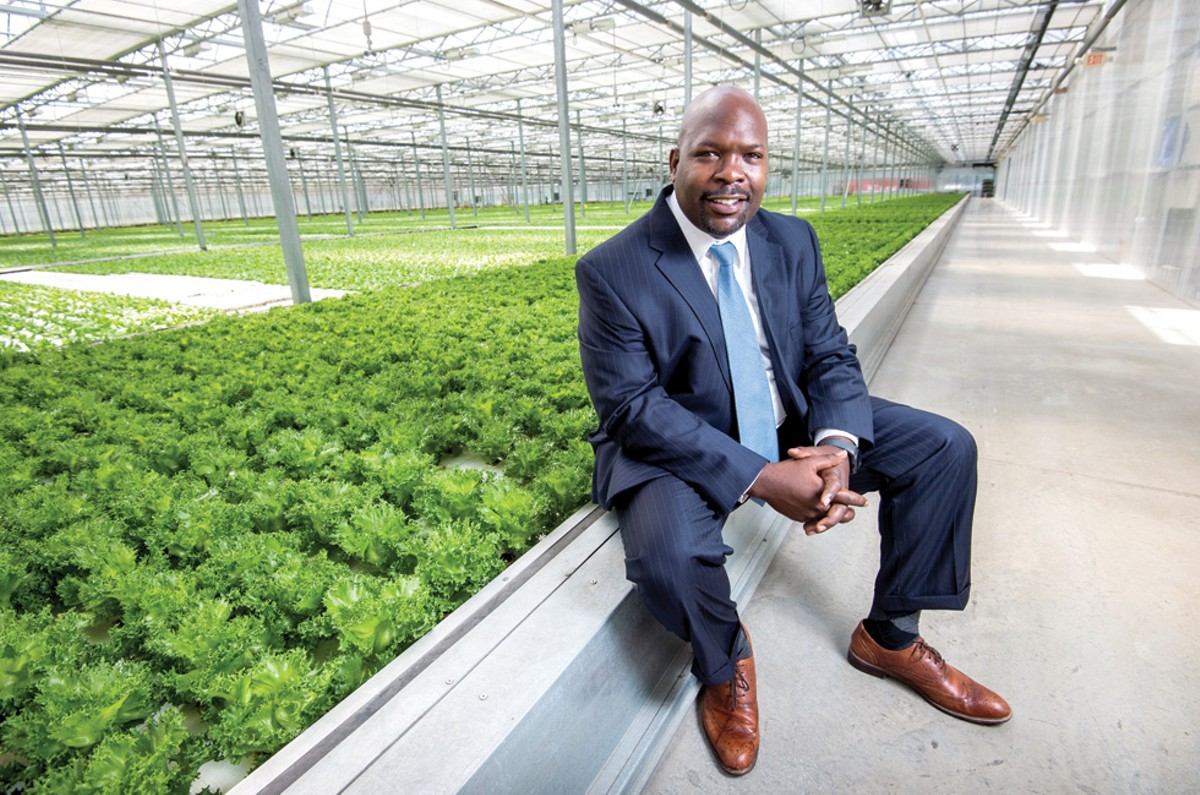 Lights, lettuce and laundry. It's alliterative shorthand for employees of Evergreen Cooperatives that basically describes the employee-owned operation's three areas of business. There's Evergreen Energy Solutions (lights), which encompasses work in LED installation and construction; Evergreen Laundry Cooperative (laundry, of course), which does large- and small-scale work for nursing homes, hospitals and more; and Green City Growers (lettuce), the 3.2-acre hydroponic greenhouse in the Central neighborhood that grows all kinds of lettuce for area restaurants and for further distribution.

Evergreen began back in 2008 with the laundry facility, then the energy solutions business, and finally the greenhouse in 2012. There have been bumps in the road, but lights and laundry are profitable and lettuce is projected to be this year.

Shaker Heights native Brett Jones is the president of Evergreen Energy Solutions and is part of the leadership team that's helped guide the businesses, which employ around 140 people, 60 of whom are members. (Employees can join the co-op after a year.) The whole "mission" aspect of Evergreen wasn't something he initially "got" when he started.

After high school, Jones went to Ohio State, finishing his degree while he was abroad in South Africa. He was a Fulbright fellow and got into global logistics (freighting), founding and working at a handful of businesses before being recruited to run Tri-C's workforce program. It wasn't long before Evergreen sought him out — they were working on a solar project at the time — and Jones signed on to help them with top-line growth in 2012.

"I understood the mission aspect a little at first," he says over coffee at Dewey's in Shaker Heights, where he lives in the house where he was raised, and where his mother was raised before that. "But I wasn't a community development or economic development guy. I was a business guy. So I wondered how we were going to do all this mission stuff, but after six months, I got bit by the bug. It's a reason to get out of bed in the morning.

Jones answers 10 questions when he's asked one. It's an "if this happens, then this happens, and if that happens, then this happens" proposition, all bubbling with passion. For example, Evergreen will find out later this year whether it's the recipient of $5 million of the $100 million available from the Quality Jobs Fund, founded by Federal Home Loan Bank of San Francisco and the New World Foundation with the goal of enhancing local wealth and creating long-term sustainable working families. If Evergreen receives the funding, Jones says it will be a game-changer with ripple effects.

"That will allow us to convert existing businesses into worker-owned co-ops," he says, noting they'd focus on industrial businesses in Cleveland, like tool and die operations. "You have these places where a current owner wants to retire, and they're not private-equity sized companies, but maybe they're attractive to offshoring. So you're converting them to worker-owned, to stay here. There are a lot of baby boomers who are ready to retire and business that may move or close. That devastates local economies, when you lose 10 or 20 jobs in aggregate. That industrial base in Cleveland is still strong and we want to keep that here.

"Motives change when employees own the business," he says. "When you talk about quality jobs, higher wages are part of that conversation, and benefits packages, and opportunities to not only have a living wage but to share in the profits of a company. We can create a new ownership class in America, close that income inequality gap, improve lives, create a new economic class."

Evergreen's living it. Employees, many of whom are refugees or ex-convicts, get access to financial training and affordable mortgages; members attend quarterly board meetings and vote on issues affecting the business and share in the profits. There may be 140 now, Jones says, but there will be more, especially in the LED and energy divisions.

"A new ownership and economic class," he says. "That's the stuff that gets you out of bed in the morning." — Vince Grzegorek