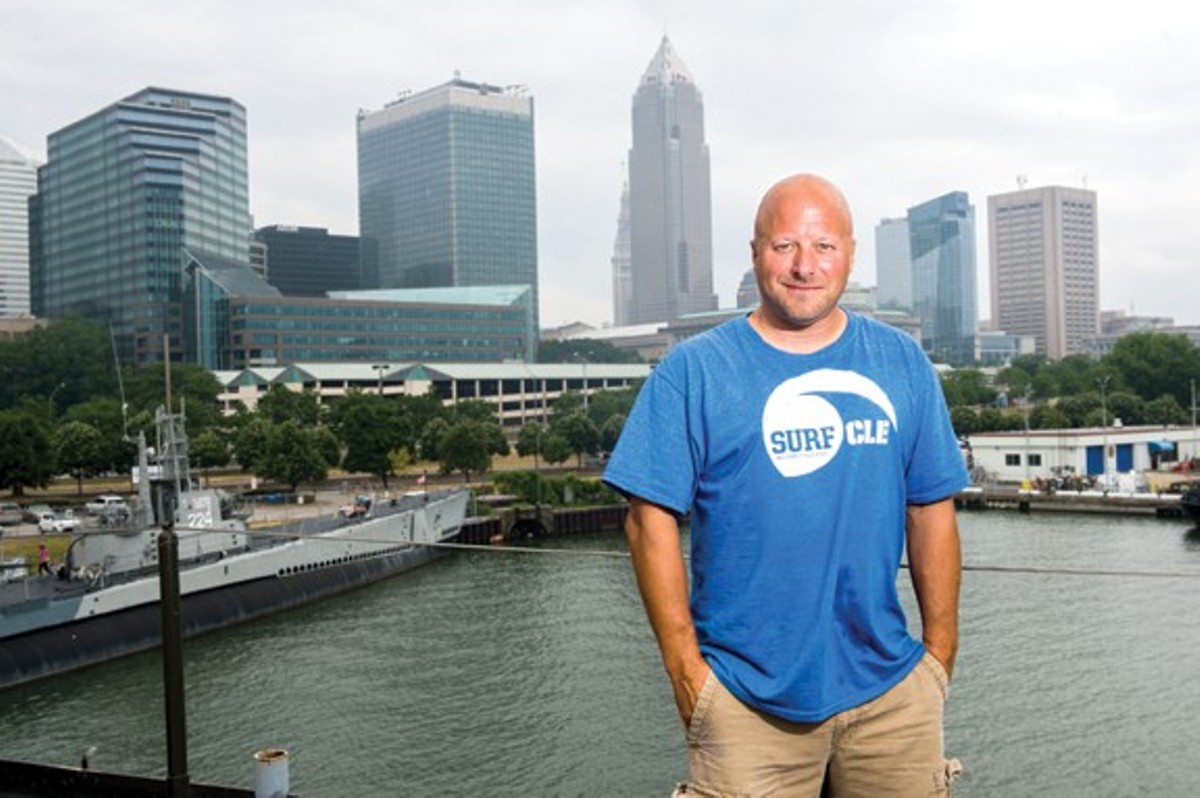 A few days before Scene meets up with Jon Stahl on the roof of his office-boat on Lake Erie, he was crawling beneath a cemetery in Erie, Pennsylvania, eating spiders and trying to locate a geocache item. This is not an unusual weekend story for the adventurous Cleveland businessman.

Here on the boat, Stahl runs LeanDog, a software design company that accomplishes much more than that tagline would suggest. His active-living mindset translates into how he runs his company.

Stahl takes us on a spin through the office, where engineers and designers work in open-office environments and invent new solutions to recognized problems, all while sitting atop the lovely waters of Lake Erie. At a time when Northeast Ohio is striving to re-engage the waterfront, or at least engage it in ways the city hasn't in decades past, the floating office is something of a novelty but also a firm step in the right direction.

As an employee at Nationwide Insurance a while back, Stahl began researching Agile, Lean working habits, a movement of high-performance work that mirrors startups. His studies influenced Nationwide, and the workflow grew into a passion. Employees tend to be happier — and thus granted more freedoms, like, say, access to jetskis when the workday allows — and the company tends to be more innovative and successful. Not a bad path to travel.

LeanDog is just one facet of Stahl's story, though. You might remember his name from the Cleveland Skylift project that was bandied about town a few years ago, the project that would have ski lift-type cars transporting people from, for example, the Flats to FirstEnergy Stadium. Like many ideas floated at City Hall in the past few years, the RNC kind of sidelined this one. But Stahl says that the Skylift will return to the local discourse in time, and he's been fine-tuning the project.

And yet that still is just one singular part of the story.

Here's where Stahl's work is really going to shine: Rock the Lake, a new waterfront unity organization that will guide residents and visitors to everything that Cleveland's lake and riverfront have to offer (recreation, dining, sightseeing: 64 "attractions" in all).

Once a month, Stahl would host a happy hour on his boat that brought together developers and leaders from Geis Cos., Cleveland Metroparks, Cumberland and elsewhere to talk about big ideas like this: the Skylift, Rock the Lake and beyond. In that way, Stahl and the group took the city's penchant for talking about the water to doing something about it. Each stakeholder ponied up $5,000 to form the Lakefront Collaborative. (The group's next project will loop in the sewer district to tackle water pollution issues.)

"Most cities that have a waterfront have a separate brand for their waterfront," Stahl says. "Riverlife Pittsburgh, Navy Pier, and you could go on. We just didn't have that individual brand for our water sites ... And we love the river, but our Great Lake is our asset."

The Lakefront Collaborative plans to give its work to Destination Cleveland, furthering the local network.

"There's an energy, having a lot of people moving downtown and living downtown," Stahl says. "When I hang out with my developer friends — the Geises and Paces — it's not only young, it's the older people who live in the suburbs and want a walkable lifestyle. It's an amazing time to be in Cleveland."