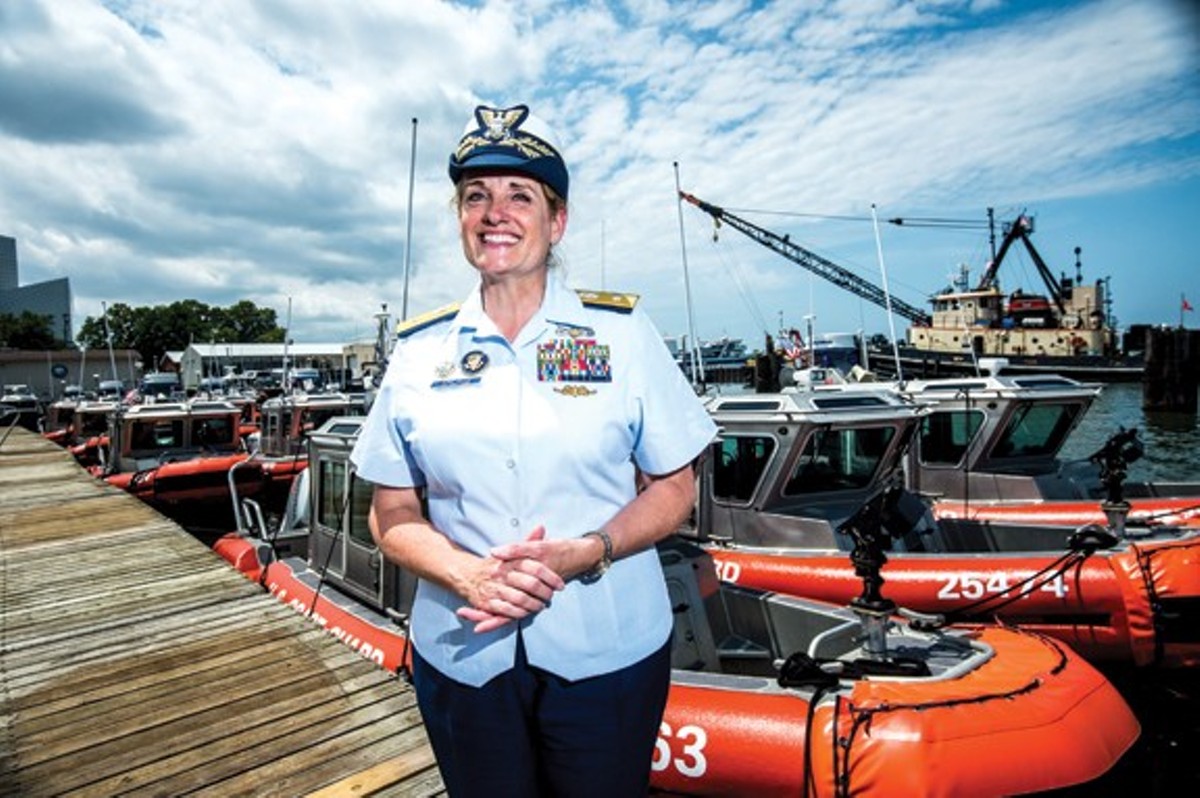 Rear Adm. June E. Ryan is the top dog in the U.S. Coast Guard's 9th District, an eight-state region that stretches from Massena, New York — right on the Canadian border — to Lake of the Woods, North Dakota, up past Duluth. Though there are several women in leadership positions in the Coast Guard, Ryan is the first woman to command the 9th District and the first woman to ascend from the enlisted ranks to flag officer.

At the City Club last month, when Ryan delivered the annual State of the Great Lakes address, she was asked whether or not any limit had been imposed upon her success because she was female.

"In my current position, no," Ryan responded. "Because I'm the admiral."

The crowd immediately applauded. And mic thus dropped, she elaborated.

On a recent sunny afternoon at Cleveland's Coast Guard station on East Ninth Street, across from the Rock Hall, Ryan tells Scene about her illustrious career with the Coast Guard. She enlisted in the Reserves in 1982, while she was a biology student at Bowling Green; she was a commanding officer on two boats (one of which, the cutter Neah Bay, was based in Cleveland); she was the military aid to President Bill Clinton for two years and, most recently, the military advisor to Jeh Johnson, the United States Secretary of Homeland Security. Now she's back in Cleveland.

"My family and I are big Food Network people," Ryan tells Scene, "and when I got my orders, we said, 'That's where Michael Symon is from!' So our first stop was Lola, and then we realized how many other great restaurants there were downtown; we very rarely go back to the same place."

Ryan lives in Lakewood with her husband and 14-year-old daughter and she says Cleveland has changed significantly since she was here 20 years ago, commanding the Neah Bay.

"Back then, Cleveland was a place where you worked and then left. That was it," she says. "Now, it's a legitimate nighttime destination. I've got staff who live downtown. I can go to Heinen's for lunch and people watch. It's a stark difference."

One of the big issues locally, in Ryan's world, has been the controversy over the dredging of the Cuyahoga River. Ryan rejects the idea that the Army Corps — which would like to dump dredged material in Lake Erie — are the villains, out to sabotage Northeast Ohio's water supply.

"We're responsible for looking after the environment and also for facilitating commerce," she says. "So it's our job to find common ground and find the safest way to do that."

On the safety front, Ryan says one of the biggest challenges right now is simply convincing paddle craft users to wear life jackets. She says that many people just don't recognize the hazards of being out on the water.

"If you were next to a train track, would you sit there and touch the train as it went by?" she asks. "People think it's fun to be out on a paddle craft and touch the sides of these big boats. But they could get sucked right in."

But safety is always front of mind for Ryan, especially as she and her staff prepared for the RNC. Ryan says she was impressed by the level of commitment and cooperation she saw in Cleveland — by community leaders, government officials, the nonprofits, the restaurants, the citizens.

"You hear 'whole of government' all the time, but this was really 'whole of community,'" she says. "Everyone, I think, wants people to come here and see Cleveland for the gem that it is."