The Best Things We Ate in Cleveland in 2017 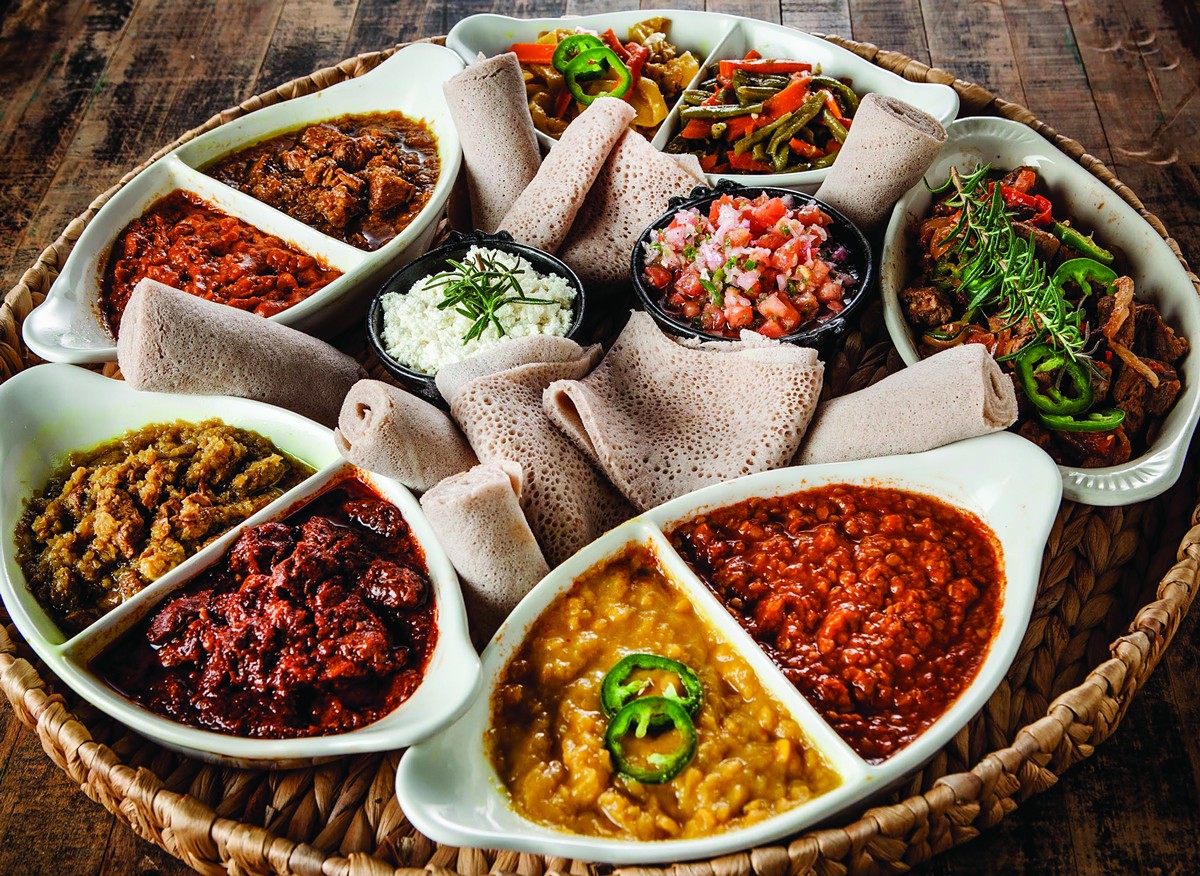 Unfortunately, every meal out is not going to be a homerun. But fortunately, it's the best ones that linger, lodged in the brain like a compulsion on a string tugging you back to the source. For me, these are the meals of 2017 that I hope to never forget.

Ribs and Brisket (Don't Make Me Choose) at Barabicu Smokehouse

I'm still thinking about the beef brisket and baby back ribs that I enjoyed a full 11 months ago at Barabicu Smokehouse in Parma. Barbecue should be rapturous (until the meat sweats kick in) and it should linger in the part of your brain reserved for glee long after it's gone. The jiggly, mouth-wateringly juicy brisket sits beneath a dark cap of spice and succulent fat. Those pig bones were meaty, firm and flavorful, kissed by fruitwood smoke and glazed with a thin, sweet crust.

Why is it they never believe us when we say "spicy"? Why must we beg — and, likely, still be ignored — when we request our dish to be electric with chile pepper? That's not the case at Thai Thai in Lakewood, where the standard-issue heat level for classically hot dishes is "Thai spicy." If you've enjoyed what passes for Holy Basil elsewhere, the version served here will ruin you. The habit-forming ground-meat dish is spicy, savory and tart, and the steamed rice it comes with is crowned with a runny fried egg, as is the custom.

No offense to Bold Food and Drink, which last year earned a spot on this very list thanks to their righteous octopi, but say hello to Astoria Market and Cafe in Detroit Shoreway. The version served here is as beautiful as it is delicious, with delectable coins of wine-braised, charcoal-grilled and sliced tentacles artfully arranged on a plate. Kissed by lemon, olive oil and fresh oregano, they almost are too pretty to eat.

I didn't expect the food at Zoma in Cleveland Heights to have such a positive lasting effect on my soul. In what world does a cuisine comprised largely of humble ingredients like lentils, chickpeas, cabbage and potatoes rise to such heights? Where else would a diner put up with eating food sans silverware from the same plate as their tablemates? Show me a place where the bread is spongy, cold and ever-so funky and I'll show you a place destined for failure. That is, unless it's an Ethiopian place called Zoma.

It's pretty much a truism that the longer the menu, the more duds there are bound to be. Zack Bruell restaurants almost always contradict that rule thanks to notoriously lengthy rosters filled with wildly delicious variety. Still, I never expected an aging Jewish hippie to deliver some of the best lamb tamales ever to cross my teeth. At Collision Bend Brewing in the Flats, zesty ground lamb is tucked inside perfectly steamed masa dough and garnished with lively salsa verde.

I doubt I'll ever achieve owner Shuxin Liu's recommended five-minute limit when it comes to consuming a bowl ramen, a time derived from the lifecycle of a bouncy noodle, but damn if I won't keep trying. Bowls of chicken and pork-based broth contain fresh noodles, silky slabs of buttery pork belly, corn, scallions, mushrooms and, if you're wise, a soft-cooked egg. If at first you don't succeed in the five-minute drill, try and try again at this Ohio City noodle bar.

Corndogs, long the greasy fair staple-on-a-stick, get such an upgrade at Noble Beast Brewing that they almost have nothing in common with the classic, apart from the skewer. For starters, the bland wiener is replaced by a meaty smoked kielbasa. And the typical sweet cornmeal batter undergoes a savory transformation thanks to the use of spent grains from the brewing process. Dunk that baby in the accompanying beer honey mustard and boom! goes the dynamite.

Hate to break it to you, but you're out of luck: La Casita, a Mexican grocer in Painesville, only operates its outdoor kitchen from spring through fall. That's when neighbors gather at plastic card tables beneath canvas tents to savor some of the best tacos in the tri-state area. Chorizo, tripe, tongue and al pastor are popped into warm homemade corn tortillas and garnished with roasted onions and blistered jalapeno peppers, along with your choice of salsas. Best $1.75 you'll ever spend.

I drove 40 miles for a $4 hamburger and it was one of the soundest decisions I made all year. For more than 85 blessed years, Bob's in Akron has been sizzling near-perfect smash burgers on the original coal-black griddle. They exit with a lacey, crisp edge, seasoned only by the ancient griddle and the grease left over from the morning ham and bacon. Mine lands in a toasted bun slathered with mayo and onion and it explodes with pure beefy flavor.

In the great debate between sweet and salty, I am firmly in the salty camp. Give me a plate of ripe, stinky cheese for dessert over some triple-layer death-by-chocolate belly bomb any damn day of the week. That's why when it comes to donuts, you can keep your chocolate pudding-filled, gummy worm-garnished confection, thanks, but kindly hand over that old-fashioned cake donut infused with rosemary and gilded with a bracing lemon glaze.

I've been a happy customer of Grey House Pies for more than a decade thanks to their weekly appearances at the North Union Farmer's Market at Shaker Square, where we'd grab a wonderful Quiche Lorraine or three for brunch. It was only after the owner opened up a shop around the corner on Larchmere that I fell in love with his Detroit-style pizza. This might look like standard-issue sheet pan pizza, but it's not: This is the real deal, with burnt-cheese edges surrounding lighter-than-air dough beneath an inverted cheese/sauce cap.

Wherever they happen to appear — on a pizza, in a hoagie bun, atop a mound of pasta — meatballs tend to be one-dimensional, and that dimension is boring. By using well marbleized belly meat from flavorful lamb, the kitchen at Hook & Hoof in Willoughby already is two dimensions ahead of the curve. The dreamily textured balls are boosted still, by a zingy arrabiata sauce and layer of fragrant melted Taleggio.

In the heart of Glenville, surrounded by Popeye's, McDonald's, Rally's and a half-dozen Chinese takeaways, sits a culinary oasis in the form of freshly grilled — not deep-fried — chicken. Just $10 nets a flavorful half a bird, four warm corn tortillas, a bed of rice and beans, and two sauces of your choosing from a list that includes zesty curry, cilantro lime and a spicy hot that truly is spicy hot.