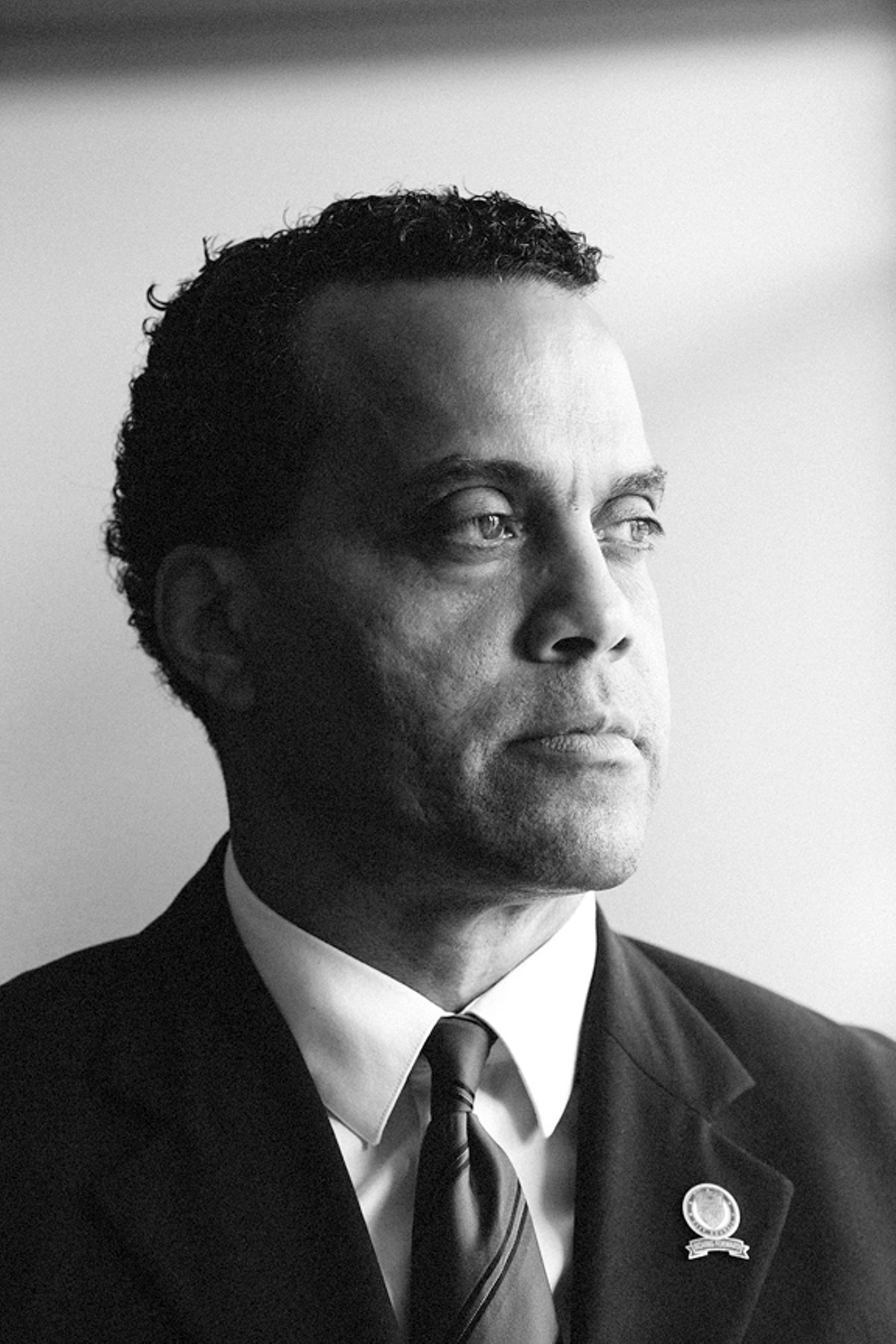 "We expect our politicians to be thoughtful, levelheaded, calm under pressure, all that," says Jeff Johnson, seated in his ward office in Glenville, twirling a Huntington Bank pen as he talks. "But we also expect them to have feelings."

Johnson is speaking on the subject of his Cleveland City Council reputation: as a challenger, a hothead, a guy who doesn't stop fighting even after he's lost.

"Mrs. Jones in my ward," he says, referencing his favorite theoretical constituent who often appears in his council-meeting remarks, "she doesn't have access to the bully pulpit of City Hall. So if she's angry, it's my job to express that anger."

Johnson seems like he's been angry all year. Ever since former council president Martin Sweeney conspired to remap Cleveland's wards in 2013 in an effort to unseat Mike Polensek (impossible) or Johnson, the eastside politician has seemed to have a chip on his shoulder, and some would say he can't be blamed.

Johnson prevailed over Eugene Miller, the profanity-prone Sweeney sycophant (and recent City Hall hire), and now governs the long, thin Ward 10, which spans St. Clair-Superior, Glenville, Collinwood, Euclid Park, and Nottingham Village. In what was something of an unprecedented alliance, Johnson teamed up with Councilmen Kevin Conwell and Polensek to form a Northeast Bloc. Together, they've been singing the song of inequitable resource allocation. They feel that the city's northeast section is being neglected in favor of downtown and destination neighborhoods.

Johnson was also frustrated by council's lack of preparation for the Department of Justice consent decree with the city.

"We put ourselves in the hole by not preparing for it," says Johnson, who urged his colleagues to set aside a pool of funds during budget discussions.

He sees the challenges of implementation as a three-headed beast: 1) The ability to fund everything, obviously. 2) Expecting current leadership — the leadership that oversaw the systemic failures in the police department — to see change through. "It's problematic and it's short-sighted," he says. And 3) The power of the union, which will no doubt nibble away at the goals and spirit of the consent decree and blunt its impact.

For now, though, Johnson is excited to be planning the 37th annual Glenville Community Festival and the upcoming development projects in his ward: the St. Clair Corridor and a new grocery store at the East Side Market location on St. Clair and East 105.

But the big question with Jeff Johnson is whether or not he'll run for mayor in 2017. The press has speculated that he'd be a frontrunner ever since Frank Jackson was elected for his third (and presumably final) term in 2013. Some of Johnson's colleagues have even suggested out of the corners of their mouths that Johnson's inflammatory rhetoric in council is a conscious tactic to publicize his platform.

"I'm considering it," Johnson says, of a mayoral campaign. "If I announce, it would be after the presidential election in 2016, but I won't be coy. I'm definitely looking at it: figuring out costs, figuring out strategies."

One of which will likely be differentiating himself from the measured, and some might say boilerplate, leadership of Frank Jackson. Johnson says he has agreed with Jackson on a number of issues — he thought he handled the consent decree negotiations well, if less so in the media — but maintains that the mayor needs to speak up for the city and its frustrated residents.

"He was too quiet on Tamir Rice," Johnson says. "I've got a different style."

Sam Allard is the Senior Writer at Scene, in which capacity he covers politics and power and writes about movies when time permits. He's a graduate of the Medill School of Journalism at Northwestern University and the NEOMFA at Cleveland State. Prior to joining Scene, he was encamped in Sarajevo, Bosnia, on an...
Scroll to read more Cleveland People articles