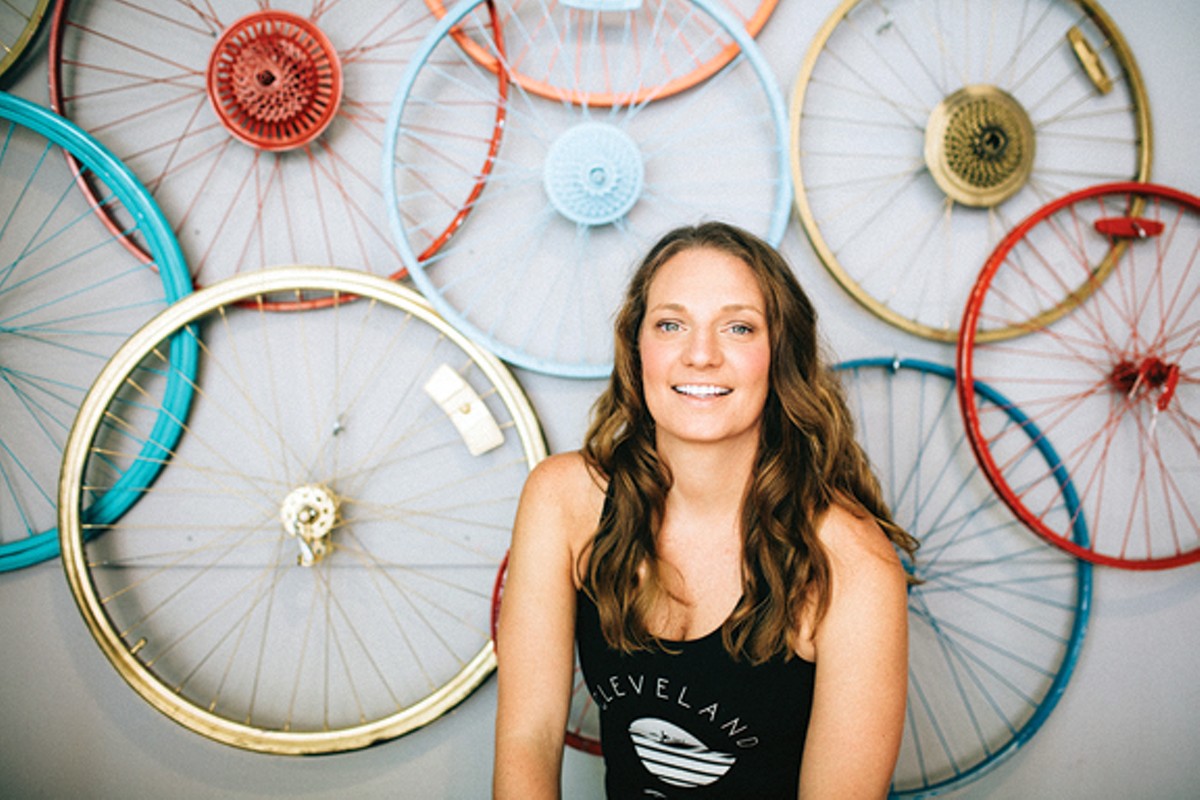 "Nowadays, there's a boutique fitness studio next to every Starbucks in Manhattan," says Anne Hartnett. "But a few years ago it was still very new."

Spinning was certainly a foreign concept to a lot of Clevelanders. Until Hartnett took the entrepreneurial splash with her spin shop in Ohio City, she'd been a consultant for Hyland Software. She was working a long-term project in NYC and fell in love with spinning as it was taking off there and all over the East Coast.

Back in Ohio, after she graduated from Bad Girl Ventures, an organization that invests in women by helping them create and optimize startup business plans, she found the space on the corner of Detroit and West 29th Street (now known as Hingetown) and knew instantly that she'd found the home for her concept.

"After my husband and I had rehabbed our home in Ohio City, I knew that we could do it here," Hartnett says from the basement of Harness as the beat of a class in progress pumps through the ceiling.

Hartnett, who's 31, recently moved out to Rocky River with her husband and young son. They're expecting another child later this year. But even though her house is now in the suburbs, she feels deeply a part of the community she helped create and lived in since 2010.  In fact, she argues that the mission of Harness is much more than just trendy exercise.

"Our mission is to build community through movement," Hartnett says, "and even more than that, to kind of activate a culture that traditionally doesn't exist in Cleveland, which is that people get out of work and then go move instead of the alternatives. We have so many phenomenal natural resources in the city, and with all the young people coming back, I think there needs to be places like Harness facilitating opportunities to make those things happen."

Case in point: a weekly bridge run culminating in the Ohio City Stages concert space in Harness' front yard. Events like that — "sort of our poster child," Hartnett says of the weekly run — bring people together.

Hartnett is also an instructor at her studio and she concedes that her playlist isn't exactly traditional.

"I don't do a lot of the electronic dance music," she says, gesturing to the music above. "With me, you'll get a lot of Mumford & Sons, classic Bruce, Coldplay. I'll definitely do remixes, but I'm a big fan of alternative rock."

She'll continue rocking (and attracting new business) with the attitude that working out should be fun.

"At Harness it's as much about being social and active as it is about getting exercise," she says.