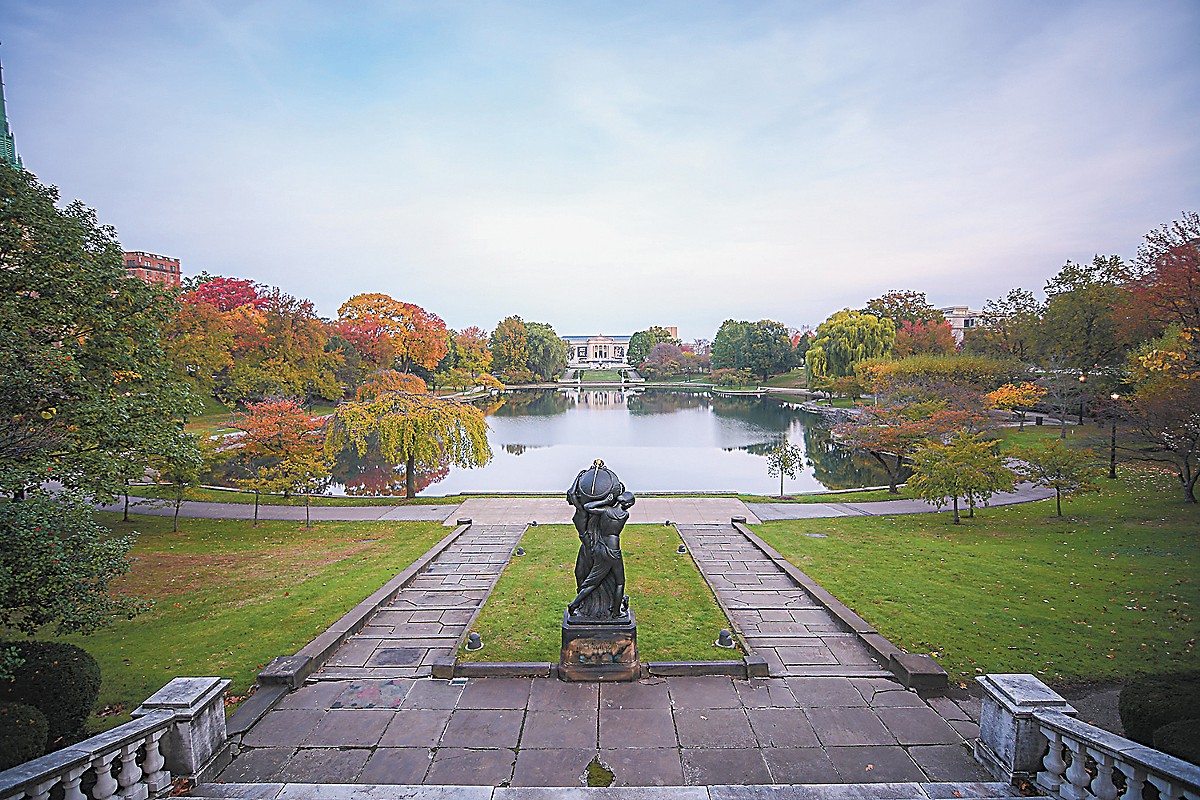 You may never guess from the name that University Circle isn't just where co-eds from Case Western Reserve University hang out. It's the de facto cultural hub of Cleveland, boasting the city's finest museums, cultural institutions, performing arts centers, cafes and restaurants, most within walking distance of one another. University Circle serves as a year-round nexus for Cleveland's arts and culture scene, welcoming more than 3 million visitors each year.

The Cleveland Museum of Art is one of the many remarkable cultural treasures in University Circle. It houses nearly 45,000 works spanning from 3,000 B.C.E. to the present. In the age of the selfie, the south galleries' Armor Court is especially popular with tourists cheesing it up among the hollow plate and mail. The lofty atrium, conceived by Uruguayan architect Rafael Viñoly, hosts monthly mixers with live music, airy atmosphere and — of course — booze. The museum's performing arts series showcases a range of artists in Gartner Auditorium and in the galleries themselves. Provenance Cafe contradicts the old saying about art in restaurants and food in museums. As one of the world's top museums with free admission, it's no wonder CMA is one of the most-visited, with more than 700,000 guests each year.

Severance Hall is synonymous with the Cleveland Orchestra, which has called it home since 1931. John L. Severance built the hall in memory of his wife, Elizabeth, whose personality and taste infuse the design by local architects Walter & Weeks. The building's classic exterior complements the rest of University Circle's cultural institutions. The interior is an explosion of art deco, classicism, Greek and Egyptian revival. The Cleveland Orchestra performs most of its regular season concerts in the main hall. The more intimate Reinberger Chamber Hall, just off the main lobby, is used for educational programs and chamber concerts. If orchestral music isn't your style, you can still admire Severance's eclectic architecture on a free public tour. Call the ticket office to reserve a spot.

For those who prefer to pair French-quality baked goods with a smoky Bordeaux, Coquette Patisserie is the place to be. The variety of macarons alone rivals that of any French bake shop, with everything from amaretto and praline to cantaloupe-paprika and spicy Mexican chocolate. Coquette augments a selection of classics like brioche, St. Honores, eclairs, triomphes and tarts with seasonal specials. Chef Britt-Marie Culey, who has more than a decade of experience in the culinary industry, runs the show with verve and taste.

L'Albatros Brasserie + Bar, the tucked-away upscale restaurant on Bellflower Road, is chef Zach Bruell's take on classic French cuisine. Once you've gotten the name down (the s is not silent, American Francophones), you can take in the expansive menu featuring a selection of French staples, some of which come with an American twist. L'Albatros clearly puts quality and customer service over empty purism. Portions are generous by French standards. Servers are knowledgeable and able to clarify menu items in case you don't quite remember what confit is. There are also gourmet pizzas that play on traditional French ingredients, as well as vegetarian options. If your French is less than serviceable, the prices help distinguish between main plates and appetizers. Just don't try asking about les à côtés at a typical French place; the waiter may not always infer you're actually after an accompagnement.

Let's start with the building itself: a $27 million black, prism-like block covered in more than 1,300 Rimex steel panels that, on certain rare days, cast that iconic Cleveland sunlight onto the street, blinding pedestrians and motorists alike (not exactly ideal when you're about to go look at art). But Cleveland's Museum of Contemporary Art's bold new home is the first U.S. building — and the first museum — designed by Iranian-born British architect Farshid Moussavi. MOCA is one of a handful of museums that has no permanent collection. So while other museums promise something new with each visit, MOCA actually means it. The museum's 6,000-square-foot top level functions as a versatile exhibition space and offers a view of the outdoor plaza below. This fall, look for a collection of murals and a documentary inspired by the Great Lakes, created by ecologically-minded artist Alexis Rockman. Starting in October, MOCA will host the first U.S. solo exhibition of Yugoslavian multimedia artist Aleksandra Domanovi.

From its modest 19th-century beginnings on Public Square, the Cleveland Museum of Natural History has grown into one of the finest natural history museums in the nation. CMNH is home to a staggering five million specimens and artifacts, numerous exhibits, and devoted researchers whose work goes far beyond just dinosaurs. The museum's collections span a variety of natural disciplines including archaeology, botany, ornithology and climate science. The museum's library contains upwards of 60,000 books and periodicals available for on-site perusal by appointment. The museum also oversees and preserves thousands of acres of land, including the 1.3-acre Singer Lake Bog near Green, soon to be the home of an 8-mile section of the controversial NEXUS pipeline. CMNH recently hosted the traveling exhibit, "The Bearded Lady Project," which celebrates female contributions to the natural sciences.

The nationally-acclaimed, nonprofit Cleveland Cinematheque offers screenings of alternative, independent, classic and foreign films nearly every week of the year. Film buffs can take in 16-mm and 35-mm films on a fairly regular basis, though most films are now shown in digital formats. The 300-seat theater resides in the relatively new George Gund Building in Uptown. It's part of the Cleveland Institute of Art's new $75 million campus, which turns 3 years old this year. You can't miss it: Just look for the LED "media mesh" jumbotron as you drive east on Euclid Avenue.

Karamu, a professional theater company named after the Swahili word for "a place of joyful meeting," focuses on productions that illuminate the African-American experience. Founded by two white social workers, Karamu began experimenting with interracial casts in the early 20th century. Karamu claims the great poet Langston Hughes as one of its most illustrious alums. Karamu was part of an artistic settlement in the early 1900s that included an early childhood development center and a center for arts education. Today Karamu holds rigorous programming in dance, vocal music, and drama for children, youth and adults..

With its 10 acres of outdoor gardens and 18,000-square-foot greenhouse, the Cleveland Botanical Garden is a year-round escape from urban surroundings. Roughly 150,000 guests visit the botanical garden each year. The Eleanor Armstrong Smith Glasshouse focuses on plants and insects from Madagascar's desert as well as Costa Rica's tropical rainforest. The garden's art gallery features nature-inspired works by local artists. The botanical garden is open Tuesday through Sunday; check online for hours.

It's rare to find exceptional coffee and pastries under the same roof in Cleveland. Fluffy Duck Cafe is one of University Circle's newest cafes that manages to offer both. Marble surfaces, non-gender bathroom facilities and a bright color palette make for an inclusive and inviting atmosphere. Head baker Ben Woods, who trained at the Culinary Institute of America, opened the 2,500-square-foot cafe with a gleaming kitchen as its centerpiece. Flaky puff pastry products steal the show in the cafe's long, glass display case. Barista Emily Cain runs the coffee side of things, offering classic beverages such as brewed coffee, lattes, cappuccinos and espresso.

There's something about cemeteries called Lake View and famous people: Think of the Lake View cemetery in Jamestown, New York, where Lucille Ball was eventually moved after a few years in Hollywood. Our own Lake View is the resting place of such 20th century figures as oil magnate John D. Rockefeller, the untouchable Eliot Ness, Cleveland Orchestra founder Adella Prentiss Hughes, President James A. Garfield, and Abe Lincoln's former aide and U.S. Secretary of State John Hay. Lake View's lush grounds are speckled with gravestones and monuments honoring more than 100,000 deceased. The Jeptha Wade Memorial Chapel features an interior designed by stained-glass legend Louis Comfort Tiffany. Docent-led walking tours are available for groups of 12 or more, with a registration fee of $5 per adult.