You Made It Through the Night. So What Do You Eat and Drink Now? 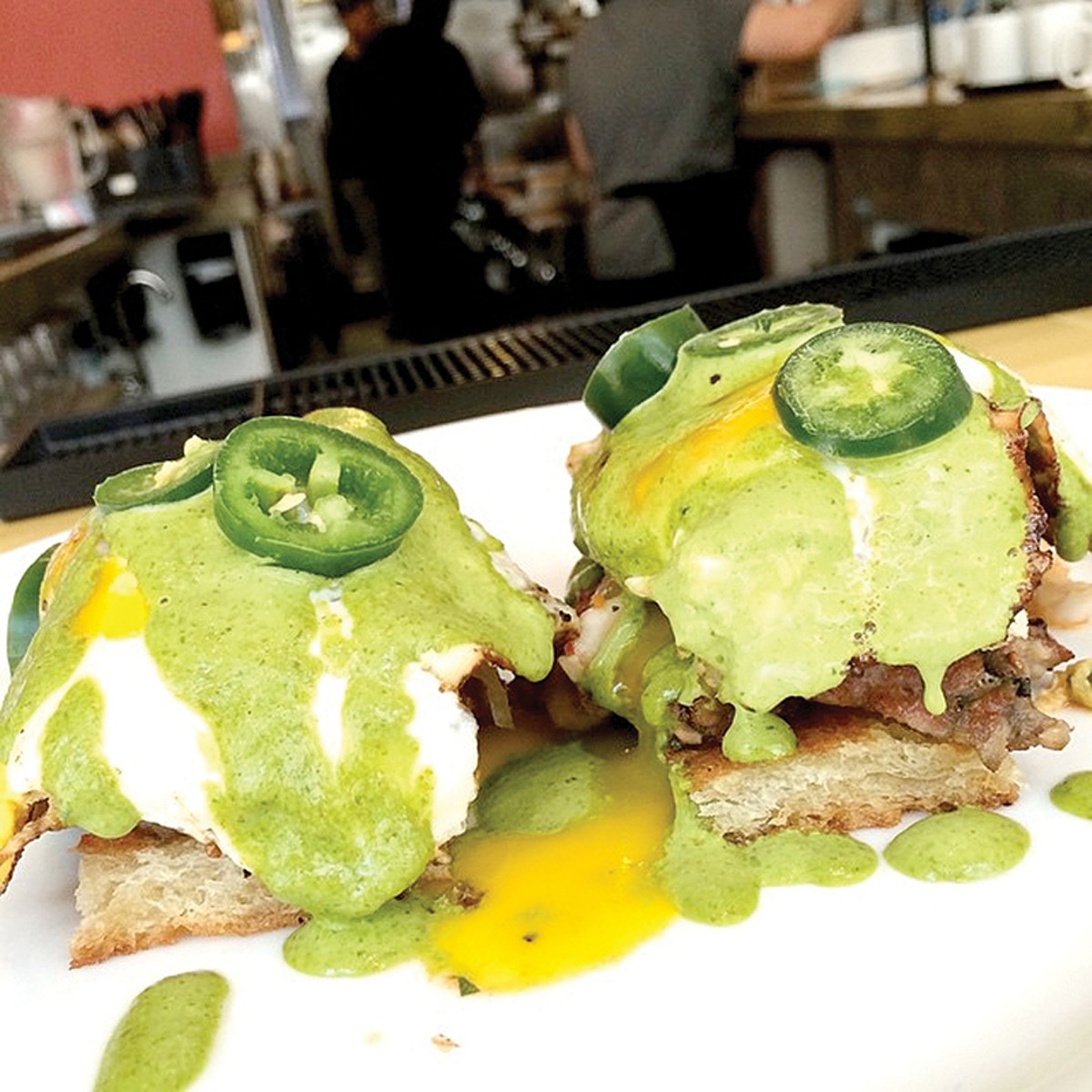 The evening was so much fun you don't want it to end. Or, the evening was too much fun and you know now you should have ended it sooner, but we're way past doing anything much about that other than seeking out some food to make the bad, bad feelings go away. Maybe a drink too. Yeah, a drink wouldn't hurt.

As much as we love all the action that happens once the sun goes down, we also love the grub dished up after the rooster crows (or whatever the hell that godforsaken noise was that stirred you awake. Can they really be doing construction that early? Is it legal? Where did my neighbor even get a vuvezela? Did they really hold onto it since the last World Cup? I didn't even know they liked soccer.)

Here, in no particular order, are some of our favorite places to nurse a hangover or, for the super ambitious, get the day started without the need to immediately take a nap afterward.

Build-your-own crepes, sweet potato pancakes, and eggs Benedict are a few of items we love at this Ohio City destination. They also have a wide selection of on-tap brews and a.m appropriate cocktails because, obviously, it's about more than just good food. Brunch here begins at 9 a.m. on Saturday and Sunday, and if you or your pal is into vegetarian stuff, you won't find a better menu.

This little French-inspired spot is an Ohio City favorite, if not entirely different from Townhall. With your sweet or savory crepe make sure to also order a glass of champagne, red or white wine, or a Great Lakes brew. Unlike most Cleveland spots, brunch here is every day, starting at 10 a.m., which means that if you made Tuesday a Saturday, your Wednesday can still be a Sunday.

A little secret you might not know but should: The West Side Market Café has beer and it's open super early, a key fact that comes in handy when you're sitting bleary eyed in bed and most restaurants serving brunch don't open until 10 or later. Otherwise, the menu is filled with simple and cheap diner favorites like eggs and potatoes, and who are we kidding: Any of it pairs well with a beer.

Prosperity joined the brunch game late, compared to most other Tremont joints, but its Saturday and Sunday brunch (10:30 a.m. to 3:30 p.m.) is filled with on-point standards as well as some curveballs like toasted coconut pancakes. The cocktail menu is as long as the food menu, which should keep you busy until lunch.

Before Saturday brunch was a thing, Fat Cats was doing it and no one except locals really seemed to care. That's all changed, of course, as brunch expands to just about every corner of the world. But Fat Cats is still doing it right, especially because this low-key Tremont hangout offers brunch on Saturdays from 11 a.m. to 4 p.m. for everyone who likes a bit more sleep after a late Friday night. Mimosas taste great with almost anything, especially potato pancakes, salads, sandwiches, tacos, omelets and more. They also have a full bar to whip up anything you like.

If the thought of picking out an actual outfit physically hurts your brain, the Beachland Ballroom is for you. Along with chunky sweaters and flannel shirts, the most fashion-forward article of clothing one's likely to spot here is a Members Only jacket, circa 1983. The expansive brunch menu might be the most indulgent around, offering to make almost any dish vegan, vegetarian or gluten-free. To make the smoky biscuits and gravy vegetarian, for example, simply swap the sausage gravy for one made with mushrooms. A panko crust on the fried chicken manages to lighten up chicken and waffles.

Dear Westsiders: make this spot your next brunch location on Sundays from 10 a.m. to 1 p.m. Chow down on some chicken and waffles, burgers or their breakfast platter in the quaint and cozy confines that also boast one helluva tap list. Mimosas and Bloody Marys are par for the course as well.

This cozy little cafe offers simple all-day breakfasts, a roundup of lunchtime sandwiches, and bounteous weekend brunches, including several options just right for the meat-free crowd. Sure, it's packed on the weekends — that's partially due to plenty of love from the Food Network — but also because of owner Heather Haviland's creations like the Shipwreck, which is exactly what it sounds like and is basically a superhero come to rescue you from hunger and hangovers. Don't overlook the well-stocked pastry counter, filled with imaginative muffins, scintillating scones and brightly frosted cupcakes, among other sweet delights.

Ever see something on your Instagram feed so drool-worthy that it stops your finger mid-flick? Assuming you follow a lot of food-obsessed Clevelanders, that thing probably is a tall stack of pancakes or other breakfast-built caloric tanks from Jack Flaps, which come in both sweet (candied jalapenos with white chocolate sauce, for instance) and savory (chipped beef on challah) varieties. Yep, blame those fluffy flapjacks for your envious Sunday-morning stomach rumble. With a new(ish) outpost in the 5th Street Arcades, in addition to the Ohio City flagship, and with breakfast served every day of the week, Jack Flaps is your savior in times of need.

If you miss Mom's cooking, this is the place to get your fix. Big Al's in Larchmere has all the comforting favorites, like thick, steaming soups, housemade mashed potatoes with gravy, open-faced roast beef sandwiches and chocolate cake for dessert. Breakfast is served until the diner's late-afternoon closing time and if you go there and don't order Big Al's famous corned beef hash, you're doing yourself a huge disservice.

This wee and tidy space in the Cedar-Fairmount district is as crisp and cosmopolitan as a bespoke suit. More bakery than cafe, the shop specializes in sweets of every size, color and seductiveness. Rounding out the menu are made-to-order panini and French crepes, both sweet and savory.