Photo Via Wikimedia Creative Commons
If you go to see classic rockers Foreigner play a concert these days, chances are you’ll see a line-up that only has one or two original members. Sure, the band still plays all the hits — songs such as “Jukebox Hero,” “Cold as Ice” and “Feels like the First Time.” But if guitarist Mick Jones is the only original member, is it really an authentic experience? Head Games, a Foreigner tribute band out of New York, might just be better than the real thing. The band headlines Rockin’ on the River tonight. Almost Famous opens at 5. Admission is free. (Niesel) 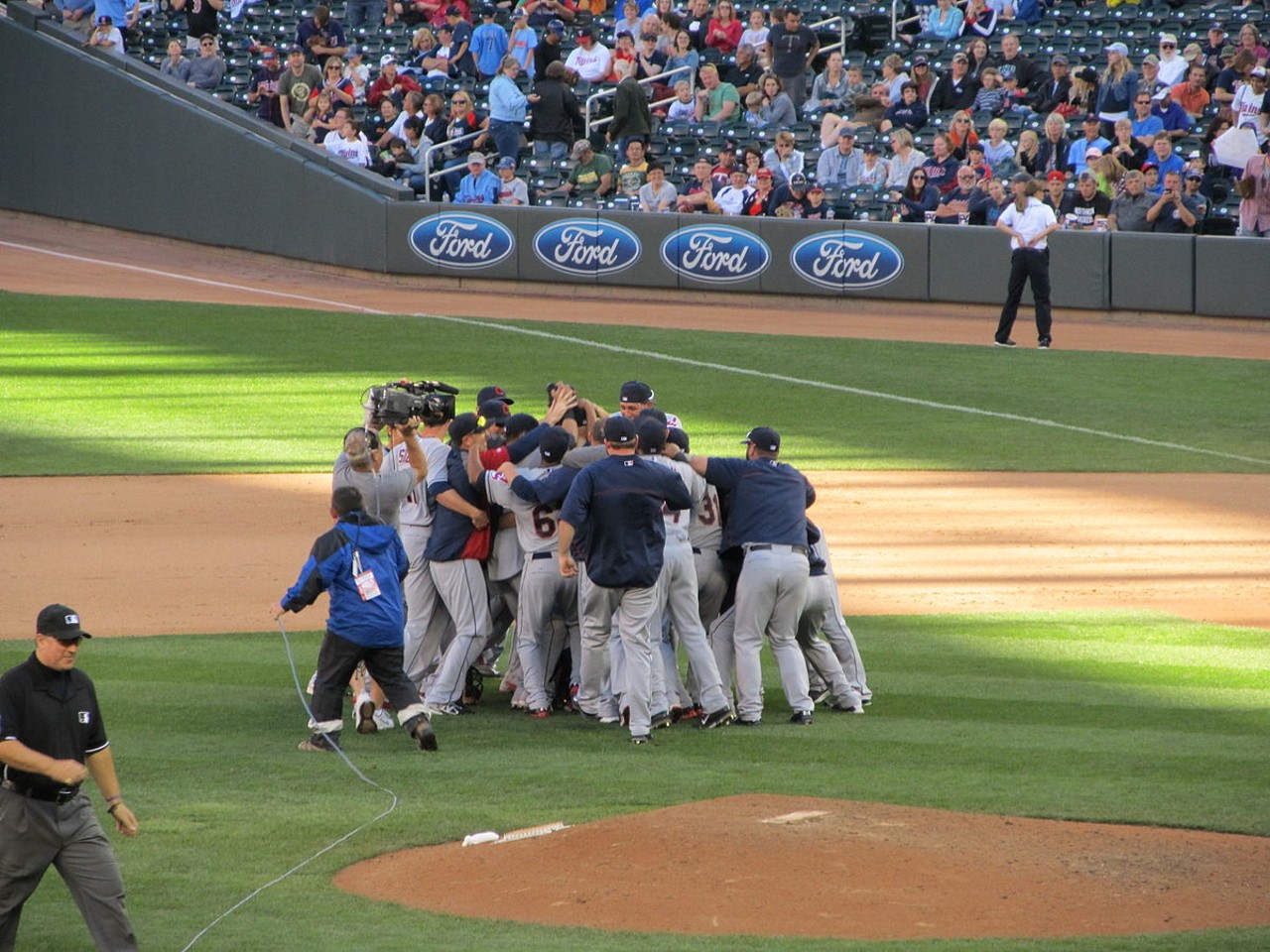 Photo Via Wikimedia Creative Commons
Bit of a snag there, for the Indians, with the consecutive losses to Kansas City on the road, but no matter. They’re playing playoff-level baseball of late (with a few question marks in the starting rotation). Good news is, the AL Central has become an incredibly tight race. Detroit was presumed to basically run away with the division in its sleep, but Cleveland, Chicago, Kansas City, and even Minnesota (thanks to the likes of Brian Dozier and ace Phil Hughes) are finding ways to keep things competitive. Tonight the Tribe takes on the Tigers, the division leaders. Former Indian Victor Martinez is leading that ballclub in batting average in home runs and has become an emotional ballast during Justin Verlander’s slumpy start. The Tribe will look to continue riding the hot bats of Michael Brantley and Lonnie Chisenhall this weekend. Game tonight at 7:05, tomorrow at (weirdly) 7:15, and Sunday at 1:05 p.m. Tickets start at $14. (Sam Allard)

Photo Via Flickr Creative Commons
Billed as “the World’s Premier Nighttime 5K run/walk experience,” Electric Run is a 5K road race in which the participants are an integrated part of the show. The press release, which claims the event features “immersive ‘Lands’ of light and sound that transport the participant into an electric wonderland [that] promises to transport the mind, body and soul to a new world in a healthy and drug-free way,” makes it sound more like a rave than a race. Organizers encourage patrons to bring their own glow sticks and LEDs. The race starts at 9:15 p.m. at the Cuyahoga County Fairgrounds. Registration is $64. (Niesel)

Photo Via Flickr Creative Commons
An accumulation of 30 artists playing on 30 different porches (although, usually, not simultaneously), Larchmere Avenue's Porchfest creates a unique musical experience for those who want to get up close and personal with their music. Spend a Saturday listening to local bands and soaking up the sun in one of Cleveland's historical neighborhoods.

Photo Via Flickr Creative Commons
It seems like there’s a day celebrating every sort of activity. Today, for example, is Go Skateboarding Day. To get in the spirit, Coventry Village and Public Square Group, a Cleveland nonprofit “dedicated to skateboarding, art and civics,” have teamed up to transform Parking Lot 15 (located between Heights Cleaners and Marc’s on Coventry Road) into a one-day pop-up skate park complete with ramps and obstacles. The event takes place from 3 to 7 p.m. and admission is free. After the pop-up park closes, B-Side Liquor Lounge & Arcade hosts an all-ages party that will include classic skateboarding videos, arcade and pinball games. There will be special discounts on food and drinks too. The event concludes with a free outdoor showing of the popular skateboarding documentary The Bones Brigade, An Autobiography in Coventry P.E.A.C.E. Park (at Euclid Heights Boulevard and Coventry Road) at 9 p.m. (Niesel)

Photo Via Wikimedia Creative Commons
“We are an Ohio band, and pretty much anywhere within the borders of our state we like to call home. And especially Northeast Ohio,” Red Wanting Blue frontman Scott Terry told Scene earlier this year. The band was driving into Cleveland for a two-night stand at the House of Blues. It’s a testament to Terry’s statement there that they’re returning to the area so soon. From the Vanishing Point remains the band’s seminal album (check out “Audition” and “My Name is Death,” in particular), but they’ve got a new disc on the way, titled Little America. Look out for a handful of tunes from that one during tonight’s show. It’s a sure bet that RWB’s set — new and old tunes alike — will contain that very personal vibe from which all of their great tunes have grown. “When it comes from an honest place, when it comes from some sincere place, there’s something about that that transfers over. And you hope that it transfers into the song and into the words and that people can ‘get it,’” Terry said. (Sandy) $15

Photo Via Flickr Creative Commons
One of the summer’s biggest parties, the annual Summer Solstice event at the Cleveland Museum of Art provides a great way to discover bands that wouldn’t normally play Northeast Ohio. This year’s eclectic line-up features guys like Mercan Dede, a dude who’s known for playing a plastic water pipe he fashioned into a rey, and DJ Akrin Allen, a producer who’s released more than 120 singles during a 30-year career. You can also walk through the museum’s galleries and get a sneak peak at the new exhibit Yoga: The Art of Transformation. Tickets are sold out but the museum has sometimes released extra tickets on the day of the event. (Niesel)

Photo via Facebook
Bring out your bright T-shirts and white blazers; there’s a Miami Vice-themed fashion show today at Shooters in the Flats. Put on by fashion boutique Tre Sorelle of Little Italy, there will be a cigar event from 3 to 7 p.m. while the fashion show itself starts at 9 p.m. A portion of the proceeds goes to benefit the Cleveland Heart Walk. VIP tickets cost $60 in advance ($65 at the door) and get you a bunch of goodies including four cigars and some booze, while the $10 general admission gets you in the door to watch the runway event. Guests are highly encouraged to embrace the mood of the night and don their ’80s Miami best. (Trenholme)

Photo Via
Pull that little wooden car off the shelf and come out to the Spaces Artwood Derby 2014 in celebration of the gallery’s 36th birthday. Whether you’re an artist or not, you can create a car to enter in the derby for $8 (which also gets you a drink from the bar), or enter an older model in the Old Skool race for $3. There will be prizes awarded in several categories, and you can pick up your pinewood kit at the gallery. Check the Spaces website for all of the rules and details. The races run today from 5 to 7 p.m., and admission is free. (Gonzalez)