10 Things Going on this Weekend in Cleveland (January 9 -11) 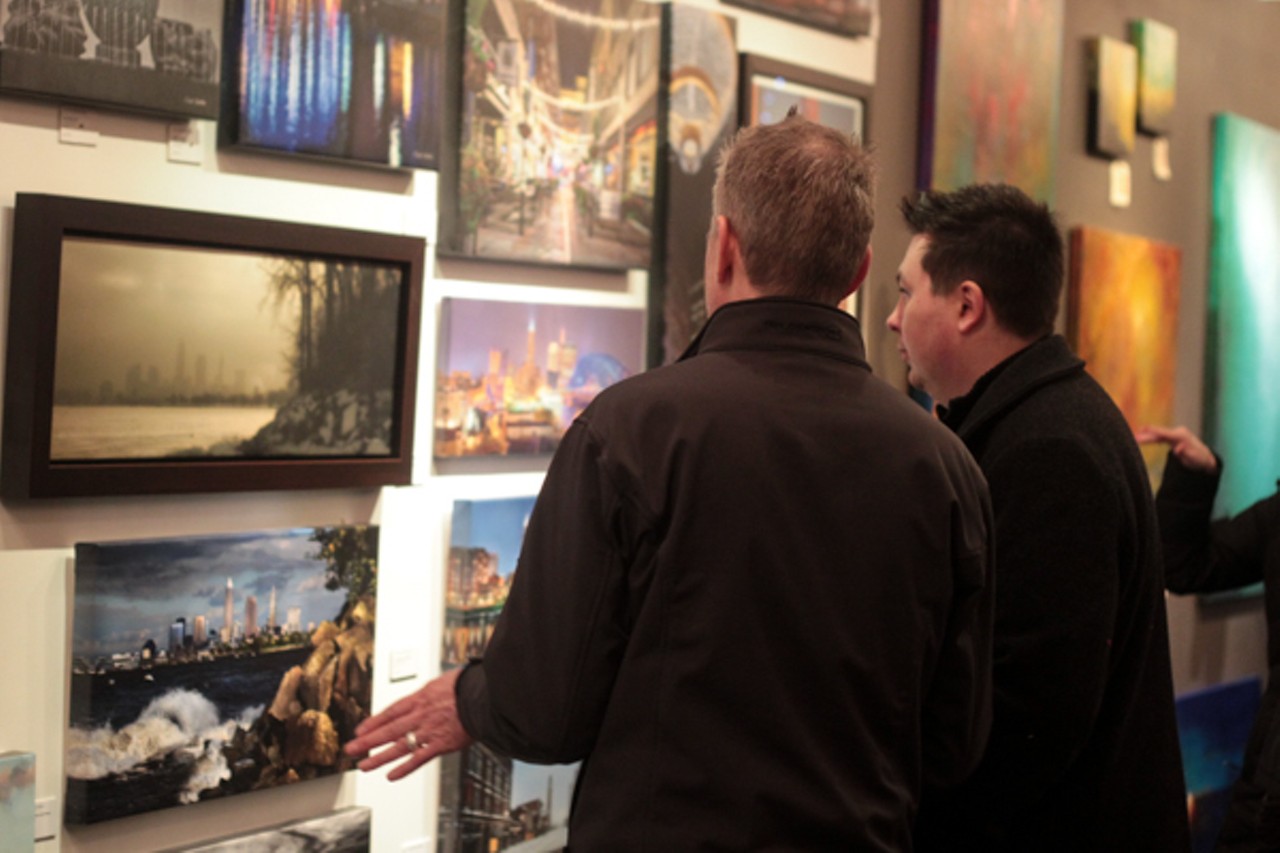 Photo via Ashley Taylor
It’s the second Friday of 2015, and that means it’s time for the year’s inaugural Tremont Art Walk. Stop by LOOP starting at 6 p.m. to see paintings by Cleveland native Dan Corrigan, a graduate of Cleveland State University’s art department. The show spans many different series created over the past seven years. There’s plenty more to see, too, like the Pretentious Tremont Artists of the Literary Café, where you can catch local artists drawing live models every Friday evening, beginning at 9 p.m. Wander around the whole neighborhood to see everything. (Josh Usmani)

Photo via Facebook, Shaun Jones
Wild-eyed comedian Shaun Jones likes to gesticulate madly when performing. So a visit to a third-rate strip club, where he says even the strippers’ fingers had stretch marks, gives him a chance to really go nuts. During his routine, he claims even Ray Charles would have walked out of the place and he turns the microphone stand into a walking cane to show just how that might have appeared. Jones brings his animated act to Club Velvet at the Hard Rock Rocksino where he performs tonight at 7:30. Tickets start at $13 and shows continue through Sunday. (Niesel)

Photo via Facebook, Michael Sonata
Canton native Michael Sonata has always been involved in plays and choirs and was a member of the University of Notre Dame Glee Club. In 2004, he auditioned for a role in a Sopranos spoof that required a character based on Frank Sinatra. Sonata got the part and has been imitating Ol’ Blue Eyes ever since. He includes some 90 songs in his repertoire and covers all eras, including the Columbia years and the Capitol years. He even takes requests from the audience. He performs tonight at 8 at Music Box Supper Club. Tickets are $7. The event is preceded by an Ol’ Blue Eyes Whiskey Dinner that pairs Jack Daniel’s whiskey with stuffed artichokes and chicken Milanese. Those tickets are $50. (Niesel)

Photo via Dirty Snowflake Prediction Run, Facebook
The first to the finish line doesn’t win today’s Dirty Snowflake Prediction Run. The key to winning the race is to know how long it’ll take you to finish the 4-mile loop out at the Cuyahoga Valley National Park’s Ledges Shelter in Peninsula. You’re not allowed to bring a watch or GPS so leave them at home. Registration costs $30 in advance, $35 on the day of the race. The run starts at 10 a.m. (Niesel)

Photo via IMBD
“Pre-Code Hollywood” refers to those Hollywood movies made prior to the passing of censorship regulations that ensured that movies would adhere to moral guidelines. Dr. William Patrick “Pat” Day, a professor of English and cinema studies at Oberlin College and an expert on 1930s Hollywood, will explain the restrictions prior to the screening of She Done Him Wrong, a “double entendre-laden comedy” that’s set during the Gay ’90s and based on Mae West’s hit Broadway show Diamond Lil. West stars in the film as a bawdy saloon singer who meets the straight-laced director of the city mission next door (Cary Grant). A 35mm print from the Universal Pictures studio archive, the film screens tonight at 5 at the Cleveland Institute of Art Cinematheque. It screens again tomorrow a 6 p.m. Tickets are $9. (Niesel)

Photo via IMBD
In 1965, a series of events changed the modern concept of civil rights forever - as marchers, led by Dr. Martin Luther King Jr., attempted to carry out a peaceful procession from Selma to Montgomery on a quest for the human right to vote. The confrontations, the final march and the passage of the 1965 Voting Rights Act are now a part of history. But the vitally human story of Selma – from the political battles to the faith of people on the street to the private struggles Dr. King faced – has never been seen on the screen. Screenings take place all day at Valley View Cinemark. Call (216)447-7900 for show times and ticket info.

Photo via Wikimedia Commons
Most famous for his 1959 hit “The Twist,” singer Chubby Checker was recently in Cleveland for a couple days to promote tonight’s show at the Hard Rock Rocksino. (He also made a run out to Mentor where Chubby Snacks Beefy Jerky is produced.) Dubbed Rock and Roll to the Rescue, the show is a benefit concert designed to raise money for the Geauga County Humane Society’s Rescue Village. A groundbreaking musician who introduced dancing to the rock world, Checker broke down barriers. “All I knew is that everyone was dancing,” says Checker, who was in 11th grade when he started imitating artists such as Elvis Presley and the Everly Brothers. “We brought that to the dance floor and people weren’t even interested in what was going on socially. They just wanted to go out and have fun.” The show begins at 8 p.m. and tickets start at $25. (Niesel) Photo via Rexness, Flickr Creative Commons
Planning a wedding is no easy task. That’s why the annual Landerhaven Bride event that takes place today from 11 a.m. to 2 p.m. at Executive Caterers at Landerhaven is such a big deal. New York-based designer Austin Scarlett will be on hand along with more than 50 wedding industry professionals. Tickets are only $10. (Niesel)

Photo via Ashley Taylor
Thanks, in part, to reality TV, dancing is as popular today as it’s ever been. Dance enthusiasts will want to sign up for Dance Intensive, a day-long workshop taking place today at Playhouse Square from 9 a.m. to 5 p.m. According to the press release, this program is “ideal for dancers studying a variety of disciplines and those who seek to be a well-rounded performer. Participants must be advanced level dancers in high school or college (ages 16 and up).” The day concludes with a class of Broadway choreography from Laura Irion, famous for being from the Broadway cast of Rodgers & Hammerstein’s Cinderella. Registration costs $50 and lunch is provided. (Niesel)

Photo via Wikimedia Commons
Elvis Aaron Presley was born on Jan. 8, 1935, under rather benign circumstances. His family was dirt poor, yet Presley would go on to become one of rock’s biggest stars. The guy would’ve been 80 this year, and to celebrate his birthday, several of the world’s best Elvis impersonators will be on hand for a gala concert at 7 p.m. at the State Theatre. The Elvis Birthday Tribute will cover the four main eras of Presley’s musical history: the rockabilly years, the military/movie years, the ’68 comeback special and even the Las Vegas jumpsuit years. This year’s show will feature Shawn Klush, Ryan Pelton, Cody Slaughter and Rock and Roll Hall of Fame inductee D.J. Fontana, who used to play in Elvis’ band. Tickets start at $10. (Niesel) 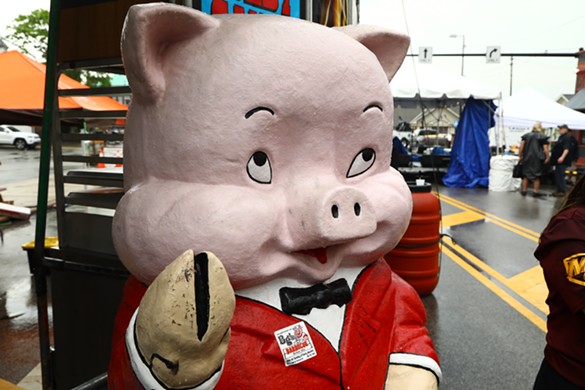