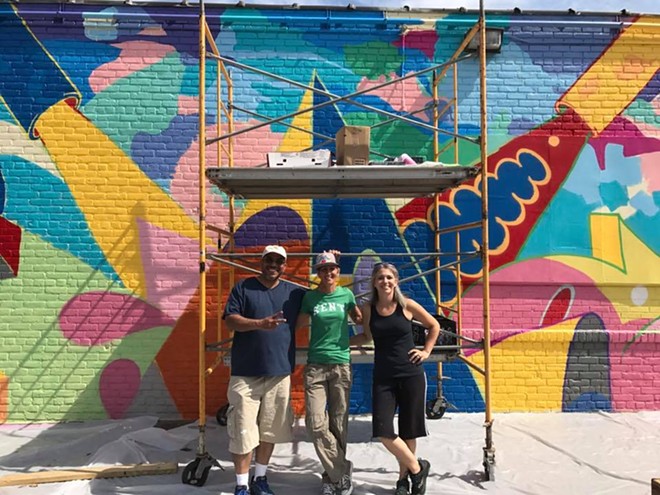 From left to right: Chicago-based artist Ish Muhammad, Graffiti HeArt president and founder Stamy Paul and Cleveland artist Eileen Dorsey
Here in Cleveland, the best results often come from the best collaborations between residents, businesses, organizations and communities. This week, a local artist is hosting an artist from Chicago, and two arts organizations and one local business are teaming up to offer both artists a canvas to commemorate their experience.

Typically, artist exchange programs are organized by nonprofit organizations and sponsored by public and private grants. However, Cleveland-based painter Eileen Dorsey and Chicago-based artist Ish Muhammad have created their own artist exchange program this summer. In May, Dorsey travelled to Chicago and exhibited works in Muhammad’s studio in Chicago. This month, Muhammad visits Cleveland for a week, culminating in an exhibition of works at Dorsey’s studio as part of Third Fridays at 78th Street Studios from 5 to 9 p.m. on Friday, September 15.

With a partnership like this, one might assume that these artists know each other well or that their work shared many similarities, but the artists only met a year ago and their work is quite different. Dorsey is known for her landscape paintings, while Muhammad describes his work as post-graffiti abstract expressionism. As artists, the only shared traits seem to be that both artists work in studios with more than 50 other artists, and these respective venues (78th Street Studios in Cleveland and Zhou B Art Center in Chicago) both host monthly events on the third Friday of each month.

Dorsey and Muhammad were introduced by family members. Muhammad’s wife and Dorsey’s sister-in-law both work at McCormick Place in Chicago, the largest convention center in North America. When the co-workers realized they both had artist in their families, they decided to introduce the two. When Dorsey visited her brother in Chicago around this time last year, the artists met at a restaurant and quickly bonded over discussion of their studios and immediately began discussing a studio swap residency. Just a couple of months later, they finalized all the details.

Reflecting on her initial meeting with Muhammad, Dorsey says, “We all went to lunch at a potpie restaurant, and that's when Ish and I met and started talking about our studios. We noticed our spaces had a lot of similarities like third Friday art walks, it's an old warehouse, it's an event space and there are also several other creatives in the buildings. We just threw it out that we should collaborate and maybe do some sort of residency. Ish invited me to come to his place first.”

A native of Cleveland, Dorsey received a BFA in Painting from Kent State University in 2006. Her vibrant and expressive landscape paintings have been showcased in gallery and museum exhibitions at venues such as: ARTneo, Baldwin Wallace University’s Fawick Gallery, the Bulter Institute of American Art, the Ohio Art Council’s Riffe Gallery and Tri-C Gallery West. Additionally, Dorsey’s paintings reside in the permanent collections of the Cuyahoga County Administration Building, cARTa, Southwest General Hospital and University Hospitals Case Medical Center.

A self-taught artist, Muhammad earned a BS in Electrical Engineering at Purdue. Although he was born in New York City, Muhammad has lived in Indiana for more than thirty years. Describing himself as a post-graffiti abstract expressionist, Muhammad’s work has been exhibited nationally and internationally in galleries, museums and site-specific installations at venues such as: Indiana State Museum, Indianapolis Museum of Contemporary Art, Chicago Cultural Center, Swope Art Museum (Terre Haute) and Maison de Metallos (Paris, France).

As part of the artists’ time in each city, they are collaborating on projects together. In Cleveland, Dorsey and Muhammad are creating a large-scale mural on the west-facing wall of Stockyard Meats in the Gordon Square Arts District (GSAD), just blocks from Dorsey’s studio.

“Chicago was great,” Dorsey says. “The artists I met there are hard-working and very kind. The studio I worked out of was in Bridgeport on the southside of the city and reminded me a lot of my studio base in Gordon square. Ish and I collaborated on a small painting while I was in Chicago. The mural we will be working on will be 30 times as big but I am confident in our collaborations.”
The mural was created between September 10 to 12, and is possible through a partnership with local nonprofits Graffiti HeArt and LAND Studio, as well as the business owner and community development corporation.

"It's gratifying to see this all come together," says Graffiti HeArt president and founder Stamy Paul. "The beauty of this is the amazing collaboration that has occurred between Gordon Square Arts District, LAND Studios, the building owner and Graffiti HeArt to make this project move forward. This is our third public mural in Cleveland (others include 'Greetings From Cleveland', and the Tyler Village color block wall), however Graffiti HeArt has done numerous projects (over 30) around Northeast Ohio in schools, corporations, private, and commercial settings on both external and internal walls and canvases. Through these projects we have been able to send 15 high school students through the Pre-College Program at the Cleveland Institute of Art. We are very proud to be a part of the GSAD mural project.”

The mural is the first project of an initiative led by Carrie Carpenter, executive director and founding board member of the Gordon Square Arts District, to bring as many as eight murals to the neighborhood over the next six months. Stockyard Meats has been a family business for more than thirty years. Owner Richard Gilliam says, “This has been a great experience. We just met with LAND Studio and Graffiti HeArt a week ago and in a few days my wall was primed and ready to go. We are excited to be the first of many murals going up in GSAD and looking forward to this being a destination for many that frequent the community as well as new visitors to our area."

“I am beyond excited to start this mural collaboration,” Dorsey told Scene over the weekend. “It is the biggest wall I have worked on, but Ish is an experienced muralist and I am confident in our collaborations. We just grabbed the last of our supplies and will get painting Sunday morning. We were going to start on Saturday but we took the day to really check out the neighborhood and I am happy we did because it will really influence our decisions. I am so honored to be the first of several murals that will go up in my neighborhood. Everyone at Graffiti Heart, LAND Studio and Gordon square arts district have been really supportive.”