Hurricane Harvey Dogs Up for Adoption in Parma

Photo Courtesy Northeast Ohio SPCA No-Kill Pet Shelter/Facebook
Alexis, a female hound mix, is now available for adoption.
When Hurricane Harvey ravaged the Houston area last month, many Texans were separated from their pets. Local animal shelters — many already at capacity — didn't have enough room for the creatures left behind. Now many shelters around the country are easing that burden, including the Northeast Ohio SPCA Shelter in Parma.

Eighteen Texan puppies and dogs are now up for adoption at the no-kill Parma shelter.

The non-profit has helped rescue dogs from the south for years, but never out of Houston, executive director Jeff Kocian explains over the phone.

"In this case we were contacted with a group that worked out of Houston and they were desperate for space," Kocian says. "These were animals that were already in the shelter when Harvey came through, and they needed to move them to make room for lost animals." 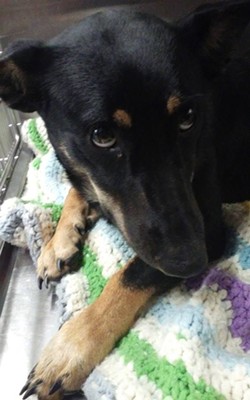 Photo Courtesy Northeast Ohio SPCA No-Kill Pet Shelter/Facebook
Bexy, a female shep mix, is also available for adoption.
After a long journey from Texas, Kocian says all the dogs and puppies available for adoption are sweet and healthy. All dogs, which are $75 to adopt, are up to date on shots and are spayed or neutered.