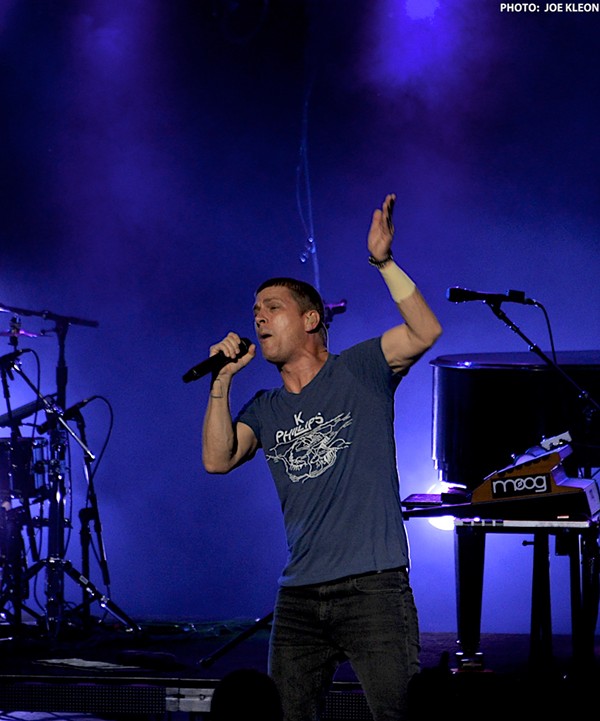 Joe Kleon
Matchbox Twenty hasn’t put out an album in five years, and Counting Crows haven’t released a new studio effort in three years. But that didn’t stop thousands of fans from jamming into Blossom last night for the groups’ A Brief History of Everything Tour.

The place looked to be about three-quarters full, and the two acts offered up sets littered with their hits from the '90s, something that went over particularly well with the crowd of mostly thirty and fortysomethings.

Matchbox Twenty began its 90-minute set with “Real World.” The song’s sentiment is a simple one, and yet lanky singer Rob Thomas, who with his jeans, crew cut and tight-fitting T-shirt looked more as if he might be a jock than a rock star, delivered the lyrics like he meant it. “I wish the real world would just stop hassling me,” he sang over and over, eyes bulging and veins popping out of his neck.

Give the guy credit for being engaged. He regularly pranced the length the stage and did all he could to keep the crowd entertained. “I just love you guys — and not in an L.A. kind of way,” he said at one point. “We’re sharing a moment.”

While there was a certain sameness to pop rock tunes such as “3 A.M.” and “Push,” “She’s So Mean” had a bit more bite to it as it featured vigorous drum rolls, sneering vocals and some extra percussion, and “Hand Me Down” benefited from a touch of slide guitar and a vigorous song-ending jam. “Mad Season” thrived on a menacing blues guitar riff, and a tempered rendition of the ballad “Back 2 Good” featured Thomas’ most compelling vocal performance of the night as he adopted a soulful wail. "You've made a Wednesday night feel like a Saturday night," he told the enthusiastic fans that stood for most of the band's set.

While Matchbox Twenty delivered renditions of its tunes that stayed faithful to their studio counterparts, Counting Crows opted to improvise and rework some of their biggest hits. During “Mr. Jones,” for example, singer Adam Duritz, who, with his glasses, tattered jeans, dreads and goatee looked like a cross between Groucho Marx and a street musician, made up lyrics on the spot. It was difficult to even recognize the tune at times, and Duritz’s nonchalant performance made it seem as if he didn’t care to play it.

He also improvised heavily in “Palisades Park” a lengthy overwrought tune that came off as it were a bad Meat Loaf song. Duritz and Co. were better off when they stuck to the script and didn’t meander. “Hanging Around,” a rousing duet that featured a guest appearance by Thomas, worked well because Thomas kept Duritz in check, and the group sounded sharp on “Rain King,” a folk-y tune driven by a beefy organ riff and Duritz's Van Morrison-inspired vocal delivery.

At the end of "Rain King," Duritz held his arms up the sky and cracked a smile, suggesting it’s one of the song’s from the back catalog that he genuinely enjoys singing. Too bad he didn’t display that emotion throughout the rest of the 90-minute set.