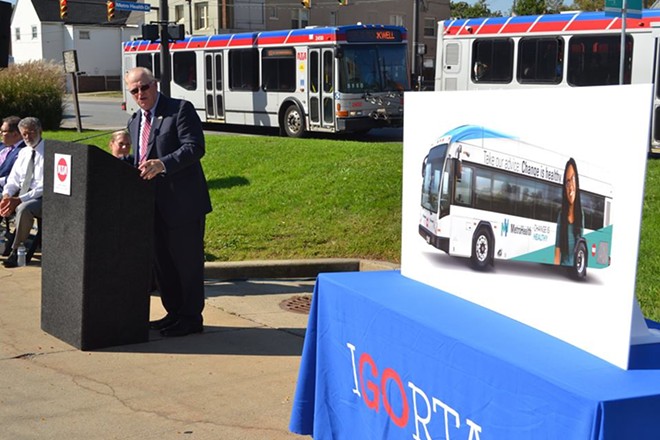 Routes 51-A, 51-B and 51-C connect the MetroHealth medical campus with Downtown Cleveland to the north and the suburbs of Broadview Heights, Garfield Heights, Independence, Parma, Parma Heights, Middleburg Heights, Seven Hills, Strongsville and Valley View to the south.

In March of this year, MetroHealth and RTA inked a $4.1 million, 25-year naming rights deal.

riderta.com
“The number 51 bus route serves the West 25th Street Corridor and is among the most popular routes in the RTA system," said RTA top dog Joe Calabrese in a press conference yesterday.

With 2.1 million annual riders, Route 51 is the system's second-most-popular route, second only to the Health Line, Calabrese said.

“We have a shared vision with RTA about creating a better West 25th Street and a more livable Cleveland,” Boutros said. “The MetroHealth Line is one of the first steps of where we want to go with our campus transformation. We are not just building a new hospital, we are creating a livable green space for the community, and now we have a way to help all people get there.”

To that end, RTA said, revenue from the MetroHealth Line sponsorship ($125,000 in the first year) will be used to upgrade landscaping and bus stations along the route.