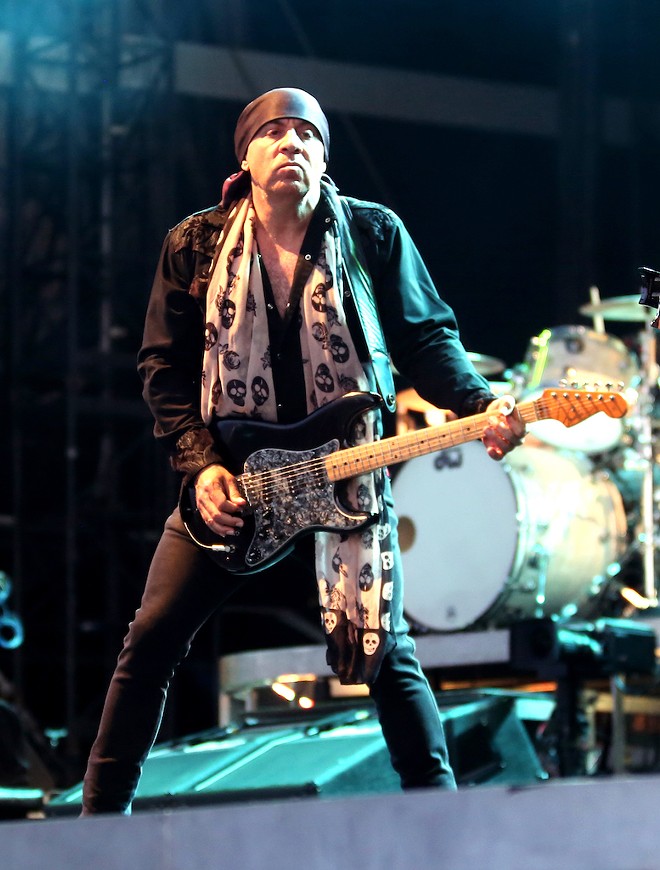 Big Hassle
When Little Steven Van Zandt put out his last solo album, Born Again Savage, nearly 20 years ago, he didn’t mince words in the liner notes. “We live in an insane asylum. A barbaric, merciless cesspool.” As we point out to the guitarist early in our recent phone interview, he could have easily made a sequel, considering the current political climate and state of the world.

“Well, yeah, I mean, first of all, the lyrics of a lot of those solo records I did in the '80s, they do hold up very well, unfortunately,” he says with a big laugh. “Very little has changed. But you know, more than that, I think when I did those records, it was important, I felt, to shed some light on a lot of things that were kind of hidden or not being talked about. There was nobody being political back then and I just felt it was important.”

Now, he says, with the 24/7 news cycle, you don’t have to point out to everybody what’s going on. It’s pretty obvious.

“I mean, I don’t have to explain Donald Trump to anybody. He explains himself every single day, Van Zandt says. “So it was kind of liberating in a funny way, where I was able to make a record that wasn’t political, without feeling any kind of guilt. It was just like, okay, let’s make a record like everybody else makes, for a change! [Laughs] I never did that before! It was a weird feeling, to sort of have the music come first!”

His sixth studio album, Soulfire, arrived earlier this year and could be categorized as a happy accident. In the fall of last year, he was wrapping up his latest round of touring work with Bruce Springsteen and the members of the E Street Band. He already had plans to go over to the U.K. to celebrate his wife’s birthday and also be on hand to mark the 80th birthday of his friend, former Rolling Stones bassist Bill Wyman. The timing of his trip was fortuitous. A friend invited him to play the London Bluesfest and for the occasion, he put together a new version of his longtime solo band, the Disciples of Soul, the “ever-changing group of misfits, rogues, and roustabouts” as he terms it.

While some folks might keep things economical, Van Zandt went big and ultimately took a 15-piece band overseas including a horn section and three backing vocalists. He’ll bring that same oversized group to the Cleveland area for his upcoming show on Friday, Oct. 6, at Hard Rock Live, by the way. “I gotta reproduce this record and it’s a big sounding record,” he says. Rehearsing a 22-song setlist for the gig, he quickly realized that it felt like something that was more than just a one-off gig.

“It sounded like an album right away. I thought to myself, ‘You know, it might be time,’” he recalls now. “Even though I wasn’t ready to write a whole new album. I thought it might be a good opportunity to reintroduce myself. And kind of use it as an opportunity to not only reintroduce myself, but actually introduce myself in some ways that I’ve never done before. You know, putting some rootsy stuff on there — I never did a blues thing before, I never did a doo-wop song before and up until this album, really, the politics always came first. It was like, ‘What do you want to say? And then what’s the appropriate music for that?’ Not that I compromised the music in the past, but it always was kind of second place. This is the first record I’ve ever done that wasn’t political, so it kind of featured me as a songwriter, as a singer, as a guitar player, as an arranger, a producer, you know. It wasn’t at all about the politics. It was a first — the first time I ever did that.”

The London gig opened the door for Van Zandt to road-test the material and the spirit and the joy of the concert carried over into the studio, where they completed work on the album in just six weeks from the opening moments to the finished mix. The album sessions gave the guitarist a chance to not only revisit songs that he had been involved with over the years, but also, the chance to honor some of his favorite artists and influences. His version of Etta James’ “Blues Is My Business” captures her trademark vocal stylings and mannerisms and he says that the process of recording songs like that one and “Down And Out In New York City,” which James Brown had recorded in the early '70s, took him back to his own beginnings.

“It was kind of full circle, back to when we started the Jukes at the Stone Pony. It was that kind of a spirit, when we started,” he says. “Before you really start to write songs, you’re in that bar band stage of your development, which is an extremely important stage of your development. Unfortunately, that’s being skipped by a lot of bands these days.”

He says that period of development is a critical one, where the band is doing their favorite songs and then starting to play around with new arrangements, slowly beginning to learn the process.

“You’re in that transition towards becoming a writer, which is going to be the next phase,” he explains. “But you’re setting your own standards, by playing covers and your favorite songs. You’re setting standards that you’re going to try and leap when you start to write. So it was back to that kind of attitude. In both of those cases, I came up with arrangements that I thought were unique enough and enough of a contribution that I felt justified putting them on a record. I was really quite happy with them and it was a lot of fun to pay tribute to those two great artists.”

Soulfire also includes two new compositions from Van Zandt, including “City Weeps,” a song which he first began more than 35 years ago while working on his debut solo album. At that time, he had a concept in mind for a record that would trace the history of rock ’n’ roll chronologically, beginning with doo-wop. His idea changed and several decades later, he saw the opportunity to finally rescue the unfinished song.

“It just kind of laid there half-finished all of these years. It was always on my mind and it was one of my favorite things,” he says. “I just loved that whole doo-wop genre, and I finally finished it this year for this record. I’m quite proud of that, because the simplicity of it, you know, the thing about doo-wop is the simplicity and the innocence of it, is very, very difficult to capture. Because you know, you’re only innocent once and that was really even before my time. You know, I’m talking about the '50s. So I was able to get my head back into that more innocent time and finish the song and I’m really quite happy with that.”

“I Saw The Light,” the other new song on the album, is one that Van Zandt started writing for Richie Sambora, with the thought that the former Bon Jovi guitarist might be able to use the track for RSO, the new band he was working on with his wife, fellow guitarist and vocalist Orianthi. He heard the demos that they had been recording and really loved their combined styles.

“I started writing a song for them, and then we went our separate ways for a minute. By the time I caught up to Richie again, he had written like 30 songs for the album,” he laughs. “I figured, ‘Eh, he doesn’t really need this!’ So I finished it for myself. I had the riff, and I had some of the lyrics and I really kind of liked it. It turned out to be quite, quite good. It’s really the only truly new song on the album. The rest were all things that I’d written for other people through the years.”

Naturally, his work with Southside Johnny and the Asbury Jukes is well-represented with staple cuts like “I Don’t Want To Go Home” and “Love On the Wrong Side Of Town” in the track listing. Van Zandt chuckles when recalling how early Cleveland was on board with the Jersey-bred group.

“Cleveland was a major, major city for us,” he says. “Made even more important by crazy [radio DJ] Kid Leo playing the Jukes demos, which this crazy friend of ours, [record label executive] Steve Popovich, had leaked the demos to Leo before we even made the album! [Laughs] They were playing the demos on WMMS.”

Eventually, word started filtering back to Van Zandt and the members of the band that they were getting some unexpected airplay. He remains grateful to Popovich, who passed away in 2011, for the kickstart.

“I think Popovich kind of did it on a whim, because he was really a creative [guy]. You know, he was the last of the really great record guys,” Van Zandt says now. “He was one of the real old school promotions guys and I think he got a bigger reaction than he was expecting and the next thing I know, he was rushing us into the studio, saying, ‘We need to do an album, like right now. You’re already getting airplay on it!’ [Laughs] You know, before it’s recorded! I think it was just Popovich doing his wild man thing. God bless him, man. He was the greatest. The last of his kind. I miss him every single day.”