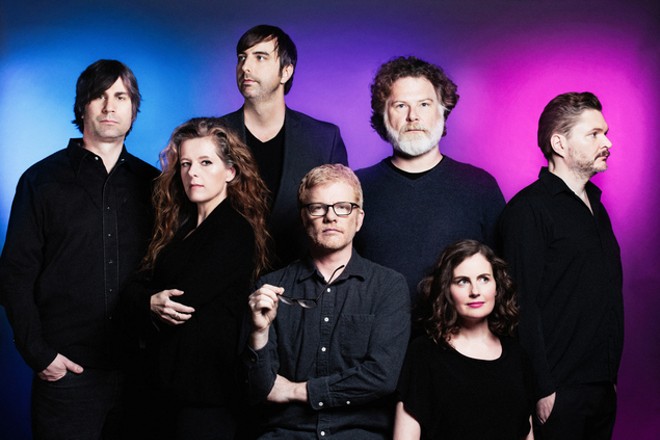 Jenny Jimenez
When critics and fans began to tell New Pornographers’ singer Carl Newman that his group plays power pop, he originally thought they were mistaken.

“It wasn’t until recently that I had someone explain to me what power pop was,” he says via phone from his New York home. The New Pornographers perform at 8 p.m. on Tuesday, Oct. 10, at the Beachland Ballroom. “I always thought it was wimpy music made by guys with skinny ties.”

But when he realized that Cheap Trick and Big Star represent two of power pop’s best-known practitioners, he changed his mind about the comparisons.

“I thought that makes more sense to me,” he says. “That was the music that inspired me. As a kid, I obsessed over [Cheap Trick’s] Live at Budokan, and I loved [Blondie’s] Parallel Lines and the first Cars’ record and the great music of that time. I always loved pop music. On the other side of it are the weirder bands like the Thinking Fellers Union Local 282. Somewhere between power pop and wanting to be a strange band lies our sound.”

Over the course of the six albums the band has released in the past 20 years, the group has mined those influences. So when it came time for the veteran band to write tunes for its latest effort, Whiteout Conditions, Newman says he wanted to head in a different direction.

“For me, I always thought it was too easy to write a straightforward pop song, and I feel like I’ve done that a lot,” he says. “After [2005’s] Twin Cinema, I felt like I had pushed my luck too far. I felt like we can’t emerge with album four and have more songs that sound like ‘Use It’ and ‘The Laws Have Changed.’ I thought that we needed to change into something else. That’s not really the smartest move for a band.”

The herky jerky, synth-heavy “Play Money,” which features singer Neko Case, a band member who’s also had a successful solo career, on lead vocals, was one of the first songs that Newman wrote.

“I really liked it,” he says. “It fell like a cornerstone and foundation. It formed a good template for the next record. I liked the vibe of it. I knew it had to be the first song on the record. I don’t know where else we could put it except at the beginning of the album.”

The songs all have a brisk pace to them. One reason for that is because the band incorporated a drum machine into the mix.

“There have been times in the past when we would listen to the drum part with a click track, and I would think the click track was part of the drum part,” says Newman. “I would want to leave the click track in. I would always get voted down. On this record, we did stuff like that. The song can have a drum machine in it and a real drum set and they can be playing at the same time. Why not?"

With its shimmering guitars and cooing backing vocals, “Second Sleep” has a psychedelic edge to it.

“That one was sort of an accident,” says Newman when asked about the track. “I was sitting at home and trying to arrange vocals by taking the vocals that had already been sung and just hacking them up. I didn’t mean to keep it. I was trying to explain to somebody what I wanted the vocals to do. I just wanted to take the note I liked and moved it somewhere. It ended up having this weird clipped vibe that I really liked. We embraced the artificial. We wanted to make the edits sound super obvious. Like on an old Guided By Voices album that they recorded on four-track, you can tell there are points where the song dropped out because something weird happened. I love that kind of stuff. I wanted to embrace that.”

With its fluttering electronics, the tender “We’ve Been Here Before” represents a nice change of pace; it shows off the band’s pristine vocal harmonies.

“The funny thing about that one is that when I wrote that song, I thought of it more of a strum-y Jeff Lynne pop song,” says Newman. “I thought of it as late ’70s ELO. We recorded it as more of an upbeat pop song. At some point, we just stripped everything away so it was just vocals and piano, and we went, ‘This is great.’ Sometimes when you’re trying to find the sound, you ask, ‘What does this song need?’ So you just get rid of everything. We got rid of everything, and I had to rewrite it. It was a ballad now. The chorus worked really well quiet but the old verse didn’t. I rewrote it, and we made it this bizarre psychedelic ballad.”

The New Pornographers, who’ll celebrate their 20th anniversary next year, continue to forge ahead even as the music industry has disintegrated. Whiteout Conditions represents the first album on the band’s own imprint, suggesting the band now controls its destiny.

“To me, this is what I do,” says Newman. “I think I’ll do it until circumstances literally force me to stop, and it gets to the point where I’m making no money and I have to get another job. Then, I might stop. I think I would still be the guy tinkering in his garage until I die. Maybe I’ll be the guy who, when he dies, they’ll go into my studio and find ten unreleased albums. Only then will I get my due, and everyone will say I did my best work between 65 and 75.”