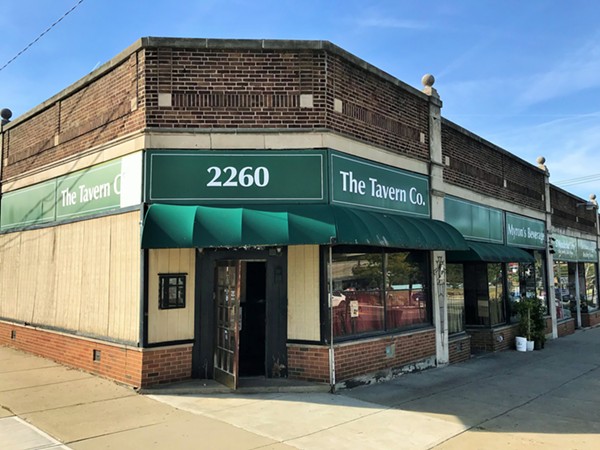 “You should have seen the place three weeks ago,” says Jeff King, new owner of the tavern that commands the corner of Kensington and Lee roads in Cleveland Heights.

For more than 30 years, that location went by the name of The Tavern Company. That pub’s last owner, Chris Armington, took the name with him when he relocated his business last year to The Colony across the street. King (left ) and Poe
King and partner Brad Poe have been hard at work on the space since getting the keys in early September. In terms of physical condition, the aged pub was more than a little worse for wear. The new owners’ lengthy punch list includes sanding and refinishing the bartop and every wooden dining room table, pulling up the spongey carpeting in the second room and laying down new wood flooring throughout the entire space, redoing the restrooms, removing a drop ceiling in the second room to reveal 10-foot ceilings, painting every chair, stool and wall surface, and replacing most light fixtures and TVs.

The goal is to open the doors by Thanksgiving under the moniker of Kensington Pub.

For the last seven years King has worked at La Cave Du Vin as bartender and GM, but his hospitality days stretch back decades and include a 17-year run with the Johnny’s restaurant group. He and his partner worked side by side when their employer took over Little Bar.

“We were working at Johnny’s when we took over the Little Bar,” King says. “That’s the kind of place where you could walk in with muddy boots or wearing a bowtie. We’d like to bring that flavor to this place, where you can come over here right after your softball game or straight from a wedding and feel comfortable.”

The owners intend for the Kensington Pub to be an unpretentious American tavern offering familiar foods that are stepped up in terms of ingredient quality, technique and presentation.

In addition to the finer pub fare, the restaurant will offer a few a steakhouse items like a filet au poivre, a strip steak and sharable sides like roasted Brussels sprouts and horseradish mashed potatoes.

There will be a dozen draft beers and eight to 10 great quality wines by the glass.

Unlike most of its neighbors on the strip, Kensington Pub will serve food (perhaps a scaled-down menu) every night until 2 a.m. The restaurant will also serve Sunday brunch.

Down the road, the new owners hope to reclaim the boarded-over windows along the southern side of the restaurant and install a garage door that will connect the barroom with the 25-seat sidewalk patio.

To have such an iconic property on Lee Road vacant for the past year was worrisome, but the tavern's new owners not only are capable, experienced industry veterans, but also local residents. For that, the neighborhood is breathing a sigh of relief and is eager for the arrival.

“I’ve been in the business since I was a busboy at 14 and I’ve always wanted to have my own place,” King explains. “This is really exciting. While we’ve been in here working, there have been so many people that pop their heads in and say things like, ‘I’ve been coming here for 20 years!’”