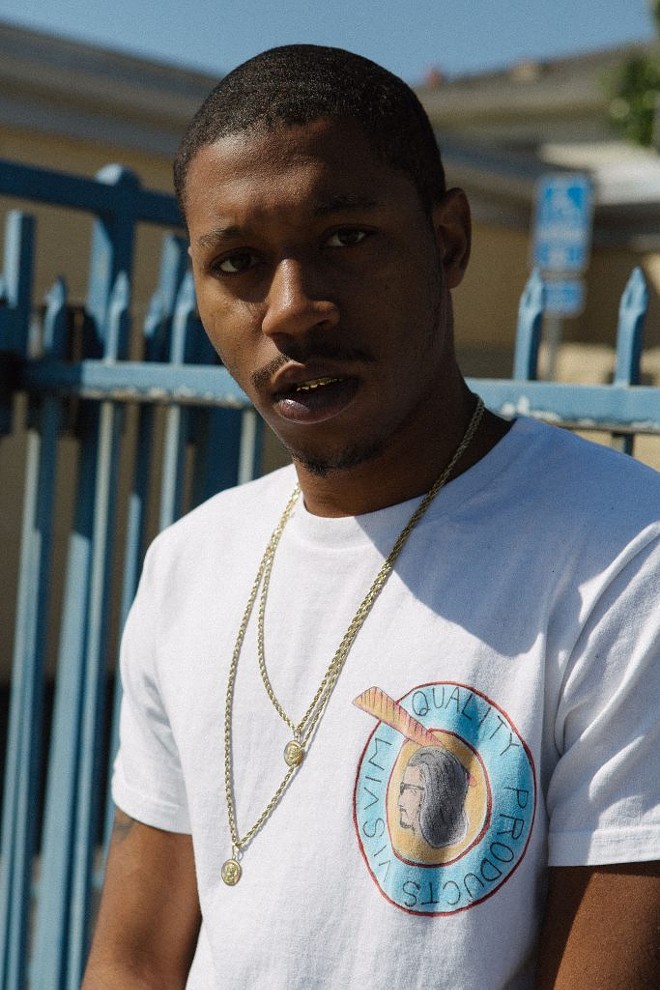 RCA Records
Boston-bred rapper Cousin Stizz turned heads with his 2015 mixtape Suffolk County. He followed that release up with the highly emotional MONDA,  an album he devoted to his friend, a cancer victim.

Earlier this year, after a reported bidding war, he returned with One Night Only, his major label debut. He virtually talks his way through the album's infectious lead single, the woozy “Headlock.” The track features a cameo courtesy of Offset, who delivers some rapid-fire raps over the plodding beats. It's become Stizz’s first mainstream hit, making him one of the only rappers out of Boston to receive national attention.

We recently phoned the cordial rapper in Boston, where he was visiting family members, to talk about the new album.

You grew up outside of Boston. What was that experience like?
I didn’t grow up outside of Boston. I grew up smack dab in the middle. It was cool. There were fun times, and sometimes shit got really crazy and dark. Other times, it was really bright and vibrant and loving and peaceful. Just like any other city in America.

What initially inspired you to start writing rhymes and rapping?
I always liked music, but I was into beats more than lyrics. That’s what got me to fall in love with hip-hop. It was the beats. I used to freestyle with the homies and stuff like that. One day, I missed my bus and just did some writing to pass the time, and I wrote my first rhyme. I think I was 18 at the time.

Your mixtape Suffolk County left a lasting impression. Why do you think it made such an impact?
It was fresh, I think. It was weird. It was my first time really rapping and taking music seriously. As a kid, I was just new to music. I had no musical background. I just came in and made something that sounded cool to me. It was relatable because I was talking about real things that were going on in my life and people just gravitated toward it.

The songs certainly have an honesty to them.
For sure.

Talk about creating MONDA, which is named your friend Damone Clark who died from cancer. That must’ve been an emotional experience.
Oh man, absolutely. It was a very, very emotional time. I told him I was going to do it. It’s one of those things where you have to keep your word. I had to force myself to make that happen. It was tough.

How did you know him?
I knew him from around the way. We all hung out like a brotherhood like that. Anybody I grew up, we were like brothers.

And what about One Night Only? What did you try to do with the album that you hadn’t done in the past?
All my projects have been pretty different from each other. If you listen to them, they just sound different. I make music that goes on with my life. That’s just what it is. I’m not one of those people who can just write crap. I can only write about my experiences. That’s how I’ve always been. My music is just about my life. For One Night Only, I’m now in L.A. I’m not in Boston anymore. I’m not in the hood, and I don’t have to deal with all of those things. I’m signed now and better off financially. Everything is a little bit easier, and the music feels easier. It has that easy vibe.

I like the sparse, drum machine-heavy production of “Lambo.” Talk about that track.
That was my boy Tee-WaTT. He has pretty much produced half of my catalog. He sent me that track. I just did what I do with everything, and I freestyled a melody in my head. I started freestyling rhymes in the back of the Uber and by the end of the night, it was a song.

“Headlock” has such a great hook. Talk about what inspired the song.
Alcoholism. I was in the studio in New York with [the producer] Vinylz, and I had my bottle of Hennessy in my arm in a headlock. I literally started rapping to my bottle. Vinylz was like, “Yeah, bro, keep that.” Boom, there it was.

What does Offset bring to the track?
The sauce. He brings all that sauce to it. It’s one of my favorites.

Did a particular incident inspire the song “Doubted Me”?
That isn’t a directly inspired thing. It’s just throughout my years of living hearing everyone tell me I couldn’t do it. I like flipping people off, and it gives me the motivation to wake up in the morning.

What’s been the key to leaving your troubled past behind you?
Oh, man. To move on from the thuggery? Music for sure. Self-belief and optimism. I think that’s it. Without those three things, I wouldn’t be in this position.

The album ends with “Jealous,” a tune that seems rather optimistic. Talk about what that song is about.
It’s about anyone who ever has had anyone tell them that they couldn’t do something. I’ve had girlfriends that told me I should stop rapping. I’m living proof that you should you never listen to anyone but yourself.

Critics often refer to the ’80s and ’90s as the golden age of hip-hop. How do you think today’s hip-hop scene compares to that of the past?
I think it’s its own thing. People will obviously compare the two. It’s different at this point. They’re not sonically the same. This is another era. Twenty years after this, they’ll be saying this is the golden era. Twenty years after that, they’ll be saying that was the golden era of hip-hop. It’s just evolving.