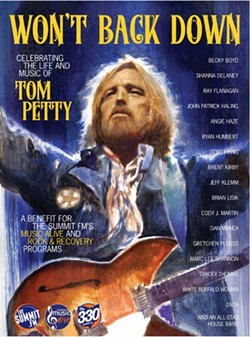 If he’s not playing solo dates, local singer-songwriter Ryan Humbert is paying tribute to icons such as Roy Orbison and Bob Dylan with large, extravagant shows.

In the wake of Tom Petty’s death, he’s announced he’ll honor the great singer and songwriter with a special tribute concert.

"There are few musicians who have been as important to my life and music as Tom Petty and I know I'm not the only one,” says Humbert in a Facebook post announcing the concert. “While he will go down in history as one of the great rock 'n' roll songwriters, he was also a man of the people; accessible and relatable.”

Won't Back Down: Celebrating the Life & Music of Tom Petty takes place at 8 p.m. on Saturday, Nov. 4, at E.J. Thomas Hall.

Proceeds will benefit the Summit FM's Music Alive and Rock and Recovery programs.