You'd be hard pressed to find a joint in Cleveland with more history than the Parkview Nite Club. The saloon officially opened up in 1934, when the ink was barely dry on the 21st Amendment, but it has been a public (and not-so-public) tavern since the turn of the century. To use the phrase "hidden gem" would not only be lazy and pedestrian, it would be inaccurate. While most certainly sequestered — the Parkview can be accurately described as a hideout at the end of the road in the middle of nowhere —the weathered spot is more dive than jewel.

What sets the bar apart from its well-worn brethren is the food, which has always punched well above its weight. Over the years the grub certainly has ebbed and flowed, but there always has been a fundamental desire to offer guests quality fare at neighborly prices. Recent changes in the kitchen are just the latest chapter in the lengthy quest to do just that. In spring, Joseph Zegarac accepted an offer to shutter his popular Lakewood-based eatery Chow Chow Kitchen and bring his talents to Parkview, a homecoming of sorts for the chef, who previously worked at the bar. "Chow Chow at the Parkview," as this new venture is being called, blends the best of both concepts into one seamless menu.

Fans of the short-lived Chow Chow already know that they can count on exceptional fried chicken and even better Nashville hot chicken. Neither, we are happy to report, have been damaged in the move. The former, listed as Winner Dinner ($11), combines buttermilk fried dark meat chicken with fries and a side of mac and cheese. The latter ($10) swaps the fries for creamy, crunchy coleslaw, a blessing considering the incendiary nature of that fire engine-red chicken. When we ordered it, our server felt the need to offer up a warning to the table, one that diners would be wise to take seriously.

Likewise, if you were fortunate enough to try the gumbo and/or ham and bean soup at Chow Chow, then you likely have fond memories of those smoky, spicy, slow-simmered brews. The gumbo ($3.75) is studded with andouille sausage and okra and ladled over white rice. The savory ham and bean ($3.75) is loaded with tender shredded ham and soft beans in a creamy, peppery base.

Zegarac didn't copy-paste the entire menu into his new digs, but his presence can be witnessed in the fish and chips ($11), an altogether fine version of the classic that would have been better if the catfish wasn't so muddy tasting. The aptly named Fat Kid Deluxe ($10.50), also an import, is a stoner's best friend. A wide-brimmed bowl is loaded with cheddar coated shells, drizzled with crimson-colored hot chicken oil, topped with sliced pickles and sided by thick-sliced, cheese-capped garlic bread.

This is hardly a one-sided relationship. Not only are Parkview favorites like the Philly and French Dip still on the roster, they, like pretty much everything on the menu, have gotten an upgrade. To craft the Dip ($9), whole top rounds of beef are seasoned and cured overnight and then very gently braised up to temperature. Those Phillys ($9) begin life as whole rib primals before being winnowed into cuts that become shaved ribeye.

At the urging of our server, we ordered a dish that we more than likely would have ignored: succotash ($11). It was a move that none of us regretted. While it looks like a simple mish-mash of odds and ends, the dish turned out to be a symphony of flavors and textures. Charred kernels of sweet corn, nubbins of carrot, braised beans and sauteed onions all rested on a crisp bed of firm but creamy-centered polenta.

For starters, crispy fried asparagus ($7.75) spears are stacked Lincoln log style and served with a smoky ranch dressing. The deep-fried pierogi ($7) would benefit from a filling with more character, but the crunchy potato-filled pockets make a damn fine snack and partner to cold beer.

Next month, the Parkview will unveil yet another new menu, a further refinement of the merger of brands, along with a heightened commitment to make everything better. That means bringing in more whole cuts, crafting items like bacon and sausage in house, and stepping up the beer, wine and cocktail programs, all in an attempt to adapt to a rapidly changing neighborhood. 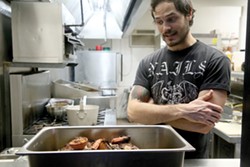 For decades, the Parkview lived life as a "destination bar," a polite way of saying that it was in a part of town few had reason to visit. Hell, most folks don't even know it exists. All that began to change over the past few years as lakefront development projects like Battery Park and the Edison literally rose from the ground all around the bar.

"With all this development happening — I think there's something like 300 new apartments coming in — we're not as hidden as we used to be," says Zegarac.