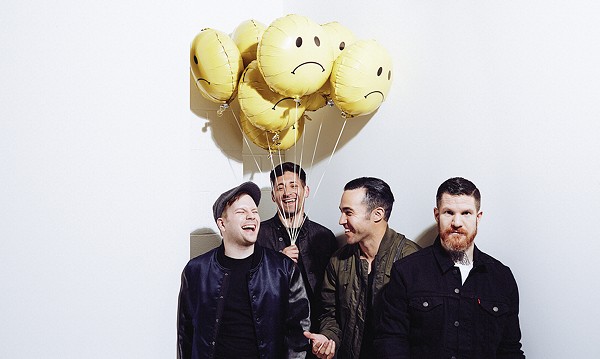 Pamela Littky
Save Rock and Roll, the 2013 album that emo rockers Fall Out Boy recorded with producer Butch Walker (Taylor Swift, P!nk), represented a remarkable comeback for the Chicago-based band.

The group had been on hiatus prior to its release; members reconvened in secret with Walker to lay down the tracks at his Santa Monica studio.

“Man, it was kind of crazy because we came back, and people made records differently,” says bassist Pete Wentz in a recent phone interview. The band performs on Friday, Oct. 20, at Quicken Loans Arena as it brings the tour in support of its forthcoming album, Mania, to town. “The producers we were into made songs differently. Butch helped us figure that out. He has this nuanced, super subtle thing. He can understand how to make rock bands sonically relevant in the landscape of 2014 or 2016 or whenever. It’s threading the needle, and he does it in such a graceful way. I think it’s because he’s written giant pop songs with P!nk but is a rock guy at heart. He was the perfect guy to re-launch [our career].”

Initially, Wentz and the other members of the band played in hardcore bands before forming Fall Out Boy on a whim in 2001. The group was supposed to just be a side project, but it quickly evolved into something much bigger.

“The interesting thing about punk rock at that time was that the stages were small,” says Wentz. “It wasn’t a leap to think you could be in one of those bands. That’s how it was. We were in a million terrible bands. It was just fun. We didn’t have enough of a music scene to have strictly hardcore or punk shows. It was ska and hardcore and pop-punk. It was really diverse. Because of that, you had bands that are influenced in ways they wouldn’t have otherwise. I also think that Chicago is the bastard child city of the other cities. People overlook it, and that’s good because you can form in your own petri dish because there’s nobody paying a ton of attention.”

Thanks to hits such as "Sugar We're Goin Down" and "Snitches and Talkers Get Stitches and Walkers,” the group had a good run throughout the early ’00s, but then it hit rock bottom after the release of 2008’s Folie a Deux. Fans started booing the group during live performances, and the guys decided it was best to take a break.

“I think that it was an odd time to be making music in general,” Wentz says when asked about the turmoil that led the band to nearly calling it quits. “The world became very, very pop. Pop music became dance music. If you weren’t four on the floor, you wouldn’t work at the time. Dude, when you’re just going and not ever coming up for air and not nurturing healthy relationships with each other or the outside world, that has something to do with it too."

He says the group wasn't constructed to be on MTV's TRL or grace the covers of music magazines.

"It all got a little twisted," he says. "Taking time off and allowing ourselves to become real life adults instead of guys who follow bodyguards through the airport was good. When you’re in a band or making a movie or whatever it is that has pop value, you want to keep the machine going. As long as the machine was going, that’s what others want. Doing a hard reset was important. We realized we needed each other.”

Wentz says some of the songs that will appear on Mania have been in the works for some time now. One good example: singer-guitarist Patrick Stump played him a working version of “Young and Menace” a couple of summers ago.

“I thought the song seems of the time, and we should put it out,” he says.

But the band retooled it and finally released it this year. With its soulful vocals and pulsating synthesizers, it features a flurry of dub step beats that sound like they could have come from a Skrillex song.

“We put the song out without realizing we didn’t have any other songs that were done,” says Wentz. “It started the stopwatch, so we started making lots of music. I remember looking at [singer-guitarist] Patrick [Stump], and I thought he loved it. He thought I loved it. The record was fine, but no one really loved it.”

A result, the band pushed back Mania’s release. Now, the album won’t come out until next year.

“If we keep putting out new music, it has to be something that’s great,” Wentz explains. “Otherwise, what’s the point? That’s when we wanted to take some time and make a record we really love.

The jittery “The Last of the Real Ones,” another single from Mania, features upper-register vocals and a catchy piano riff.

“Those lyrics have been kicking around for a while at this point,” says Wentz of “The Last of the Real Ones.” “It was one I tried to push Patrick to make on the last record. There just wasn’t a song that served it. We were driving to our producer’s house in two separate cars, and Patrick was writing in the car on the way, and those lyrics just happened to work with what he was writing.”

Wentz says that Jason Schwartzman’s character in the cult flick Rushmore inspired the tune “Champion,” an anthem for anyone who ever felt he or she didn’t fit in.

“I played sports in high school, but I was kind of a loser,” says Wentz. “I didn’t fit the mold. That’s who that song is for. So much of life to me is about getting through the hard parts. That’s what the song means to me. It’s a ‘champion’ for people who don’t believe in champions.”

Wentz says the band's concert at the Q will be an elaborate affair that he hopes will live up to fans’ expectations of what an arena rock show should be.

“In amphitheaters, you’re at the mercy of the weather and the shape of the amphitheater," he says. "In an arena, you control it completely. I want it to be when you walk out, you’re dumbfounded. I went to Blade Runner 2049 last night, and I felt changed after I went to it. It was so beautiful and well done and honest. That’s what I want people to walk away from our show thinking. I want it to feel completely brand new.”