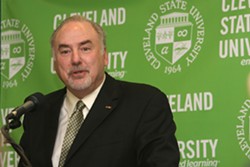 Courtesy of CSUOhio.edu
Berkman
Yesterday brought the debut of a new LGBT center on Cleveland State University's campus. It also brought an assortment of hateful anti-LGBT fliers to the school. CSU President Ron Berkman issued a statement on the incident last night. As many students, and some of the general public, noticed, Berkman spent about as much time extolling the virtues of free speech and the First Amendment as he did on confirming that the university is dedicated to inclusion. What was missing from that statement? Any outrage or pointed criticism of the fliers, which depicted erroneous (on the low end) suicide statistics for the LGBT community and urged others to "follow your fellow faggots."

It seems Berkman has heard those complaints, or maybe acknowledged the shortcomings on his own, because he issued a second statement today (in full below) calling the fliers "reprehensible" and announcing an opportunity tomorrow afternoon for anyone to discuss their concerns with him and his staff.
click to enlarge