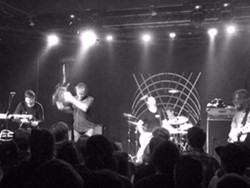 ERIC SANDY / SCENE
Minus the Bear returned to Cleveland for their only headlining show of this fall tour. (Silversun Pickups skipped last night's show. Their loss.)

And though the band came to us in a slightly different form, we've got to say that this was their best showing in Cleveland in years. They're always a high-energy, hypnotic rock band, but they just seemed locked in more than ever last night. Also, the setlist was dynamite, hitting all corners of the band's catalog (see below).

We'll point out right away that former drummer Erin Tate left two years ago, and Joshua Sparks has picked up touring duties. He fit in perfectly, which is very important; the angular and exploratory percussion on past albums is the heart and soul of Minus the Bear's math-rock evolution. Sparks was fun to watch.

ERIC SANDY / SCENE
As for the whole show — listen — the Agora Ballroom was a nice fit, as we've mentioned before that Minus the Bear needs an indie venue that complements its attitude. The crowd was super into it.

"Diamond Lightning" was the highlight, in my opinion; the band just seemed to gel as one proggy monster as this song built up to stirring climax. "Absinthe Party" is always nice to hear. And I really liked "Knights" in the No. 2 slot. Very interesting — and a very strong start.

Frontman Jake Snider, sporting an every-graying beard, riffed with the audience a few times, saying that tonight's headlining show was a special part of the tour for them. Later: "What's the difference between a good joke and a bad joke timing?" (I thought it was pretty funny.) "It's the only joke I know," he said.

Shout-out to the guy who started the "MTB!" chant before the band returned for its encore. "White Mystery" was a nice pick when they came back out. Hell of a show.