Frances McDormand Shines As an Angry Mother in 'Three Billboards Outside Ebbing, Missouri' 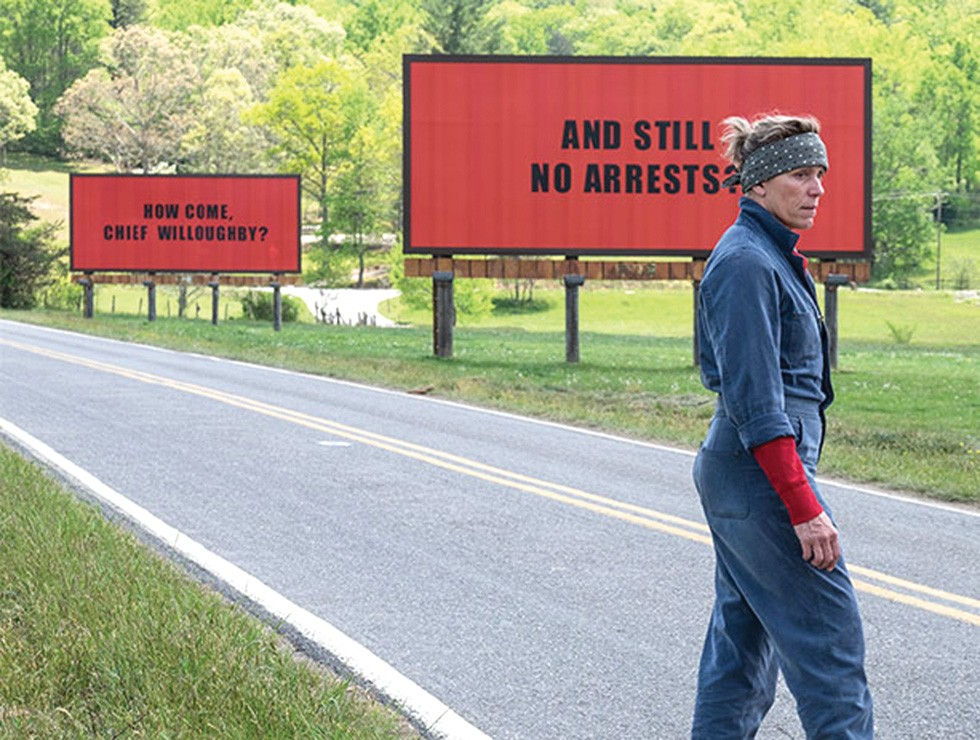 British and Irish playwright, screenwriter and film director Martin McDonagh has a wicked sense of humor. His distinctively dark sensibilities and sharp dialog distinguish fine, underappreciated films such as 2008's In Bruges and 2012's Seven Psychopaths.

You can now add Three Billboards Outside Ebbing, Missouri to McDonagh's canon of cult films. The movie opens areawide today.

The film tells the story of Mildred Hayes (Frances McDormand), a single divorced mother who becomes so enraged that the local cops have been unable to find the men who raped and killed her teenage daughter that she puts up a series of billboards questioning the competence of a certain Chief Willoughby (Woody Harrelson), the hick town's likeable leader.

Since Chief Willoughby is particularly popular with the locals, her billboards don't go over well. Jason Dixon (Sam Rockwell), a racist and hateful police officer who's had issues with anger management during the course of his short tenure as one of the town's cops, roughs up Red (Caleb Landry Jones), the owner of the advertising agency that rented the billboards to Mildred. He also arrests Mildred's friend and co-worker Denise (Amanda Warren) on some bogus charges just to screw with Mildred and get her to rethink the whole billboard thing.

Mildred's ex-husband Charlie (John Hawkes) also gives his former wife some grief about her motives and maintains that their daughter intended to move in with him because she couldn't stand Mildred. The revelation hurts Mildred, and yet all the harassment only invigorates her. She even strikes back at her dentist when he begins to question her about the necessity of her billboards.

Mid-stream, the film goes through a drastic change in tone and shifts from dark humor to dark drama as Chief Willoughby becomes hospitalized after he coughs up blood and realizes he might not have long to live. Jason goes rogue and continues to go after Red, calling him all sorts of hateful names, and the stern law enforcement agent Abercrombie (Clarke Peters) comes into town to make drastic changes to the police department.

The movie gets back on track as Jason and Mildred attempt to find a way to work together to discover who killed Mildred's daughter. But the film artfully shows how Mildred's stunt brought out the reactionary side of the small American town.

McDormand clearly carries this movie. The obstinate and tough-talking Mildred is a difficult woman to like, but McDormand portrays her in such a way that she still elicits our sympathy, even when she mistreats the local car dealer (an under-utilized Peter Dinklage), who has the hots for her, and alienates the few friends she has. All those Coen Brothers flicks apparently prepped her well for the role.