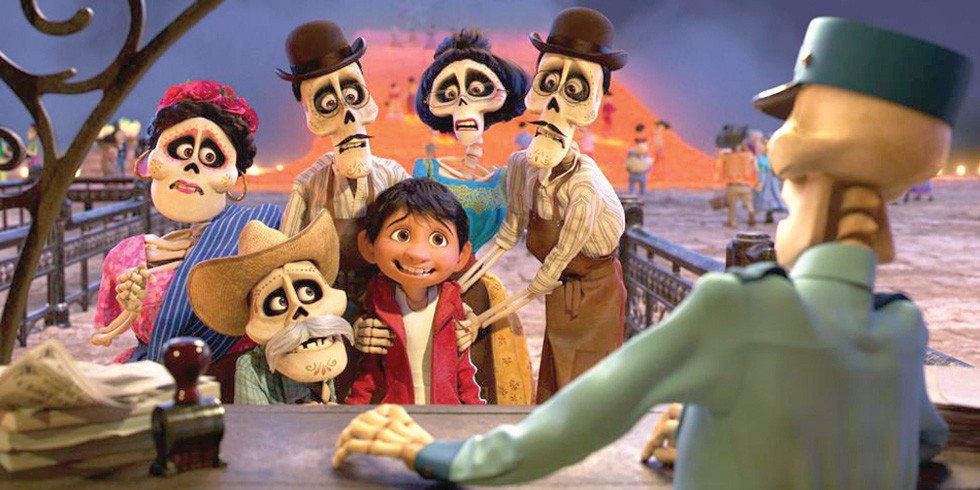 When he was a kid growing up in Pittsburgh, Christian Hoffman used to go to animation festivals with his father. He particularly loved shorts created by Pixar Animation Studios. When Pixar released 1995's Toy Story, he set his sights on getting a gig with the studio; he would land there in 1996. During his tenure there, he's worked on films such as A Bug's Life, Monsters, Inc. and Toy Story 2.

A few years ago, he signed up to work on Coco, an animated Day of the Dead-themed film. He got the gig as Characters Supervisor and recently came through Cleveland on a press tour to promote the new Pixar film. It opens areawide today.

"I had heard about Coco when it was in pre-production and story phase for a few years," he says while sitting in the lobby of the downtown Aloft hotel. "At that point, you know the core concept behind the movie but not a lot more. About three years ago, it started to formulate a bit more. They needed to staff up the leadership on the film. I interviewed for it, and the thing that excited me about it is that it's an original film and has this world of the dead to explore. That's really appealing. That meant we can put our explorer hats on and create something out of the ether."

The film focuses on Miguel (Anthony Gonzalez), a young kid who tries to get his family to lift its generations-old ban on music. The boy wants to follow in the footsteps of his idol, Ernesto de la Cruz (Benjamin Bratt). Desperate to prove his talent, Miguel finds himself caught in the Land of the Dead following a strange series of events. Along the way, he meets a charming trickster (Gael García Bernal) and they attempt to discover the real story behind his ancestry.

"Research is really important," says Hoffman. "Because this film is about the Mexican culture and holiday, it was important for us to make sure we got this right and were culturally sensitive. Before I joined the film, the director and story teams and art teams made numerous trips to Mexico to do research. They took lots of photographs to get inspired."

U.S.-Mexico relations weren't strained when production on the film began.

"We had no inkling that this would be the political climate," says Hoffman. "We're not trying to make a political film. The good thing is that a lot of the topics are universal. They're about family and pursuing your dreams. We feel like that will have universal appeal. If we can give people a little taste of Mexico and allow people to see the parallels with their goofy family and this goofy family in the movie, it will help people associate more with this holiday and with other cultures."

Hoffman says having the chance to keep the Pixar legacy alive has been exciting.

"Pixar is a place that's full of a bunch of perfectionists," he says. "There's a little bit of one-upmanship between films. We want to push the envelope and push the appeal of our characters. It's not a cutthroat competition. It's all really friendly. We help each other out and make sure that everyone is doing what they need to do. It's a great environment and collaborative. Everyone has the same goal. Each step is an opportunity for artists to add a little more and make the movie better."