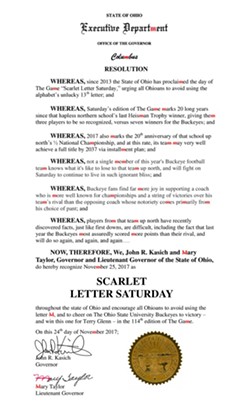 Get all your M's out while you can, folks. All your "marmalades," your "marsupials," even your "mawkish mammoths." Gov. John Kasich has once again urged all Ohioans to refrain from using "the alphabet's unlucky 13th letter" tomorrow, Nov. 25, the day of the annual OSU-Michigan football game.

According to tradition, Kasich's office released the state's annual official diss against "the school up north" and its coach's khakis. The resolution takes its time delivering biting commentary on the state of the schools' rivalry; this year, for instance, marks the 20th year since Michigan's last Heisman winner. (OSU has only won one since 1997, though: Troy Smith in 2006).

"Not a single member of this year's Buckeye football team knows what it's like to lose that that team up north," the resolution states, taking a He-Who-Must-Not-Be-Named tact, "and will fight on Saturday to continue to live in such ignorant bliss."

The Buckeyes will face the Wolverines for the 114th time tomorrow. Kickoff is at noon.