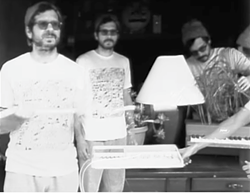 Courtesy of Tell All Your Friends PR
Nearly 15 years into a project called WHY?, Yoni Wolf is laying down arms. He’s been fighting for too long, sometimes against fate.
When he first started to write, Wolf considered his casual rap compositions to be “kid stuff.” He had grown up as a drummer and envisioned his music career taking him in a different direction.

Now, his work revolves around collaborations, poetry and remixes, his vocal delivery sliding almost undetectably from spoken word to rap. But to classify his music solely as rap would be a mistake. He performs with Open Mike Eagle at 8 p.m. on Saturday, Feb. 3, at the Beachland Ballroom.

WHY? positions Wolf’s vocals on a bed of indie rock and ambient, beat-based instrumentation. He’s not afraid to break into full-fledged croon mid-line, should it be warranted. It’s a breed all its own, and it never would have come to be if Wolf hadn’t succumbed to the early musical inclinations that he once considered a juvenile joke.

Around the time Wolf began to write his own music as a late teen/young 20-something, he met Adam Drucker, also known as Doseone. The established rapper was in the middle of a several-year stint in Wolf’s hometown of Cincinnati. Being around someone who practiced the craft of rhyming and beat-making encouraged Wolf to do the same.

“I didn’t feel like I could seriously do that before I met him," he says in a recent phone interview. "Something about meeting him, his confidence was infectious, and it just sort of got me going. We started working together on stuff, and I never looked back. I really fell in love with recording, and that’s really what got me. I wrote before that. In high school, I was writing rap songs and stuff. I just never took it seriously, and I never really recorded. But at that point, I got a little four-track tape recorder and got serious about it. We did it all the time, we’d make tape albums, dub tapes up and sell them ourselves to people.”

Similarly, Wolf never would have imagined himself a poet when he initially explored the literary form as inspiration for his work. He became interested in recorded poetry readings, thinking he might sample these recordings to lay over his beats. He ultimately developed a far more intimate relationship with the art form.

“I worked at this library on the college campus, and I would just randomly check out records, like LPs, of people reading poetry," he says. "I first started doing it because I was like ‘Oh, I’ll sample, it will be a treasure trove of vocal samples.’ Like you’re making a beat and you have like Dylan Thomas talking over your beat and it sounds really cool. So I’d pull out a Dylan Thomas record. And I started listening to them and I’d be like ‘My God, this is really beautiful, beautiful poetry.’ I remember pulling out a Galway Kinnell album, and he was one of my favorites. Marilyn Hacker I really liked. And these are just people that we happened to have the records at the library I was working at.”

Now, Wolf is a poet in his own right. In 2016, he challenged himself to write a poem every day, a goal he upheld for nearly ten months. Using this material as the primary source, Wolf is assembling a poetry chapbook that he hopes to have ready for his imminent tour. Sometimes, his poetry bleeds into his songwriting as it did for tracks like “Proactive Evolution.”

“I think poetry, for me at least, is an auditory art,” says Wolf. “It’s not like a novel; it really matters how it sounds, you know?”

Wolf, a chance poet and rapper, is well aware that life defies dictation. Instead of fighting the unknown, he’s learning to take uncertainties in stride, even if that means mentally escaping from time to time. On “One Mississippi,” a track from 2017’s Moh Lhean, Wolf sings “I know/I’ve got to submit to whatever it is in control/I know/Stop throwing shadow on shadow and let it all go.” Wolf has, until recently, been enduring battles he cannot win, keeping him in a perpetual state of exasperation.

Listen to any of WHY?’s previous five albums, and you will quickly pick up on the constant, nagging angst portrayed sometimes through acts of sexual frustration and sometimes through acts of self-harm. Brought about in part by a medical scare he experienced during the writing and recording process for Moh Lhean, Wolf has experienced a change of attitude.

“I don’t know if I’m in any way more in tune with the ways of the universe," he says. "I’m trying to be, to live in a more accepting way of whatever’s going on here. I still don’t know what is going on, at all. I think I feel best when I forget that I don’t know, in some ways, and kind of just live my days sort of with a smaller scope. Though it’s important, I think, to broaden that scope from time to time, whether it be through meditation or the use of illicit substances that might allow you to shift perspective. I think over the course of making that album and in the last, say, 5 or 6 years, I definitely have tried to jibe more with what is and be angry less. I’m still angry half the time though.”

At the end of last year, Wolf released all control of Moh Lhean itself, putting its ten tracks in the hands of peers who remixed them. The results will be part of an expanded box set due out Feb. 2.

Collaborations and guest appearances are a consistent part of WHY? Wolf even has me going for a bit about a guest appearance by one “Justin Beaver, not to be confused with Justin Beiber,” before admitting it’s a joke. But relinquishing control of an entire album, leaving the fate of all ten tracks in the hands of others, is completely new territory for Wolf.

“I didn’t want to dictate,” Wolf explains. “I really let them do their own thing once we decided who we wanted to work on them. And I think everybody gave a fresh take on the songs. I think it was very successful.”

Even with his new appreciation for peace, Wolf still has the characteristic restlessness of a true artist. Although he now owns a house in his childhood city of Cincinnati, it would be difficult for him to stay there all the time. He seeks a balance between adventure and home life, a balance that is most easily satisfied by touring — he’ll be on the road through February and March.