Ritchie Blackmore bids adieu to his hard rock past. 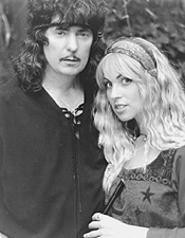 A princess and her prince: Candice Night and Ritchie Blackmore.
Guitarist Ritchie Blackmore has left behind the hard rock of Rainbow and Deep Purple to play Renaissance music, calling his new band Blackmore's Night and opting for airy mandolins, feathery tambourines, and jaunty harpsichords.

So why did this fair man on the silver mountain seek quieter ground in the valley below? On the surface, it might appear Candice Night, a maiden with a golden voice, seduced the rock hero with her angelic looks and ethereal voice. Blackmore met Night ten years ago at a charity soccer game in the lovely villa of Long Island, New York, and is now betrothed to the young princess. Blackmore, however, always had a keen interest in the Renaissance style, which he says is often incorrectly called Celtic.

"To anybody that is a fan, there is not such a big difference in my playing now than there was 25 to thirty years ago," says Blackmore. "I'm still drawing on the same types of progressions. They are very similar. For instance, the middle solo of "Highway Star,' if it was played on an acoustic guitar, could easily be put into a Renaissance form."

Blackmore's Night's second album, the recent Under a Violet Moon, induces visions of jousting knights, midgets, and court jesters. What's perplexing isn't so much the change of direction for Blackmore as the timing. With countless reunion/classic rock tours -- from Styx and Foreigner to Jethro Tull -- pillaging the countryside, it would seem the time has come for Blackmore to be touring again with Deep Purple.

"On the last Purple tour, we were doing very good business," he says. "I felt like I was in Spinal Tap then. Everything was so cliché. You know, Purple was a good band with good musicians, but I felt we had come to the end of that type of music. Not that I'm against reforming now and again, and playing for a couple of weeks, but I just couldn't go on being serious about playing that music from the '70s every day. And it used to get to me. I used to get very frustrated, because I didn't think we were being particularly honest with the audience. The singer would forget the words, and nobody cared. Everybody cared about how much money was being paid out more than musical content."

One might venture to guess that after the Blackmore's Night tour ends, Blackmore's pockets may be a little lighter. It could be a good time to get ye olde band back together and plug in the electric guitars -- not that Blackmore cares about money.

"When we put this together, it was something within our hearts," he says with utmost sincerity. "And we realized we were going against the grain, going against the mainstream of music. But sometimes in life you just have to do something. It was so overwhelmingly right for us to do. We thought we should carry on, regardless of what promoters or management would tell us."

Blackmore says that there are many similarities between rock music and the music of the Renaissance era -- that is, they both evoke emotions and are celebrations of thy true self. As for the live show, with Blackmore's name attached, you have to wonder if the good folk who show up thinking they're going to get a testosterone-filled evening of grand guitar solos and fist-pumping rock will be disappointed.

"What we try to do with our music is we like it to be an informal event and have everybody involved -- not just have these rock stars on stage with laser beams and smoke bombs," he says. "We like to think of ourselves now as being part of the audience. And especially if they're dressed up in Renaissance clothing, we have them on stage to dance and do whatever they want to do.

"So, it's more like a family thing on stage," he says. "It's not so much pressure. We're trying to be a lot more honest and just be part of the crowd. That's why we try to avoid playing very big venues, because we prefer the intimate thing. In fact, I prefer the much smaller venues."

Fans of Deep Purple and Rainbow need not despair -- Blackmore plugs his guitar in at the end and will play a few classics from his Rainbow days.

"Luckily, a lot of Ritchie's stuff from Rainbow has such a strong, melodic content," says Candice Night. "It translates easily, even having a female voice and playing an acoustic guitar in it if you wanted to, instead of having a screaming voice over it with those loud Marshalls blaring away. As long as people understand that it's not Ronnie James Dio out there fronting the band."

While it's unlikely Blackmore will find the same (or any) success with Blackmore's Night, his original band Deep Purple is still in the running for induction into the Rock and Roll Hall of Fame. And fittingly, Blackmore could care less about such petty accolades.

"I said this before: To me, the Rock and Roll Hall of Fame -- without sounding like I'm snubbing it -- has no interest to me," he says. "I don't know who's in it and who's not. And I find it quite meaningless."