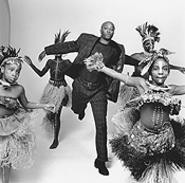 Julio Leitao, sporting traditional Harlem attire.
Some dancers are inspired by the graceful moves of Fred Astaire and Ginger Rogers. Others are enticed by the bumping and grinding of Dirty Dancing's Patrick Swayze and Jennifer Grey. But for Julio Leitao, it was watching his mother perform the powerful tribal dances of his ancestors while growing up in Angola.

"In my childhood, when we danced, it was a celebration of who we were," the 34-year-old dancer and choreographer recounts. He now teaches the primal moves and the mysterious folklore behind traditional African dance to a group of young dancers in Harlem known as Batoto Yetu.

Clad in grass skirts, exotic body paint, and flamboyant headdresses, the 20 child performers, ranging in age from 7 to 16, will make their Cleveland debut February 5 at the Allen Theatre by dancing the enchanting folk tale of the Mukishi, a chameleon-like spirit believed to appear at crucial times in the Angolan villages of the Luba and Tshokwe tribes. The fast-paced performance tells how the Mukishi rescues a young boy's village from evil spirits and, in the process, takes the child on a spiritual journey through its mesmerizing power of dance.

"This is very different from anything you've seen," Leitao asserts. "[The audience] can expect to feel Africa -- what the country is culturally. We have created these masks and dances to bring the excitement and allure of African mystery to the stage."

Ten years ago and thousands of miles from his native land, Leitao's dance company formed on an inner-city playground in Harlem. It all began when Leitao, who immigrated to the U.S. in 1985, abandoned a budding career as a ballet dancer with the Princeton Ballet and the Kathryn Posin Dance Company. The controlled, refined moves of classical ballet were like a "9-to-5 job," Leitao laments, unable to forget his roots or the dances his mother taught him. "For me, the dream of dance was what I did in my culture. African dance is a part of me and who I am."

Shortly after, he began teaching African dance at the National Black Theater, where he noticed curious young onlookers watching his classes -- aspiring dancers who couldn't afford the lessons. Moved by their desire to learn, Leitao began holding free African dance lessons on the playground, and thus Batoto Yetu (Swahili for "our children") was born.

"We made our own costumes, with the exception of some of the beading, which is made by the Maasai tribe in Tanzania and Kenya," Leitao proudly notes. Even the company's four adult musicians, led by Cleveland native Roderick Jackson, use traditional African instruments such as the djum djum, a West African bass drum; the songba, a small bass drum; and congas.

The dance company now rehearses in the Aaron Davis Hall in Harlem, where they polish their moves once a week for five hours. From the shimmying of their raffia grass skirts to the ferocious beating of their drums, the company is nothing short of an authentic African celebration, and although they're amateur dancers, they've performed at some prestigious venues. Their first public performance was in the United Nations' General Assembly room, and they've since performed with such high-profile entertainers as the Fugees and blues legend B.B. King. They've also appeared on Sesame Street, The Today Show, The Rosie O'Donnell Show, and in ads for Gap Kids.

Although he's proud of their success, Leitao says he most hopes the dances that inspired him to become a choreographer will also foster pride and self-esteem in the Harlem youths of Batoto Yetu, who once only admired his classes from afar. -- Ginger Burnett