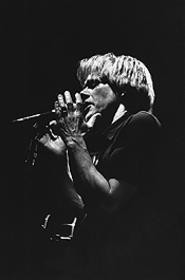 Walter Novak
A side of Bacon.
The Bacon Brothers
Odeon
February 25

Take away the name recognition that actor Kevin Bacon brings to the Bacon Brothers -- a band he fronts with his brother Michael -- and you've got a standard-issue rock act that would be lucky to fill venues one-quarter the size of the Odeon and is hard-pressed to get even a record deal. That the Bacon Brothers, who are on tour in support of their second album, the aptly misnamed Getting There, drew a far-less-than-capacity crowd suggests that the allure of Kevin's rock-and-roll persona has started to dwindle. And with good reason. The band's folk-rock music sounds too much like Jimmy Buffett and too little like Tom Waits, whom Kevin and Michael cite as an influence. The Bacon Brothers may have a following among the VH1 set, but they're certainly not good enough to make Kevin reconsider his acting career.

The live show had some superficial appeal -- viewers got to see Kevin's chiseled good looks up close. But the Bacon Brothers, who each sang and played acoustic guitar, and were backed by a four-piece band, haven't written any great songs and showed no signs of improvement on a new, previously unrecorded track they debuted. Despite what they might think, they're not even close to "getting there."

Unlike actor Keanu Reeves, who almost seemed embarrassed to be on the stage with his band Dogstar, Kevin was at least easygoing and animated. He bantered freely with the crowd, sharing details from his visit to the Rock Hall earlier in the day. In fact, Kevin was guilty of hamming it up too much -- despite being a crowd-pleaser, covering Kenny Loggins's "Footloose," the hit from the movie in which Kevin starred, was an obvious move. Similarly, the Smokey Robinson cover that closed the show was just not passionate enough. Playing a majority of songs from Getting There, the Bacon Brothers veered between humor-laced pop ("T.M.I.") and watered-down Americana ("Arm Wrestling Woman") -- you couldn't ask for a worse combination of material. In "T.M.I." (which stands for "too much information"), Kevin sang, "I don't read reviews/Because they just give me the blues." Maybe he'd be better off taking some of the criticism to heart. -- Jeff Niesel