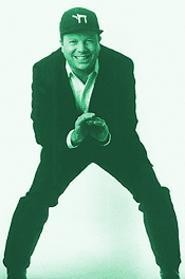 According to Avi Hoffman, anyone who has laughed at Mel Brooks or Woody Allen enjoys Jewish humor. Even Jerry Seinfeld can be seen as a continuation of the comedy that emerged from Yiddish vaudeville. But Hoffman, who will be performing Too Jewish Two at the Halle Theatre Sunday, doesn't see this as proof that the Yiddish culture of Europe that immigrated to America during the Holocaust has been saved. In fact, the cultural preservationist designed Too Jewish and Too Jewish Two specifically to maintain what he feels is a dying cultural history of European Judaism.

"The entire Holocaust experience suddenly became associated with the language and culture of Eastern Europe," explains Hoffman, who founded the National Center for Jewish Cultural Arts in Florida. "After the war, after the creation of the State of Israel, the Jewish people grasped onto Israel and the Hebrew language as a way to regain their sense of self-pride. This entire culture of Yiddish was denied."

Part of the problem may have been the distinctly Yiddish humor: a Woody Allen-like sense of comedy that is self-deprecating, not self-empowering. "Here we are, laughing at our hardships," Hoffman agrees. "We were always able to find laughter and humor in the hardship and suffering. But the great tragedy of Jewish culture in the 20th century is that, rather than being able to keep that language and the culture thriving after the Holocaust, there was this need to kind of deny it."

Yet it did take root in America, at least in some form, and Too Jewish Two recalls this history, which began in the resorts of the Catskills and came to incorporate some of the biggest names in entertainment, such as Mel Brooks, Milton Berle, and Woody Allen. "The Catskills were flourishing during [the 1940s and '50s], and nothing has ever been seen like that again," Hoffman elaborates. "This is where all the great comedians kind of got their start, and this is where I like to find inspiration for the future."

In his show, Hoffman presents Yiddish history not only in an attempt to educate, but also to spark a renaissance of Yiddish Judaism. One thing Hoffman is not concerned about is that people won't get it. "I think you reach people a lot easier when you entertain them," he says. "Everybody can laugh, and everybody laughs at what's funny. It's not the same kind of comedy that people are used to nowadays, but humor is humor. Funny is funny."