Grooving on the Grovewood

The unpretentious little tavern and wine bar is comfortably hip. 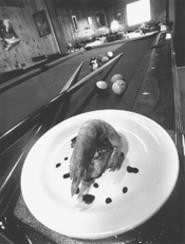 Walter Novak
A jumbo prawn holds down the table at the Grovewood.
The Grovewood Tavern and Wine Bar's transformation from a down-at-the-heels neighborhood watering hole to a modest yet sophisticated dining spot has been slow but steady over the past year.

Sure, the decor is still apt to remind you of your high-school buddy's basement apartment, with its secondhand furniture, chipboard walls, and mismatched lighting fixtures. A game room, home to a pool table and a bowling machine, opens onto the tiny dining room, and the small bar, with its jukebox full of jazz, blues, and classic rock, is only a step away. But the dining room's eight tables now boast white cloths and votive candles, the plates are classic stoneware, and service is friendly and eager to please. Throw in a selection of more than 140 knowledgeably chosen and reasonably priced wines and Executive Chef Mark Wilson's comforting Euro-American cuisine, and you've got yourself one of Cleveland's most charming casual dining spots.

Wilson is a graduate of the Culinary Institute of America in Hyde Park, New York, with credits that include stints at Ciao, Gamekeeper's Lodge, and the now-departed Sfuzzi, as well as time well-spent in upscale Boston and Colorado Springs dining rooms. Big and accessible, much like his cooking, Wilson isn't one to hide behind his pots and pans: He makes frequent forays into the dining room to bring forth toothsome little amuse bouches (miniature tartlets filled with delicacies like smoked trout, sautéed cippolini onions, and fresh asparagus tips), to check on his guests' satisfaction and to set the tone of relaxed congeniality.

The Grovewood's seasonal menu offers about a half-dozen starters, fewer than a dozen entrées, a handful of desserts, and an assortment of foreign and domestic cheeses. Flavors are bold (Wilson doesn't skimp on the garlic and fresh herbs), many of the vegetables are organically grown (he is an ardent supporter of sustainable agriculture), and portions are hearty. Besides the complimentary amuse bouche, dinners come with a basket of warm focaccia paired with a zippy mustard butter and a bowl of artisanal olive oil for dipping, and typically end with petite homemade chocolate truffles, a final gift from Wilson's kitchen. This graciousness is particularly remarkable when one considers that nothing on the menu is more than $18, and a full dinner can be had for around $20.

Wilson's homey but sophisticated style was apparent in his Wild Mushroom Pot Pie: a hearty starter of sautéed portobello and oyster mushrooms, a few strips of perfectly caramelized onion, and a sprinkling of chopped herbs piled onto a dense biscuit and sauced with a marvelous cognac cream that was spiked with lots of coarsely ground black pepper. Even simpler, yet every bit as enticing, was the Blanc de Veau: a thick, creamy veal stew ladled onto celery-studded mashed potatoes and served up in a big white bowl. Talk about comfort food -- this could easily be the mashed potatoes and gravy of the gods!

Wilson's version of rustic Tuscan White Bean Soup was also a winner, with a rich vegetable broth loaded with long-simmered cannellini beans, diced carrots, and onions. The soup got a shot of style from the addition of a few drops of homemade pear vinegar, which helped brighten its simple, earthy flavors.

The Grovewood's salad choices include a basic Tavern Salad, with plenty of fresh baby greens, toasted walnuts, and crumbs of rich, salty Gorgonzola cheese, tossed in a perfectly balanced white balsamic vinaigrette, and an unusual but tasty Calamari Salad of greens and garlicky calamari rings and bodies, in a warm olive-oil-garlic-and-white-wine dressing.

Our top pick among the entrées would probably be the juicy Pancetta Roasted Chicken Breast: a succulent boneless breast larded with a thick slice of smoky Italian bacon. The dish came with an assortment of baby patty-pan and zucchini squashes, cooked to a crisp al dente and drizzled with a buttery lemon-cream sauce, and two fat, flavorful cornmeal pancakes that were as light as spoonbread, rich as fritters, and tender as a perfect biscuit. Still, it was a close call between the chicken and the Big Pig: a butterflied 16-ounce pork chop that, the menu suggested with tongue firmly in cheek, would make "an excellent substitute for tofu." The attentively grilled super chop came bedded down on a pile of creamy mashed potatoes and sweet baby squash, and blanketed with a cumin-scented black lentil "chili" -- a combination that made for a hearty, full-bodied, and terrifically satisfying dish.

Not that our tofu lovers had any reason to complain. One night's inexpensive pasta special was a sparkling combination of firm rigatoni tossed in garlic oil with lots of freshly chopped basil, grape tomatoes, asparagus tips, and shredded Pecorino Romano cheese. And a generously sized salmon steak, served with Syrah-glazed baby potatoes in a well-seasoned lobster broth, was a delight, although we had to be on our watch for plentiful little pin bones, which our server had warned us about before we ordered.

Our only lukewarm response was to a gourmet "pizza" of grilled housemade Syrian flatbread topped with roasted and sliced Muscovy duck breast, caramelized onion, and smoked Gouda cheese. Although the crust was pleasantly sweet and chewy, and the cheese was flavorful, the plentiful duck had not been especially well-trimmed, and several of the slices were little more than fat or gristle.

Resident oenophile Lee Karr has assembled an impressive collection of wines for the Grovewood cellar, including Syrahs, Rhônes, Pinot Noirs, and Beaujolais Nouveaux among the reds, and Rieslings, Sauvignon Blancs, and Viogniers among the whites, at prices ranging from $14 to $321 per bottle. (Most choices clock in at less than $40.) We only wish Karr would include vintages and countries of origin in the wine menu listings.

Unlike many of his peers, Wilson's culinary talents extend to desserts, and some of his homemade sweeties are out of this world. Warm, made-to-order Banana Mocha Cake was an inspired combo of fresh banana-infused chocolate-and-espresso pudding-like cake with a scoop of homemade saffron ice cream that had the buttery richness of Indian kulfi. Savored together -- a bite of cake, a nibble of ice cream -- the whole took on a depth and fullness of flavor that bordered on the sinful. On the other end of the dessert spectrum -- but no less delicious -- was a fresh and fruity Chilled Orange Soup: a scoop of intensely flavored mango sorbet floating in a cold broth of orange, grapefruit, and pineapple juices that seemed perfectly suited to the sweltering summer days yet to come.

An imaginative take on that all-American comfort food, Grovewood's Milk and Cookies included a half-dozen giant homemade honeys -- three chocolate and three cherry -- on a marble lazy Susan centered by a big bowl of sweet, frothy goat's milk mousse for dipping. As with the entrées, only one dessert selection was less than praiseworthy, and that was the heavy Cointreau and saffron crème brûlée, with a thick, burnt-tasting, and nearly impenetrable lid of caramelized sugar.

Of course, not everyone is crazy about sweets. For those whose tastes are more Continental, a chunk or two of cheese with a glass of port would also make a sophisticated ending to one of Wilson's gratifying meals. We chose a generous wedge of pungent aged Stilton, accompanied by assorted wafers, to go with a glass of stunningly smooth Yalumba Clocktower Port ($2.50) and felt as smart, yet as pampered, as we could tolerate. (Other interesting cheesy choices that await our next visit include French Brie, English Cotswald, and Iowa's world-class Maytag Blue.)

In addition to good food and drink, the Grovewood is also home to live entertainment with an accent on folk, blues, and jazz each Thursday, Friday, and Saturday night. We caught a Thursday-night set by Canadian singer-songwriter Jessica Grant -- a sparkling assemblage of intelligent original songs, covering everything from love to war, that went very well with our bottle of wine and prompted my contented, if laconic, companion to observe, "You could do a lot worse than this."

Indeed you could. But with the Grovewood waiting, aren't you glad you don't have to?