Up in Smoke Tour 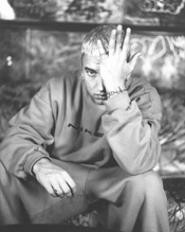 "Forgot About Dre?" Nah. But you may have forgotten about Warren G, the least significant member of this summer's Up in Smoke Tour, which has Dr. Dre at its center. Each of the featured participants -- the ubiquitous Snoop Dogg, the red-hot Eminem, and the increasingly irrelevant Ice Cube -- can trace his start to producer Dre. Most even turned up on the much-heralded Dr. Dre 2001, on which upstart Eminem showed up vets like Snoop and Smoke special guests Xzibit and Kurupt. It should come as little surprise, then, that it's the foul-mouthed white kid making the buzz for this tour. The trouble magnet's new album, The Marshall Mathers LP, is seeped in hate rhymes against gays and women. Problem is, in one of those great rock and roll dichotomies, they're laid atop some of the finest hip-hop beats of the past decade (most courtesy of Dre) and spun by the voice of one of the genre's greatest stylists. If you take his words as character set pieces (and we don't necessarily buy that theory, but it helps us get through some of the tougher rants on Marshall Mathers and its predecessor, The Slim Shady LP), there probably hasn't been a more effective album released in the new millennium.

Unfortunately, the same can't be said for Cube's latest, the lazy War & Peace: Vol. 2 (The Peace Disc). The onetime holder of the World's Greatest Rapper crown has lost the hunger (you can even see it in his eyes, in all those lame Hollywood movies he now makes). In a way, so has Dre's most successful protégé, Snoop. His new album has been delayed until fall, but chances are pretty good that, if you pick up a hip-hop album or two over the next few weeks, you'll find the drawling rapper in a featured performance.

Hopefully, given rap tours' checkered past, Up in Smoke won't follow its title too closely, and everyone will still be on board by the time it wraps up in late August.