By Keith A. Joseph 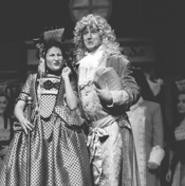 King leers: Ann Marie Wilcox and Christopher Swanson are memorably gaudy.
As 14-year-olds queue up to partake in the addictive wizardry of Harry Potter, a lesser-known but equally endearing phenomenon takes place in the rustic environs of Wooster. Merry octogenarians are heading to the College of Wooster's Freedlander Theater to genuflect to an equally addictive form of enchantment known as operetta, which has become almost as rare as vaudeville.

Instead of spells cast by adolescent wizards in training, impish sopranos and blustering tenor dragoons cast their own brand of spells with musical rapture. Vocal flights of wit and frivolity, like Potter's magic, take us to mythical lands where all emotion is expressed in romantic melody, chivalrous sentiment, and comic patter.

Those eager to pitch the joys of Northeast Ohio often gloat over our orchestra and museums, but remain mum concerning the Ohio Light Opera, the country's only full-time haven for these musical valentines that inspired our great-grandfathers to propose to our great-grandmothers. In the three summer months, Wooster miraculously pulls off seven full productions of these romantic bonbons.

So far the undisputed pleasure and surprise of the season is a resurrection of a French sensation of 1878 called Le Petit Duc. But when Charles Lecocq's operetta first hit these shores, it went over like the bubonic plague. It concerns a teenage duke (written to be sung by a woman) who infiltrates a female boarding school to reclaim his kidnapped young bride. The plot is in the mode of Shakespearean farce, set to endlessly tinkling music boxes. We wager that, even with a pistol held to the forehead and a crack at a guest shot on Who Wants to Be a Millionaire? no one in the audience, after listening to three hours of ditty flinging, would be capable of whistling one of its pleasantly anonymous melodies while leaving the theater. This may be the only operetta in history to be cherished solely for its libretto.

Credit for this fascinating anomaly goes to translator Richard Traubner, who is to operetta what Darwin was to apes: He has, according to his bio, chronicled, lived, and breathed this form of musical champagne since he first performed both parts of the "Indian Love Call" in his kindergarten recital.

In rendering this piece of esoterica into English, he has taken Henri Meilhac and Ludovic Halevy's libretto (they also did Bizet's Carmen) and expertly reinvented it in the manner of the continental musical soufflés of cinema's most sophisticated director, Ernst Lubitsch.

From the opening chorus of saucy minxes playing boys to Ann Marie Wilcox's convent school mistress -- a cross between King Kong and The Sound of Music's Mother Superior -- the evening is one long, sublime leer. Fitting in anywhere from Molière to the Marx Brothers is Christopher Swanson's schoolmaster, who is so prissy and castrated, he makes Mary and her little lamb seem like Hell's Angels.

From impetuous young duke to cockney serving girl, Nancy Marie Balach hops genders with the alacrity of an Elizabethan boy actor. The entire company sings exuberantly, like turtledoves on a lark.

In the Lubitschian manner, there is giddy perfection in the minutiae, from the absurdity of school bonnets that look like rocket launchers to Carol Hageman's dances that suggest a collusion between Bo Peep and the Marquis de Sade. Director Steven Daigle rates a lifetime supply of caviar for a production whose lascivious twinkle flickers for at least two of its three hours. We usually like our operas uncut, but in this case, the last act could have benefited from a circumspect circumcision.Porthouse Theatre's traditional production of King Henry IV Part I is a balm for decades of creepy modern-dress Shakespeare. Rich ambers and browns and underlit banners give us a Middle Ages out of Brueghel. Yet director Terry Burgler, who also plays Falstaff, has pulled off the same egotistical stunt as Orson Welles in his Chimes at Midnight, a film version of the Henry plays. He has pared it down to a pedestal for his own glorious Humpty Dumpty of a Falstaff. Unlike Welles, who cut all the non-Falstaff scenes, Burgler retains the whole play yet somehow manages to make the multitudes into a faceless blur.

Jason Marr's Prince Hal is golden and chilled. He doesn't have to learn how to be a king; he is already solidly royal by way of Machiavelli. He treats Falstaff and his compatriots like disdainful lab experiments. This interesting but wrongheaded performance murders the play's chivalrous heart.

Michael Daly's passionate Hotspur is done in by a dastardly costume that makes him appear to be a refugee from Tolkien's Lord of the Rings.

It takes a Wellesian bravado to truncate a chronicle on the birth of kingship into the travails of a lovable bad boy. However, this is not the first time Falstaff has stolen this play. It's a well-known piece of theatrical lore that good Queen Bess cherished the character's debauchery to such an extent that she ordered him up his own play.