Wooster turns a potential turkey into a bird of paradise.

By Keith A. Joseph 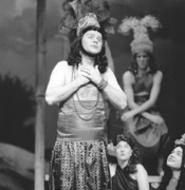 Ted Christopher takes the express lane to comic Valhalla.
Just when disenchanted Cleveland theatergoers, bored to distraction by endless Evita resurrections and Shakespeare runarounds, are about to flee to the stages of Canada, Wooster's Ohio Light Opera company once again comes to the rescue. It is offering salvation in an exquisitely packaged esoteric work.

Utopia Limited, or The Flowers of Progress, is Gilbert and Sullivan's 13th collaboration. This, their penultimate work, was lost in the shuffle between pixilated pirates and hoydenish geishas. After its disappointing initial run of 245 performances in 1893, the work wasn't seen again until 1975. By the time Victorian England's most popular songwriting team got to this work, they had been on a four-year hiatus from each other. The bloom was starting to wear off their whimsical roses. In the tradition of long-lasting partnerships, from Astaire and Rogers to Tom and Jerry, effortless genius has a time limit. It invariably fades into the melancholy strains of "It Seems to Me I've Heard That Song Before."

As set designer and author Richard Traubner wrote in Operetta: "Utopia was originally overpraised. The public, however, came to realize that the latest Savoy piece was not up to snuff. Though Gilbert's libretto was admired for its satirical barbs, strung on an interesting premise -- the conversion of a South Sea isle into a Company, Ltd., a miniature British monarchy -- pointed jokes were no substitute for a clear and interesting plot." Gilbert still managed to dazzle with his trademark sterling-silver comic patter and rhymes, yet he had lost the knack for rapier simplicity. His targets took on the breadth and complexity of a decade of Punch (England's leading humor magazine at the time). Sullivan's music still was the Empire's finest champagne, even if the bubbles seemed a bit familiar. (Utopia's best joke is a musical quote from H.M.S. Pinafore.)

Most companies would rather play it safe, depending on a handful of G&S standbys, rather than take risks on their lesser-known works. Not so the stouthearted denizens of Ohio Light Opera. Here toil the fearless purveyors of obsolescent pleasures. Like the mad scientists who populate Jurassic Park, they have perfected the formula of bringing extinct species back among the living.

Julie Wright, one of the company's most radiant songbirds, making her directing debut, shows she has brains as well as lung power. She nurses madcap lunacy with the loving care of a laughing-gassed Florence Nightingale. Wright magically coerces a gaggle of pale, hairy-chested songsters and lubricious-lipped sopranos into cavorting with joyous abandon.

Aiding and abetting this clever conspiracy of consummate conviviality is choreographer Carol Hageman, whose Agnes de Mille pantomimes and minstrel spectaculars of pontificating politicians offer the most undiluted merriment one can experience while still sane and sober. J. Lynn Thompson conducts with passion and perkiness.

If the evening doesn't literally have a Bob Hope or a Groucho Marx to lead us to comic Valhalla, Ted Christopher is the next best thing. His native monarch, gone veddy British, waving a tambourine, prancing like a satyr, bouncing his supple baritone over Gilbert's labyrinthine lyrics like a tennis pro, makes a splendid guide to the promised comic land.

To do full justice to a cast large and picturesque enough to populate a remake of The Greatest Show on Earth, we'd have to reprint the entire playbill.

Traubner creates a fruit cocktail of an island, while Shelley Alexander's peekaboo native garb knows just how to show off a performer's assets.

Gilbert and Sullivan may have left posterity a tough egg to crack, but Wooster has managed to whip up a sumptuous soufflé.

If you're a sucker for lost causes, you need to head downtown to Kennedy's Down Under in Playhouse Square to bear witness to Greg Cesear's production of Luigi Pirandello's Six Characters in Search of an Author.

Since last summer, when he tried to claim a place for Emily Dickinson among downtown's summer entertainments, Cesear has taken on the persona of our town's Don Quixote, a knight-errant on the make, attempting to produce culture on a postage-stamp-size cabaret stage.

Six Characters is a fierce patriarch of expressionism, where six crazed phantoms, claiming they are the incomplete, unused creations of an author's imagination, hold an acting troupe hostage and torture them with their life stories.

This is one of those works used in college courses to separate theater majors from the chaff. It calls on the resources of a Shaw festival to produce and the threats of a college professor to supply an audience. Cesear's company has the resources of an economized You're a Good Man, Charlie Brown. Only two performers survive the director's valiant but mad joust with windmills. A beloved pro named Dawn Pierce attempts to keep the evening in the realm of sanity as the Oscar Madison-like director, and a breathtaking newcomer, Kristie J. Lang, manages to breathe fire and ice, even through her Marcel Marceau makeup.