After an unceremonious exit from the spotlight, Rudy Ray Moore -- the man behind Dolemite -- gets his due. 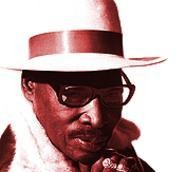 Rudy Ray Moore: international man of comedy.
In the wildly fantastic opening scene of the 1976 film The Human Tornado (Dolemite 2), a large, completely naked man rolls down an embankment. The scene ends when the man reaches bottom and stops, but it rewinds for a slow motion "instant replay," allowing the viewer to see it one more time. Of course, this is one of the near-classic and semi-legendary '70s Dolemite "B"-action films, and the figure in part of the scene is quite obviously an undeceiving double. But in the rest, it's Dolemite -- Rudy Ray Moore in all his bare glory.

Although playing the mid-'70s low-budget action character Dolemite became Moore's most well-known role (so much so that he's often referred to and refers to himself as Dolemite in casual conversation), Moore has had an amazing career that hints at an alternative cultural universe whose history has been left mostly undocumented. Throughout his 60-year career, Moore has worked the underground entertainment circuits as a comedian, dancer, early rock and roll pioneer and jump blues singer, and low-budget movie producer and star. Moore has been an entertainer in many capacities, yet to most people he'll always be, quite simply, Dolemite.

Then again, being remembered as Dolemite doesn't bother Moore. In fact, he embraces it. And why not? When you've lived the life of a hardworking and sometimes pioneering entertainer for so long without even the mildest sort of acclaim, that would seem appropriate -- if only for simple longevity. But Dolemite began long before the character was immortalized on celluloid. And if Rudy Ray Moore and Dolemite are one and the same, you have to dig deeper to figure out just where the convergence began.

"Dolemite represented a form of entertainment for a starved audience who had been used to somewhat slightly Uncle Tom style of black actor," Moore explains. "Black audiences just weren't in tune with seeing that anymore. So I turned it around. The dominant role was a black man who wasn't down on his knees."

Moore was born in Fort Smith, Arkansas (the year is unknown, and Moore won't reveal his age), and the story of his youth is typical for the times and region. It's largely unremarkable up to the point where, at roughly age 15, Moore moved to Cleveland with a relative. It was in Cleveland during the '40s that the entertainment bug bit Moore. He recalls an amateur night contest at a place he remembers as "The Old Circle Theater." There, Moore was overcome with the desire to perform.

Moore began investing his time in dance lessons and very quickly took a role in an African dance act in which he portrayed a turban-donned shuffler called Prince Dumarr. The routines were successful draws, and the performance connected Moore with local promoter Neil Stepp and his traveling Revue. Based out of Cleveland, Stepp's Revue featured dancers, blues singers, and comedians who barnstormed through towns like Akron, Youngstown, and Pittsburgh. In the Revue, Moore became exposed to all the various forms of entertainment and, perhaps most fatefully, discovered the art of comedy.

But stand-up routines would have to wait. Moore initially became a singer, and around 1946, Moore recalls, he was asked to do some singing in addition to his dance routines, so he did. At first, ballads were his specialty; popular love songs done in wildly dramatic renderings and with uncanny energy. His verve and excitability soon found a home with the emergence of early rock and roll or, as it was sometimes called, jump blues. The great rock and roll pioneer Louis Jordan was gaining national popularity with tunes such as "Saturday Night Fish Fry" and "Choo Choo Ch'Boogie," and Moore felt a kinship to the manic dynamism and inherent showmanship of such sounds.

"I started singing in Cleveland and then went out to Los Angeles and recorded some [songs]," Moore remembers. "I came back home and had records out on Cincinnati King Records, but my music stood in the background to Pat Boone, Bill Haley & the Comets, and others like that, so my singing career went down the drain."

Yet, in reality, it was a fruitful and stunningly productive career. Throughout the '50s, Moore focused on singing while slowly working comedy into his repertoire. He cut dozens of singles for a variety of labels that ran the gamut from brooding love songs to frantic rock and roll. Even more remarkable is that, in an era of professional songwriters (who usually would do all of the songwriting for performers), Moore's signature is on a good majority of the songs he did. But all of this seemed to have slipped through the cracks of history -- until recently.

In the '50s, Moore joined the army "not because I had to, but because I wanted to," but while serving in Kentucky, Korea, and Germany, he continued to entertain. He'd do shows for his fellow soldiers that featured himself wearing a turban and singing and dancing, and people dubbed him the "Turban-Headed Prince of the Blues." It was while working as the MC that Moore took his first real steps toward becoming a comic.

"My comedy career started while I was in the service," recalls Moore. "I would be onstage, and an act would be taking too much time to get ready, so the audience would say, 'C'mon, do something. Tell a joke or something.' I'd seen this woman back in Cleveland, her name was Caldonia. Stella Caldonia Young was an old show business legend at the time, and I'd seen her act because I had worked with her so many times -- so I'd just start doing her stuff. It went over so well that I just kept doing it. It's history. From then on, I've been doing comedy."

Moore continued his singing pursuits after his discharge from the army well into the late '60s. Mixing a bit of comedy now into his mostly rock-and-roll-oriented singing performances, Moore kept his career going, but it wasn't long until comedy became his obvious route to success.

"I couldn't get my singing career to take off after much work," Moore says. "So, when I found the right material, I stuck with comedy and wound up with a hit record. Naturally, I then became a 'feature' comic."

It was the early '70s, and Moore was working in a Los Angeles record store when Rico, a toothless vagrant who was looking for money, came stumbling into the store. Moore would tell Rico to "do something" to earn the money, and Rico would go on and on with a rant about a mythical character called Dolemite. With the other customers falling over laughing, Moore adopted the bit and caught lightning in a bottle.

The Dolemite rap became the centerpiece of Moore's seminal "party" record -- Eat Out More Often. Done in rhyming toasts and loaded with racy jokes, Eat became a hit and even made it onto the Top 40 charts. Moore followed up the success with another album of X-rated material called This Pussy Belongs to Me. This Pussy was another winner, and it left Moore with the welcomed appellation of "King of the Party Record." With the success of his comedy records, Moore found himself with cash in hand and ambition unbridled. The consummate entertainer was ready to expand his repertoire, and film seemed the logical choice.

Taking his cues from the explosion of early '70s black action films (often referred to as "blaxploitation" films, a term that Moore finds completely loathsome), Moore thought it prudent to take advantage of the opportunity and the medium and bring his stage and party record characters to life. Filmed entirely with Moore's own capital and with the assistance of his friends and associates, Dolemite was released in 1974 to surprisingly good response. The film itself was an obvious low-budget effort that presented a kung-fu-fighting ex-con called Dolemite, who had been released early from prison in order to go back home to "clean up" the old neighborhood (assisted by a ring of kung-fu-trained call girls). A weird and wild comic-book-like film, Dolemite is unexpectedly cohesive and coherent. It's a violent, racy, foul, and mostly very funny motion picture that, despite the poor production, is engaging throughout. And Moore comes across as larger than life onscreen while delivering a jagged but powerful performance.

All in all, the film stood as a success. The reaction that Dolemite provoked, and the fact that it -- astonishingly enough -- turned a profit, convinced Moore he was onto something. More films quickly followed, all in the same tradition of Dolemite -- all were done with Moore's money, and he was the star. The string of minor successes was finally broken when the film production company behind the movies went bankrupt and left Moore, who had always used his own money to make the pictures, nearly broke himself.

Moore moved on, but his star power began to fade. Throughout the late '70s and early '80s, he returned to the stage as a comedian and singer, working small venues whenever he could get a gig. It was beginning to seem as though history had forgotten the man who had turned telling dirty jokes into an art form. That is, until rap music came about.

In 1986 Luther Campbell and 2 Live Crew referenced and sampled one of Moore's earlier party records. Moore became a full-blown cult hero in rap circles and connected with a new and younger audience, as rappers sampled his early work, and he made appearances with an ever-growing array of rap artists.

"The young people come to see me in droves," he says, "because I have appeared with Dr. Dre, with Snoop Doggy Dogg on his latest album, Busta Rhymes on the album before the one he has now, Big Daddy Kane on an album, and Eazy E. I have appeared with all of these rappers, and 'The Godfather of Rap' is what they call me. This is how I have picked up a new young audience."

And Moore's resurgence continues. Aside from the rap projects, Moore is enjoying the revival of his singing career and a renewed interest in the films he made.

"My films are still selling today," he says. "I never thought they'd live past the theater runs -- I thought that would be it for them. Back then, they did not have videocassettes, but when video came out, it made these old films live again. My films are even on DVD now and are coming out in a box set soon."

Moreover, the renewed interest in Moore's prolific, historic career has brought Dolemite back to the big screen. The Return of Dolemite: 2001 has finished shooting and is "in the laboratory," as Moore puts it.

"I figured it was time for me to make Dolemite stand out one more time," he proudly explains. "This one is going to be hard-hitting. I am again the executive producer and had to make the film myself, so I made it very hard-hitting, so it will stand out as something that is daring and bold. I come out as I am. I come out with the strong language, with the ass-kicking fight scenes, and the torrid sex scenes. I didn't have big-budget studio money, so I had to make it as shocking, bold, and daring as I could."

For anyone remotely familiar with Moore's earlier efforts, this promise to be "shocking, bold, and daring" portends another extraordinarily unique film. But in the meantime, Moore continues to work as a live performer. He keeps up a lively schedule of shows and appearances, and is currently doing a show that features singing, dancing, and dirty-joke telling. All things considered, Moore is more accurate than crazy these days when he describes himself as "the versatile entertainer of international fame -- singer, dancer, comedian, actor, and rapper, the overall performer."