A taste of the Mediterranean in the Warehouse District 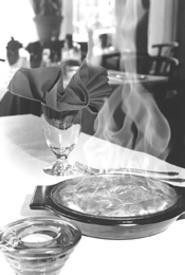 Walter Novak
Flaming saganaki kindles appetites at the Greek Isles.
There's nothing like a good flaming cheese to set the appetite on fire. At least that was the consensus after a recent dinner at the Greek Isles, a friendly, fairly priced Mediterranean restaurant that has become a cornerstone of the bustling downtown Warehouse District over the past seven years.

The signature starter, saganaki, proved to be one of our favorites among an assortment of mostly wonderful authentic dishes on the restaurant's large menu. Simple in preparation, but dramatic in its presentation, the dish is nothing more nor less than a thick slice of firm white Kasseri, sautéed in butter until crisp and creamy, then flambéed, tableside, in brandy and extinguished with a few squeezes of fresh lemon. Reminiscent of a perfect grilled cheese sandwich without the bread, the taste of butter, salt, and cheese combined with a hint of fruitiness to make as unpretentiously delicious a tidbit as any diner could hope for. Cries of "Opa!" (a traditional Greek exclamation of pleasure) ran through the dining room all evening, as platters of saganaki burst into flames around us -- a bit of theatricality that became even more entertaining as the empty bottles of good Greek wine began to pile up.

(Although some still contend that the phrase "good Greek wine" is oxymoronic, winemaking throughout the country has improved considerably. No longer is pine-pitch-infused retsina the standard. Instead, the Greek government has classified the native wines into 28 "controlled appellation" regions, and as a result, the number of well-crafted Greek vintages is at an all-time high. The Greek Isles wine list includes a number of these moderately priced bottles, including Santorini, a well-rounded white table wine from the respected producer Boutari, which our waiter knowledgeably recommended. Not surprisingly, the wine's bright highlights made a great match to the food's lemon-and-herb flavor notes.)

Besides the saganaki, we indulged ourselves in a platter of vegetarian dolmathes: supple grape leaves wrapped around a meatless filling of rice, dill, mint, and finely ground celery; a simple cheese plate of sharp but creamy feta surrounded by kalamata olives; and the peppermint-pink taramosalata, a subtly flavored mash of potatoes, lemon juice, herbs, and a bit of red caviar, accompanied by several plump "loaves" of tender pita. A basket of warm, crusty bread, along with crumbled feta and olive oil for dipping, had appeared soon after we took our seats, and together with the appetizers, it added up to a spread that could have been all any group of sensible folks would have needed for a light, rustic dinner. It also would have been the perfect accompaniment to an evening of first-class people-watching from one of the restaurant's handful of small sidewalk perches, we realized as we sat at our own spacious table in one of the three high-ceilinged dining rooms.

Not that the interior wasn't nearly as refreshing as a breath of cool air, with its cobalt-and-white decor serving as backdrop for an assortment of green plants and Greek objets d'art that ranged from curvaceous stringed instruments to massive pottery urns to traditional garments mounted under glass. The pretty tables were doubly draped in blue and white linens and topped with fistfuls of flowers, white votives in sturdy glass holders, and salt and pepper shakers (which we hardly needed, so tasty was most of the food). As for the service, it was generally well-paced and unobtrusive, although we wouldn't have minded having our dirty dishes removed more promptly and the table crumbed before dessert was served.

As is the case at most Mediterranean tables, vegetarians can do quite well for themselves at the Greek Isles. Besides the large array of dishes that are meat-free by design, including salads, soups, and appetizers, several savory entrées can be had in either meatless or meat-based versions. For example, we didn't miss the ground beef one whit in an order of vegetarian moussaka: a hearty portion of layered eggplant, zucchini, and potatoes, topped with an astonishingly thick layer of creamy béchamel and finished with a light tomato sauce.

Spinach-stuffed vegetarian spanakotyropita was also robust enough to satisfy any carnivore, with layers of fragile phyllo hugging a rich feta, spinach, and egg filling. In fact, in comparison, a platter of sliced, roasted leg of lamb looked almost ghoulish: While the intensely flavored meat was fork-tender and moist, and rested in a killer garlic-and-oregano-scented jus, there was enough fat and gristle attached to make the dish a little less than perfectly appealing.

Shrimp Mikrolimano, a casserole of baked shrimp, vegetables, and feta, was also a mixed bag. The veggies -- thinly sliced onion, pepper, and tomato soaking up the essences of melting cheese, garlic, and Greek oregano -- were just barely crunchy and full of goodness. But the shrimp -- six small tail-on numbers -- were disappointingly bland and dry. (The menu description called for jumbo Gulf shrimp, and had the kitchen used them instead of their small-fry cousins, the dish might have turned out better.)

But we give the staff lots of credit for the very good side dishes that accompanied the entrées. No second thoughts here. Everything, from the outstanding Greek salad (mixed greens, cucumber, tomato, red onion, and feta tossed in an unusually well-balanced olive-oil vinaigrette) to the tangy lemon-drenched, herb-roasted potatoes to the perfectly prepared rice topped with a spoonful of rich cinnamon-infused tomato sauce to the horta (tender baked green beans kissed with olive oil, onion, celery, tomato, and dill), was delectable and demonstrated as much attention to detail as any of the main events.

The well-organized menu includes a few all-American dishes like grilled salmon and filet mignon with sautéed mushrooms, apparently designed to appeal to the most cautious diners. But even the more exotic-sounding items, like avgolemono (chicken and rice soup flavored with egg and lemon) and ortykia (charcoal-grilled quail) are clearly described so diners can order with a reasonable degree of confidence. Owner George Servetas, who takes an active role in the kitchen, has also recently hired a new chef, Avoun Wells; expect Wells to begin broadening the restaurant's selection of non-Greek Mediterranean dishes and specials.

We capped off our meal with demitasses of thick, sweetened Greek coffee and a sampling of homemade desserts. A generous portion of warm, chewy baklava was scrumptious, with layers of phyllo interspersed with chopped nuts in a light honey/sugar syrup. Even better was the warm galaktoboureko, a sort of crisp phyllo turnover, filled with firm, dense custard and drizzled with more sweet syrup. And a bowl of rizogalo, a luscious rice pudding topped with a mound of real whipped cream, was a little taste of heaven.

Fitting, isn't it, that a meal beginning with a cheese flambé should conclude with the warmth of such sweet goodness?