Datach'i and Kid 606 take alternate routes with their electronic music. 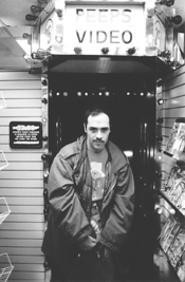 Kid 606: He's down with the scene.
It would be easy to assume that, since Datach'i (Joseph Fraoli) grew up in the wealthy New York suburb of Westchester, he's just another rich kid with a sampler and too much time on his hands. But Datach'i, whose second album, We Are Always Well Thank You, has the kind of experimental electronic beats normally associated with Aphex Twin, Bogdan Raczynski, and other artists from the U.K., maintains that living in Westchester wasn't all wine and roses.

"It's known for [its wealth], but there's other parts to it," Fraoli, 23, says via phone from his Brooklyn home while munching on a bagel chip. "I lived next to the prison, the one where Amy Fisher was. Right down the road was a mental institution. I used to get pissed off, because people would walk through our parking lot to get to the prison, and somebody left the door open, and they stole my bicycle. It's weird, because we lived in this remote, nice area, but there'd be these planned car thefts, and five cars would get stolen in one night, because I think people come up from the ghetto to visit their people in prison."

Initially, Fraoli channeled that anger and frustration in a number of different directions. He played guitar with a garage-rock group, bass with a "skinhead reggae band," and "all sorts of other shit." But when he happened upon a keyboard at a friend's studio, he knew he had found his instrument of choice.

"I saw a keyboard that looked so cool, I convinced my friend to let me borrow it, and I brought it home and just started messing with it," Fraoli recalls. "I wouldn't give it back to him, because I was totally obsessed with it. I still owe him money for it, and that was five or six years ago."

Coining the moniker Datach'i to convey the concepts of "information and energy," Fraoli released his first album, 10110101 (rec+play), in 1999. Titled after the codes for record and play on his Panasonic DAT machine, 10110101 (rec+play) became part of a burgeoning subset of electronic music called drill 'n' bass, a variation of drum 'n' bass that's characterized by whining synthesizer noises as much as by heavy percussion.

"I wrote [10110101 (rec+play)] when I was experimenting with all this stuff," Fraoli says. "It's all different kinds of tracks that aren't really meant to have any continuity. They do, but I was just fucking around with a lot of different stuff. It's a little more on the experimental tip than my new record. I wrote the second record in a short period of time, and it's more melodic."

On We Are Always Well, everything from the static-filled drum 'n' bass beats of "Merrily We Roll Along" to the popping synthesizers of "Falp (318)+15 Degrees" has a playful, whimsical feel to it. It sounds as if Fraoli took music-box melodies and paired them with electronic beats. In fact, when it comes to thinking of song titles, Fraoli finds that everyday experiences -- no matter how surreal -- can be inspiring.

"I took my cat to the vet, and I was really delirious, because it was early in the morning," he says when asked about the origins of "Animals Coming Home Are Excited." "I was staring at the bulletin board, trying to figure out what this sign said -- you know, the one where they put the white letters up on the black board -- and it said 'Animals coming home are excited. Give them food and water within six hours.' I was like 'What the fuck?' The sign stuck in my head, and I wrote that song about my cat."

The final four tracks on We Are Always Well all share the same name -- "What It Is." They seamlessly merge into one another -- even the final version, which is dubbed the "leonard park stic" and comes from a four-track demo that Fraoli recorded for 10110101 (rec+play) with his brother Michael, a cellist who also conducts various orchestras in the suburban New York area. "I think he rubs off on me way more than I rub off on him," Fraoli says.

Fraoli's current tour is his first national one and has him paired with San Francisco's Kid 606 and Germany's Pluramon. Like Datach'i, both Kid 606 (Michael Depedro) and Pluramon (Markus Schmickler) are experimental artists whose electronic music is boundary-breaking. And like their albums, their live shows are completely unpredictable. When Depedro last played here -- at Peabody's in December as the opener for Fantomas, a group fronted by former Faith No More singer Mike Patton -- he was greeted with jeers and boos. One fan yelled, "Hey, Kid Microsoft, get off the stage, let the real bands play" -- an insult that Depedro still recalls.

"It was hilarious, because I guess some really homely local wannabe Faith No More-type band was promised that they could be on the bill and presold like 100 tickets to their friends and family and shit," Depedro, 21, says in an e-mail exchange. "Yet Mike Patton has an incredibly strict rule about not letting anyone else play on the bill, so the club had to deal with this band being all disappointed and just wanting to 'meet' Mike Patton (their hero). Anyway, all their bros at the show wanted to kill me, because I kept the local yokels from playing with the mighty Fantomas, but it turned out being a really good, nasty, tough musical night that didn't sound too bad, and I met a lot of cool people who really liked the show and weren't expecting to see something like me at a rock show."

On Down With the Scene, an album he released earlier this year on Patton's label Ipecac, Depedro fluctuates between speaker-melting drum 'n' bass ("Chart Topping Radio Hit") and fractured R&B ("Secrets 4 Sale") before concluding with a stuttering remix of several tracks on the record. Even the most tepid songs are laced with screeching electronic noises and echoing voices, sampled from a variety of sources.

"I think I am the only person that finds so little connection between my music and jungle/drum 'n' bass or this so-called drill 'n' bass," Depedro explains. "I have a strong noise influence, but it's not something I feel too close to anymore."

Erratic though their work might be, both Fraoli and Depedro are extremely prolific, recording and remixing numerous tracks each year. Depedro admits he's often so busy that he doesn't know what to prioritize -- "My main problem is putting too much time and energy into something which, as a whole, doesn't really mean much."

Live shows represent the opportunity for both artists to experiment even further. "I wanna incorporate some new stuff that's not out yet," says Fraoli, who has just released a remix EP called "This Is My EP" that features two new songs of his and remixes by Mogwai, Kid 606, and Bogdan Raczynski. "Ideally, I would like to play all new stuff, because once the record comes out, I want to move forward."

Fraoli says he has already started thinking about his third record, and this year alone, Kid 606 has issued a bootleg remix of NWA's "Straight Outta Compton" in addition to two studio albums. Fraoli tends to work quickly, but says he has actually started to record at a slower pace.

"I've tried to get out of that habit," he says. "I was bad a year ago. I couldn't do anything unless I wrote at least one track a day. My whole mentality got screwed up, and I would get tweaked out and shit. I have personally reformulated my writing style so I could progress musically. Mentally, you have to grow. I could write three songs a day for the rest of my life, you know what I mean? It's frustrating, because you get stuck in routines, and I want to keep things special -- make a full, solid record that's different instead of doing the same shit constantly."