Nina Gordon takes her first solo steps, with an occasional nod to her Veruca Salt days. 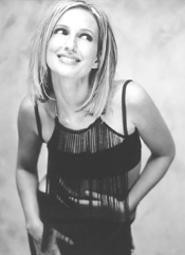 No longer with Veruca Salt, Nina Gordon still plays "Seether."
Nina Gordon is holed up in her hotel room in Oakland on the third week of her tour. Her cell phone rings insistently throughout our conversation -- an example of the demand that Gordon has experienced since the release of her first solo album, Tonight and the Rest of My Life.

To say that Gordon has had a tumultuous couple of years would be understating the obvious. When she resigned her position with Veruca Salt in early 1998, drummer Jim Shapiro had already given his notice, but his replacement, Stacy Jones, followed Gordon out of the band as well (she drums on Tonight). Louise Post eventually assembled a new quartet under the Veruca Salt banner, and Gordon began working on the material that would become her solo debut. Their respective albums came out a month apart last spring, Gordon's in April and Post's refurbished Salt in May.

As it turned out, the former bandmates had one last bond to share: label difficulties. The contract Gordon and Post had signed with Geffen for Veruca Salt was still in effect when the events of '98 began playing out. As Post rebuilt Veruca Salt and Gordon began her solo songwriting in earnest, corporate machinations were under way that would threaten both of them.

"There was probably a six- to eight-month period where I was just really focused on writing these songs, working on them, rearranging them," says Gordon of the material that constitutes Tonight. "I was writing, writing, writing, up in my bedroom in Chicago in the middle of winter. It was a really strange time for me. A lot was going on."

After finishing a batch of songs, Gordon headed for Boston to record demos of the material, which she then reviewed with producer Bob Rock, who had recorded the last Veruca Salt album, Eight Arms to Hold You. In November '98, Gordon returned to Rock's Hawaiian studio -- this time as a solo artist with the intention of coming home with a new album for her label.

"I made the album for Geffen," she says. "When I chose to leave Veruca Salt, they chose to continue to put out my records, so we worked on this album together. I worked with my A&R person from Outpost, who was working with all of the Geffen people. About a month before we were finished, there was this whole shakeup in the industry, and Geffen was no longer what Geffen was, and all the people that I had been working with were gone -- either they jumped ship or were fired. I got really anxious about that and started doing some investigating and figuring out whether I could jump ship myself. It turned out that Warner Brothers was willing to buy me out of my contract."

The PolyGram merger began in early '99, and it was a tense year before Gordon's status was finally cemented and her phenomenal album hit the racks. She readily admits that it was a dicey time, with the distinct possibility that Tonight and the Rest of My Life could have become one of the great lost albums whose existence is whispered about for years.

"I had to wait quite a long time for this to see the light of day," says Gordon of the album's shift from Geffen to Warner. "It was really frustrating."

Perhaps the frustration of having to wait for the industry bubble to recenter was made more anxious by the comparatively relaxed seven months that Gordon and her new bandmates spent with Rock in Maui assembling the new album -- anything would seem frustrating by that yardstick. Ironically, the die was cast for Gordon's solo album way back in '96, when Veruca Salt enlisted Rock to produce Eight Arms to Hold You.

"He had such great experience, and I particularly just really connected with Bob musically," Gordon says. "He and I acknowledged to each other that it would be great to work on a record where we just looked at each song individually and figured out what each one needed. A solo record by its nature is a lot more limitless. When you're in a band, there's this structure -- two guitar players, a bass player, a drummer, two singers who want to sing all the time. You know how you're going to arrange every song."

Even with the agreement to work together, Gordon never expected to be taking the solo route less than two years after the hypothetical pairing was proposed between her and Rock.

"I certainly didn't think that I would be there as soon as I was," says Gordon. "On some level, I suppose that I wondered what it would be like to be on my own, to make a record without my band, and to feel a little more free."

Given that freedom, Gordon crafted an amazingly catchy pop album, fashioned just as she had envisioned with Rock, with each song standing easily on its own, but also standing together effectively as a unit. Rock's input was a big part of that sonic blueprint, as was that of pop genius Jon Brion, whose work with Aimee Mann had impressed Gordon enough to make her contact him. His pop fingerprints are all over Tonight, and Gordon says she was thrilled with his presence and his expertise. While there are discernible differences between Gordon's work now and Veruca Salt's work then, Gordon insists that the shift from then to now was subtle enough to be nearly nonexistent.

"On any given day, I could write any kind of song," she says. "In the end, when it came time to choose the songs that I wanted to put on this album, I chose the 13 songs that are there, and those are the ones that I'm most proud of. There are many other songs that I didn't put on the album that are much more like what I was doing with Veruca Salt. There was no preconceived plan about what kind of record I wanted to make. I looked at every song and said, 'Okay, this is a song I want to be playing for the next two years on stage, and this is a song I might get sick of.' It just kind of happened. I didn't even realize how different this record was going to be perceived until I started doing interviews."

With Gordon's tour now three weeks old, she's had some time not only to live with the stage presentation of the songs on Tonight, but also to digest some of the feedback gleaned from the audiences and revisit some of the songs that didn't make the album's final cut. All of this reflection has resulted in a varied set list, including the crowd-pleasing "Seether" and "Volcano Girls" from the Veruca Salt period.

"When you start touring and playing the songs every night, you realize what songs are really exciting to play and which songs you have passion for," says Gordon. "There are certain songs that I didn't put on the album that I've been thinking about recently and thinking how great it would be to play them, so there are at least a couple I could see resurrecting."

Resurrection seems to be an important concept in Gordon's career to date. She resurrected Veruca Salt's image, when it was being assailed from every direction, by writing its two signature songs. She resurrected herself from the doldrums of working within the confines of a band structure. And she resurrected Tonight and the Rest of My Life from almost certain obscurity as a dust-collecting bookend in some vault. That ability to resuscitate and sustain may prove to be Gordon's greatest gift as her career develops and grows.