Soundbites gets down with the Clowns backstage at the Agora. 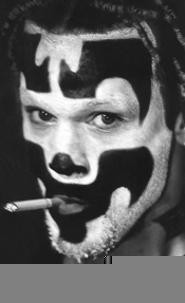 Walter Novak
Shaggy 2 Dope of Insane Clown Posse, the most hated band in the world.
Oblivious to the deafening "ICP" chants echoing through the Agora, Violent J and Shaggy 2 Dope, the two rappers who make up the Insane Clown Posse, are relaxing in their backstage dressing room. They've been at the venue all week, rehearsing for a 10-city December tour. The November 28 date here was added at the last minute, and because of the timing, the Agora wasn't able to advertise the show in local papers. In fact, the demonic duo booked the gig as a warm-up for the rest of the tour, tentatively scheduled to continue next year with dates with Nashville Pussy, Confrontation Camp, and Suicidal Tendencies. Sold for a mere two dollars, tickets have gone fast, as word of the concert spread on the band's website.

"We're doing so much new stuff on dis tour, we wanted to try it in a town dat is very familiar to us," Violent J explains in his best Ebonics. "So they can let us know if it sucked or not, ya know what I'm sayin'? We got a new band out wid us. We're gonna find out what songs go over really good and what songs don't. Tings like dat. Cleveland knows us really well. We've been playin' here for years and years and years."

The short notice hasn't stopped the Juggalos (the name for the Posse's rabid fans) -- nearly 1,400 of them -- from showing up, armed with bottles of Faygo soda and with their faces painted in the same black-and-white clown patterns as their heroes. The ICP phenomenon is a strange and perverse one that can't simply be explained as part of Detroit's white rap revival.

Initially a rap outfit called the Inner City Posse, ICP altered its name to the Insane Clown Posse after a lineup change in 1991 that left Violent J and Shaggy 2 Dope as the two sole members. They started their own label, Psychopathic Records, and quickly became so notorious that Hollywood Records signed them and planned to release 1997's The Great Milenko until it was pulled because of its obscene lyrics, which made references to incest, drug use, and violence. Island Records picked up the band and has put out its subsequent releases, including the recent Bizaar/Bizzar, two separate albums that debuted high on the charts. Despite the band's utter lack of musical talent -- Violent J and Shaggy 2 Dope can't flow for shit, and the beats are a stale imitation of old-school gangsta rap -- the band's fan base remains devoted.

"What we say, dey relate to right off da bat," explains Violent J, his denim jacket and shorts accented with a pair of crisp Air Jordans that will undoubtedly be ruined by the time the show's over and gallons of Faygo (which the band sprays relentlessly on the crowd) have been dumped on them. "You can have an entire song full of lyrics about killin' and murderin' and stabbin', but there'll be one lyric dat's real and dat they can really relate to and dat lets dem know what kind of person we really are."

A savvy merchandising campaign has undoubtedly helped keep ICP fever steady. While sales appear slow at the Agora, the merch guy says that product moves faster on the website, where Juggalos don't think twice about using their parents' credit cards for $450 leather jackets and $100 hockey jerseys. In a particularly brilliant move, the band released Bizaar and Bizzar with 3-D covers, ensuring that downloading the music on Napster wasn't going to give you the real deal.

While most major music publications don't take the group seriously, one that does is Cleveland-based Alternative Press. ICP is on four different covers of AP's latest issue and has actually been on the cover of the magazine numerous times in the past. So how is it that a group with so little artistic merit can find support from editors who gravitate mostly toward underground industrial, electronica, and indie rock?

"They are the scrub rap [version of] Fugazi in that they're not loved by MTV or by a lot of the major outlets," explains AP Senior Editor Jason Pettigrew, who wrote the current cover story. "I compare them to characters in a Horatio Alger story, because they have a very strong Midwest work ethic. They're kind of punk rock in that they do what they want to. They don't make Cash Money-style records, and they don't make records that are considered by the mainstream as really good hip-hop records. I think that, because they defy that, they've tapped into a consciousness in society. Let's face it, a lot of their fans are disenfranchised, and they think life sucks. Isn't that the way any interesting art movement happens?

"I'm not going to tell you that Bizaar/Bizzar is better than [Fugazi's] Repeater. But I do contend that what they do is very special to the people they speak to. To some kid who doesn't know how to spell GED, is living on government cheese, and hanging out at the Dairy Mart, calling his buddy Tim Smith his nigger -- it connects to them. I'm not even sure how."

And neither are we.