It's wall-to-wall waltz this week at Grays Armory. 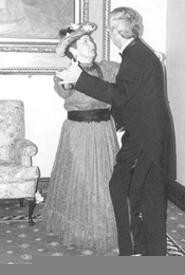 Waltzers Rosalie and Tom Wurz show how it used to be.
Weekend time-travelers with a taste for romance typically gravitate toward some work of fiction to sate their historic sweet tooth: a swashbuckling pirate novel, or a TV series about rich people who drink champagne toasts and talk to teddy bears in between fox hunts on distant parts of the estate. Those who settle for fiction, however, are mere spectators dabbling in virtual antiquity.

Dancers at Apollo's Fire's First Waltz do them one better: They step into the past and live it for one glorious, dizzying, and extremely well-mannered evening each year. Apollo's Fire is Cleveland's baroque orchestra, performing music 200 and more years old on instruments just like the ones used when the tunes were new. First Waltz is the band's annual black-tie benefit that celebrates the new year with a grand ball in the slightly more recent Viennese style of the 19th century. That means the music is almost strictly Strauss.

"I compare it to being in a Merchant Ivory film," says benefit committee member Karry Hatch. "Last year, at the English Oak Room under dim light, with the women in waltz gowns and gentlemen in tuxedos, I really felt like I stepped back in time."

Cathy Stephens, the dance mistress for the evening, comes from Ontario to teach the movements and manners, and to lead the guests through their paces. The old Viennese dance style is not to be found in the average 21st-century ballroom. "It's turning constantly. That's something to get used to. I teach all these nice variations you can do in promenade position to keep you from getting dizzy."

In the Viennese waltzing heyday, a dance would string several tunes together and go on for a quarter of an hour or more. Unlike contemporary ballroom dance, which follows a strict tempo, musical speed in the historic style changes according to the composer's directions in the score. Only the most advanced dancers know what to do in a tempo or tune change. Fortunately, Stephens offers workshops the night and day before the ball.

A dance historian and teacher for 17 years, Stephens says she has been dancing since she was a child, beginning with ballet and tap. She got hooked on historic waltz while attending a folk-dance seminar. Now she studies dance manuals written hundreds of years ago to help middle-class folks learn the steps that would give them a foothold in society. "They say things like 'start with the right foot, glide, bring feet together, leap forward.' But you have to cross-reference to make sure the guide isn't just telling a tale."

Increasingly elaborate clothing has added to the historic spectacle. "I always come in period reproduction costume," Stephens says. "When it started out, the men came in tuxes and the ladies in very nice evening dress. Over the years, more and more men have been coming in tails or vests, and women's dresses have gotten more elaborate in the Victorian style. And of course, everyone tries to outdo each other with outfits."