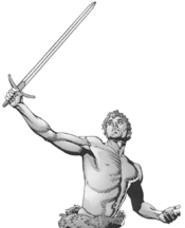 Comic book artist and Kent resident P. Craig Russell is always looking for a good story to tell. For the last 25 years, that search has landed him far from Gotham City and into the hyper-emotional world of opera.

Next month Dark Horse Comics releases the latest chapter in Russell's mammoth retelling of Richard Wagner's opera cycle, The Ring of the Nibelung, though the company is careful about passing it off as such. "I think the publisher wants to avoid the 'O' word, because the comic fan would think this is an attempt to educate," Russell says. "That's not what this is about."

It just so happens that the same opera that gave us the image of a fat lady in a Viking helmet, and Elmer Fudd a tune for his "Kill da wabbit! Kill da wabbit!" mantra, is also great stuff for comic books. The tale begins when Alberich, a lowly gnome, steals the Rhine gold from under the watchful eyes of three river-dwelling sister goddesses. When Alberich forges the gold into a ring that gives its owner ultimate power, he sets in motion deceptions and battles that will bring about the downfall of the gods. Not even Superman wields such power.

Russell has been drawing since his childhood in East Liverpool, Ohio. At the University of Cincinnati, he studied abstract expressionism, but was on his own to learn about such practical matters as drawing the human form. In the early '70s, he moved to New York City and got his start inking Marvel comics for cash.

Opera, however, always beckoned with epics of murder, magic, and sex. The Ring cycle, with its complex relationships and mythological subject matter, caught his eye first, but he decided to mature as an artist before taking on such a daunting task. "I had to work up to it, because it is so enormous and has so many characters," he says, adding that a DC Comics version of The Ring released a few years ago proves his point by being too cartoonish and "kind of shallow."

"I wanted it to be as good as I could make it," he explains. "I felt that I had so much more to learn." So he set about adapting Wagner's Parsifal, Mozart's The Magic Flute, and several other works before he decided he was ready for The Ring.

A quarter-century later, his work is nearly complete. The latest chapter of The Ring cycle will even be distributed to school children visiting an exhibit of Russell's work at the Ashtabula Arts Center, but he still insists he isn't trying to teach them anything about opera.

"It's just about telling a good story," Russell says. "Besides that, I've always wanted to draw something that wouldn't make my non-comic book friends read out loud and laugh."