A conflicted Jeff Buckley followed the path of the father he never knew. 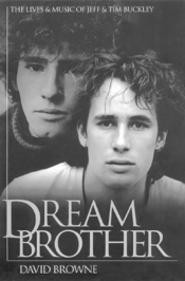 Dream Brother: The Lives & Music of Jeff & Tim Buckley is the story of two parallel lives linked, among other things, by their common musical talents and the tragedy of their early deaths. Tim Buckley was a '60s cult singer who died of a drug overdose in 1975 at the age of 28, while Jeff, the son he barely knew, released an acclaimed debut (1994's Grace) that made him a modern-day rarity -- a genuine career artist. He too met an untimely death, drowning in an offshoot of the Mississippi River in May 1997 at the age of 30.

Author David Browne, music critic for Entertainment Weekly, was a witness to Jeff's early musical performances and was one of the first journalists to interview him, relying on first-person conversations with friends, business acquaintances, and family members of the two. Browne was also granted access to Jeff's journals (with the permission of Jeff's mother and Tim's ex-wife, Mary Guibert), excerpts of which are quoted at the heading of each chapter, as well as personal letters and answering-machine messages.

Though Jeff spent his life attempting to forge his own identity, resentment toward his father coexisted with a certain fascination. Small wonder: Tim left his wife shortly before Jeff's birth, and father and son spent a grand total of roughly a week's worth of time together during their lifetimes. Still, their stories are inextricably intertwined, and fittingly, the author devotes one chapter to Tim, the next to Jeff, and so on. Giving equal attention to both the professional and personal aspects of his subjects, Browne offers a largely positive analysis of their musical output.

For Tim, who began his music career performing in a folk-oriented combo while still in junior high, music was an escape from a difficult home life that centered around a hard-drinking, mentally unstable father who routinely abused his son both verbally and physically. He found a kindred spirit in his feisty, independent-minded girlfriend Mary, who also had to contend with an abusive father. Under pressure to wed after Mary announced she was pregnant (which turned out to be that strange phenomenon known as an "imaginary pregnancy"), Tim was a thoroughly reluctant teenage bridegroom; before heading to the altar, he turned to his best man and admitted, "I don't want to go through with it."

He was far more dedicated to his music. With his band, the Bohemians, Tim honed his craft in various folk clubs, where he revealed an exceptional knack for improvisation. Later, he hooked up with former mercenary-turned-manager Herb Cohen and eventually moved to Greenwich Village with girlfriend Jane Goldstein (as a husband, he wasn't known for his loyalty).

Signing a six-album deal with Elektra, his self-titled debut was, deems Browne, "earnest and formal," yet "far from conventional," with songs that range from "charging folk rock" to "after hours art songs." Tim's desertion of his son seemed a natural by-product of his burgeoning music career (Mary had given birth to Jeff in 1966, divorcing Tim the following year). In Dream Brother, Tim isn't a sympathetic character: Though Browne depicts him as being guilt-ridden over his dereliction of duties as a parent, he never allowed his guilt to alter his hands-off policy regarding his son. Tim was a man of fluctuating moods and prone to impulsive behavior. One girlfriend alternately described him as having the "tongue of a killer" (humiliating waitresses was a favorite pastime), yet being a "delicate human being inside, very fragile." Browne suggests Tim suffered from a borderline personality disorder.

Though music was his main focus, he was disinterested in plotting career strategies or being famous, which didn't exactly advance his cause, sales-wise. Browne describes Goodbye and Hello, recorded in the Sgt. Pepper era, as "ornate," but the independent-minded Tim, who preferred working with jazz musicians, frequently bristled at his label's demands that he write in a more commercial vein. The performer, whose stage act became increasingly unconventional, had already moved past the guitar-strumming singer-songwriter phase when that sound came into vogue. If the more offbeat turn his music took displeased the execs, his attempts to appease the label by moving in a more radio-friendly direction were doomed to failure. Plagued by financial problems and a heroin habit (Browne doesn't go into the gory details), Tim's eventual death of a drug overdose was inevitable.

Jeff shared his father's stormy emotional makeup. His upbringing was somewhat tumultuous, with his mother struggling to support him and half-brother Corey while contending with marital and boyfriend problems. With a wisecracking demeanor that would give way to moody spells, Jeff was the school outsider ("My yearbook is in the ocean now," he once wrote). With an all-consuming passion for music, he possessed the unique ability to, in Browne's words, "hear a song once, instantly memorize it, and then play it straight throughout." At 17, Jeff enrolled in Hollywood's Musician Institute (a school for rock star wannabes), where he brushed up on his fusion techniques (i.e., amplified jazz), all the more to distance himself from his father's style (an ongoing obsession).

A man forever in search of his own style, Jeff's early performances found him playing in a reggae combo one moment and a heavy metal outfit the next. It wasn't until he performed at a tribute concert in honor of his dad that he garnered some much-needed attention. Following a stint in the rock group Gods and Monsters, Jeff had better luck as a solo artist.

"Watching him perform," writes Browne, "was akin to observing a rabid music fan rifle through a record collection and play treasured songs." Signed to Columbia in 1997, Jeff felt dogged by his father's shadow ("I'm convinced part of the reason I got signed is because of who I am," he said at the time, "and it makes me sad"). Like his father before him, Jeff recoiled at the demands of the music business. With Grace, a critically acclaimed debut, under his belt, he found himself at odds with the starmaking machinery and riddled with insecurities -- e.g., his occasional contempt for fans he was convinced valued him more for his pretty-boy looks than for his music. Buckley's mood swings and growing paranoia, which led him to believe he suffered from manic depression, may inspire sympathy on the part of the reader, but his fixation on his father's abandonment and the never-ending bitterness he experienced as a result may only function to exhaust the reader's patience. In the end, the man who spent his life trying to avoid all comparisons to his father had more in common with him than he would ever have wanted to admit.